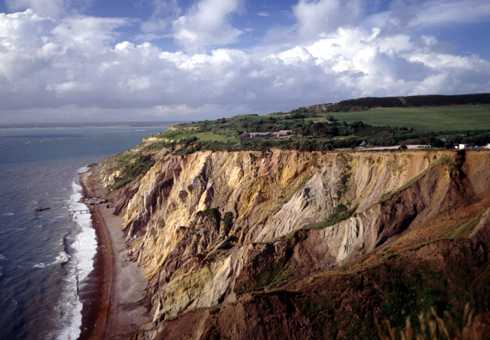 Isle of Wight (ancient Vectis), island and county, southern England, in the English Channel, and separated from the English mainland by the Solent, a narrow channel; Newport is the administrative center. Its principal topographical feature is an undulating range of chalk downs (hills), which traverses the island from east to west terminating in the Needles, three pointed chalk formations 30 m (100 ft) high, lying off the island's westernmost tip. Because of its mild and sunny climate and varied scenery the Isle of Wight is a major resort area. Cowes, on the northern coast, is a famed yachting center. Agriculture, shipbuilding, and the manufacture of aircraft are among the island's important industries. The Isle of Wight was inhabited in prehistoric times. It was occupied by the Romans in ad 43. In 661 it was annexed by the Anglo-Saxon kingdom of Wessex, and during the three centuries preceding the Norman Conquest (1066) of England it was repeatedly devastated by Danish raiders. The French pillaged the island several times, notably in 1377. Area, 395 sq km (152 sq mi); population (1991), 126,600.