Home
A Island
and Government

Wallis and Futuna Islands, overseas territory of France, in the southwestern Pacific Ocean. The territory consists of two groups of volcanic island... 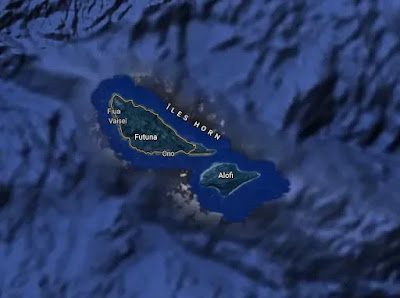 The Wallis Archipelago comprises a main island and some 20 smaller islands and islets. The main island, Wallis (Uvéa), is hilly and dotted with numerous lake-filled craters surrounded by steep cliffs. The Futuna Archipelago consists of two mountainous islands, Futuna (Hooru) and Alofi. On Futuna the land rises steeply from a narrow coastal plain to an extreme elevation of 875 m (2,870 ft). The coasts of Alofi are fringed by wide reefs; the highest summit here is 401 m (1,320 ft).

The climate is tropical, but moderated by ocean breezes. From October to April the weather is cool and dry with temperatures ranging between 20° and 25° C (68° and 77° F). A season of hurricanes with torrential rains and higher temperatures begins in April.

The capital of the territory is Matâ’ utu on Wallis Island; the total population was 15.289 in 2009.

Except for cattle, sheep, and goats introduced by the administration, the only indigenous animals are snakes, lizards, and pigeons. Coconut palms and breadfruit, mango, and orange trees are grown on the coasts, and the hills are densely forested.

The territory has an administrator, appointed by the French government and a 20-member territorial assembly, popularly elected for a 5-year term. The people, who enjoy all the rights and privileges of French citizenship, also elect one deputy and one senator to the French National Assembly.

Futuna and Alofi were sighted in 1617 by two Dutch navigators. Wallis was visited 100 years later by the British explorer Samuel Wallis. French Roman Catholic missions were established in the islands in 1837, and the indigenous people were converted to Christianity. In 1887 at the request of the kings of the islands a French protectorate was established. The people voted overwhelmingly, in December 1959, for French citizenship and status as an overseas territory, which was granted two years later.