INTRODUCTION OF SAINT VINCENT AND THE GRENADINES 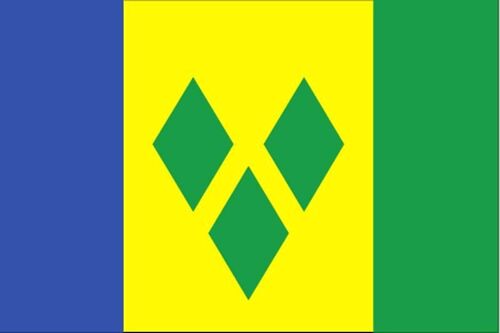 An active volcano named La Soufrière dominates the island of Saint Vincent. Except for this volcanic peak, lush green rain forests blanket the mountainous interior of the island. The sandy beaches and coral reefs of the Grenadines make these small islands popular with travelers, especially the wealthy who arrive by yacht or small aircraft. The country does not yet have an airport that can handle large international airplanes.

Saint Vincent and the Grenadines is the third smallest country in the Western Hemisphere in area, after Saint Kitts and Nevis, and Grenada. The country’s total area is 389 sq km (150 sq mi), of which the island of Saint Vincent constitutes 344 sq km (133 sq mi). The capital and principal port, Kingstown (population, 2003 estimate; 29,000), is located on the southwestern coast of Saint Vincent. Most of the country’s people are descended from black Africans who were brought to the islands as slaves.

LAND OF SAINT VINCENT AND THE GRENADINES

The island of Saint Vincent is volcanic in origin. Mountains covered by thick rain forest cross the island from north to south. The mountains rise to a maximum elevation of 1,234 m (4,049 ft) at La Soufrière in the northern part of the island. This active volcano erupted violently in 1821, 1902, and 1979. The 1902 eruption killed 2,000 people. The 1979 eruption blasted ash, steam, and rock up to 20 km (12 mi) in the air, and caused considerable agricultural damage. The people had been evacuated, and there were no casualties as a result.

Streams filled by heavy rainfall descend the steep mountain slopes to the sea, producing many waterfalls along the way. Most of the beaches on Saint Vincent are of black volcanic sand, but there are some white sand beaches on the southern end of the island. The larger Grenadines are generally much less rugged and hilly; Mount Toboi on Union Island, at nearly 305 m (1,000 ft), is the highest point. These islands are best known for their white sand beaches and the coral reefs that lie off many of their coasts.

The country has a tropical climate with strong trade winds blowing from the northeast. The average annual temperature is about 24° C (76° F). Saint Vincent’s average annual rainfall ranges from about 1,500 mm (about 60 in) on the southeast coast to about 3,800 mm (about 150 in) in the interior mountains.

Most of the trees and plants of Saint Vincent can be seen in the Botanical Gardens in Kingstown, which were founded in 1765 and are among the oldest in the Western Hemisphere. They include a breadfruit tree descended from the original brought to the island in 1793 by Captain William Bligh of the Bounty, from Tahiti. The national bird, found in the interior forests, is the endangered Saint Vincent parrot. Another protected bird unique to Saint Vincent is the whistling warbler, found in the tropical forest of the Buccament Valley on the western side of the island. Other rare birds in this area are the black hawk, the cocoa thrush, the crested hummingbird, the red-capped green tanager, and the green heron. Marine life is abundant in the coral reefs and offshore waters.

PEOPLE OF SAINT VINCENT AND THE GRENADINES

Blacks make up the great majority of the population. They are descended primarily from Africans who were brought to the islands in the 18th and 19th centuries to work as slaves. Almost 14 percent of the people are of mixed ethnic origins, with small minorities of whites and East Indians. About 2 percent are black Caribs, whose ancestry is African and Carib Indian. Many Vincentians have emigrated to the United Kingdom, the United States, and the other Caribbean islands in search of greater economic opportunities.

English is the official language, but an English-based Creole is the first language of most of the people. Anglicans and Methodists are the two major religious groups, but there are also congregations of Roman Catholics, Seventh-Day Adventists, and Hindus.

Education is compulsory in Saint Vincent and the Grenadines from the ages of 5 to 15, and government-run primary and secondary schools are free. There are few state-run secondary schools, however, and most students pay fees to attend private secondary schools. The literacy rate is about 96 percent.

ECONOMY OF SAINT VINCENT AND THE GRENADINES

Agriculture is central to the economy of Saint Vincent and the Grenadines although tourism is growing in importance. The chief commercial crop is bananas; sugarcane, arrowroot, and coconuts are also grown and exported. The country is the world’s leading producer of arrowroot, a starch used in cooking to thicken sauces. Marijuana is grown illegally and exported to other islands. Some livestock are raised, and efforts are being made to expand the fishing industry. Japan has granted funds to develop fisheries, jetties, and refrigeration plants.

The agricultural sector generally, and the output of bananas in particular, is vulnerable to weather conditions. Since the volcanic eruption of 1979 the agricultural sector has suffered from several other natural disasters, including hurricanes, drought, and tropical storms. A World Trade Organization (WTO) ruling in 1997 against the European Union’s special quota on Caribbean bananas imperiled Saint Vincent’s main market for its most important export, the European Union (EU). The EU had given preference to Caribbean-grown bananas over bananas from U.S.-owned plantations, but the U.S. government filed suit with the WTO, arguing that the quota was unfair. The WTO decided in favor of the United States.

Although tourism has grown in importance both on Saint Vincent and on Bequia, a small island noted for its beaches, the tourism industry still remains relatively undeveloped in comparison with other Caribbean islands. During the 1990s the Grenadines began to attract wealthy tourists and yacht owners. A number of celebrities have homes in the Grenadines.

The industrial sector is small-scale and dominated by food processing, although it also includes garment and metal manufacture, and some assembly of electronic components.

GOVERNMENT OF SAINT VINCENT AND THE GRENADINES

Saint Vincent and the Grenadines has a democratic parliamentary system of government and a written constitution that was adopted at the time of independence in 1979. The country is a member of the Commonwealth of Nations and recognizes the British monarch as its own monarch and head of state. The monarch is represented by the governor-general, but actual power is exercised by a prime minister, who is responsible to the parliament. The prime minister has by tradition been the head of the leading political party in parliament.

The single-chamber parliament, known as the House of Assembly, consists of 21 members; 15 are popularly elected, and 6 are appointed by the governor-general on recommendations from the prime minister and the opposition leader. Although Saint Vincent is divided into six parishes, it has no local government and all decisions are made on the national level. The main political parties are the New Democratic Party and the Unity Labour Party.

In addition to the Commonwealth of Nations, Saint Vincent and the Grenadines is a member of the Organization of American States, the United Nations, and the World Trade Organization. It has economic ties with other Caribbean countries through membership in the Caribbean Community and Common Market (Caricom).

HISTORY OF SAINT VINCENT AND THE GRENADINES

Saint Vincent was probably visited and named by Christopher Columbus in 1498 on his third voyage to the New World. The Carib people were living on the island at the time the first European travelers arrived. The Caribs fiercely resisted any attempts at European settlement for over 200 years. Coastal forts on the island have cannon ports that face inland; the Caribs were a greater menace to settlers than an enemy fleet.

The Caribs did, however, allow a cargo of Africans, shipwrecked in 1675, to settle on the islands and intermarry. Escaped slaves from other Caribbean islands were also allowed to seek refuge. Their black Carib descendents still live in the north of the island. As the number of black Caribs increased, tension mounted with the Carib and in 1700 there was a civil war.

The French were the first Europeans to settle the islands, and in 1719 they began to cultivate coffee, tobacco, indigo, and cotton on plantations worked by slaves. In 1722 the British arrived and possession of the islands was disputed. The British first assumed ownership in 1763 and finally wrested control from the French under the Treaty of Paris in 1783. The British army defeated the black Caribs in 1796 after a long conflict and deported over 5,000 of them to an island off the coast of Honduras.

By the time Britain gained control of the islands, Saint Vincent had proved suitable for growing sugarcane with slave labor. After Britain abolished slavery in the 1830s, the sugar plantations turned to Portuguese and East Indian immigrant laborers. Saint Vincent was not prosperous, however, and life was hard. The eruption of La Soufrière in 1902 devastated the northern half of the island, and economic conditions deteriorated further.

Self-rule was granted slowly to the islands under the collective name of Saint Vincent. In 1925 the first legislative council met; in 1951 all adults gained the right to vote; and in 1969 Saint Vincent and the Grenadines became a member of the West Indies Associated States with full autonomy over its internal affairs. Ten years later it was granted full independence.

On October 27, 1979, Saint Vincent and the Grenadines received full independence within the Commonwealth of Nations. That year the new country elected a government led by the Saint Vincent Labor Party. In 1984 the New Democratic Party won elections to the legislature, and its leader, James F. Mitchell, became prime minister. The party and its prime minister won reelection in 1989 and in 1994.

In 1998 general elections Mitchell’s NDP was voted in for a fourth term. The Labour Party polled 4,000 more votes than the NDP but failed to gain a parliamentary majority by just one seat (holding 7 of the 15 seats). Labour alleged widespread fraud, bribery, and intimidation, and threatened to take action unless there was a new vote. Mitchell remained in power. The government drew criticism from the United States and other Caribbean nations for not cracking down on drug smugglers and marijuana growers, and so enabling drug trafficking to flourish.

Antigovernment demonstrations led Mitchell to retire in 2000 and elections were held in 2001. A landslide victory by the Unity Labour Party (ULP) ended 17 years of rule by the NDP. The party’s leader, Ralph Gonsalves, became prime minister. Gonsalves and the ULP won reelection in December 2005.