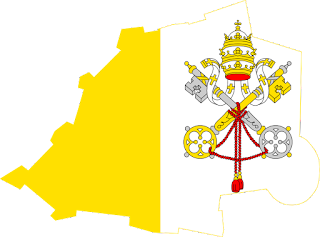 Vatican City, independent state within Rome, Italy, that is ruled by the pope and serves as the world headquarters of the Roman Catholic Church. Entirely surrounded by Rome, Vatican City is the smallest country in the world, with an area of 44 hectares (110 acres).

Vatican City occupies a triangular area on Vatican Hill in northwestern Rome, just west of the Tiber River. Except at Saint Peter’s Square (Piazza San Pietro) on its southwest flank, Vatican City is surrounded by medieval and Renaissance walls that separate it from the city beyond. Within its walls is a vast complex of courtyards, gardens, and magnificent buildings, the largest and most imposing of which is the great domed Saint Peter’s Basilica—the principal church of Roman Catholicism.

Vatican City has its own constitution, postal system, seal, flag, and other symbols of statehood. The Vatican also has its own army, the Swiss Guard, numbering about 100 soldiers. Vatican Radio is the official radio station, and powerful transmitters beam “the pope’s voice” to a global audience. In 2001 Vatican City had an estimated population of 1,000. Citizenship is gained by permanent residence in the Vatican together with the performance of special duties in the service of the Holy See (the jurisdiction of the pope).

Vatican City is the last remnant of the Papal States, a swath of territories in central Italy acquired over the centuries by the Catholic Church and governed by the pope. Vatican City was established in 1929 under terms of the Lateran Treaty, concluded by the Italian government and the papacy after many years of controversy. Under the treaty, the Catholic Church ceded all claims to the Papal States in return for financial compensation and sovereignty over the Holy See within the state of Vatican City.

LANDMARKS AND ATTRACTIONS OF VATICAN

Many of the most famous artists and architects of the Italian Renaissance were commissioned by popes to work on the Vatican’s buildings. The most important edifice is Saint Peter’s Basilica, a cavernous structure topped by a large ribbed dome. Built largely between the 15th and 17th centuries, and designed by artists such as Bramante, Michelangelo and Gianlorenzo Bernini, it is the world center of Roman Catholic worship. The basilica can hold up to 60,000 worshippers. In front of the basilica is Saint Peter’s Square. Considered a masterpiece of design, the immense keyhole shaped plaza is rimmed by two massive semicircular colonnades. At the center of the plaza is an obelisk from ancient Egypt brought to Rome in the 1st century AD by Roman emperor Caligula.

Adjacent to the basilica and square is the Palace of the Vatican, also known as the Papal Palace. It is a complex of buildings that contains more than 1,000 rooms and houses the papal apartments, the government offices of the Roman Catholic Church, several chapels and museums, and the Vatican Library. The most famous portion of the palace is the Sistine Chapel, best known for the awe-inspiring frescoes painted by Michelangelo on its barrel-vaulted ceiling (restored 1980-1990). The chapel’s walls were painted by famous Renaissance artists such as Sandro Botticelli, Pinturicchio, Luca Signorelli, and Domenico Ghirlandaio. Raphael’s Rooms, a part of the palace that holds papal apartments, are adorned with frescoes painted by the great Raphael.

The Vatican’s outstanding museums include the Gregorian Museum of Egyptian Art; the Gregorian Museum of Etruscan Art; the Pio Clementino Museum, with a superlative collection of antiquities; the Chiaramonti Museum; and the Vatican Pinacoteca, an art gallery with representative works by Italian masters. The Vatican Library has a priceless collection of ancient manuscripts and more than 1 million bound volumes. Also within the Vatican’s walls are the Government Palace and the Vatican Gardens.

Vatican City is governed by the pope, who holds absolute executive, legislative, and judicial powers. In practice, the executive powers are delegated to a governor, who is responsible to the pope. In the exercise of his legislative powers, the pope is advised and assisted by the Sacred College of Cardinals and by the various Sacred Congregations. The judicial powers are exercised by tribunals; appeals from their decisions are heard by the sacred Roman Rota and by the Supreme Tribunal of the Apostolic Signature. The Secretariat of State represents the Holy See in international relations, and it sends diplomatic representatives to countries around the world.

Swiss Guards maintain internal security and protect the pope. Saint Peter’s Square, which opens to the city of Rome, is subject to the authority of the Italian police. Castel Gandolfo, the papal summer palace outside Rome, as well as other buildings located in Rome but outside of Vatican City, are accorded the privileges of extraterritoriality.

Revenues from a variety of sources support Vatican City. They include contributions from Roman Catholics around the world (known as Peter’s Pence), interest on investments, and profits from its merchant bank, L’Istituto per le Opere di Religione. In addition, the Vatican sells stamps, tourist mementos, and collects fees for admission to its museums. The Vatican’s publishing operations are extensive. Books and pamphlets, published in multiple languages, are sold all over the world.

Vatican City uses the euro, the currency of the European Union (EU), although it is not an EU member. It maintains its own postal system, has a railroad station, and manages its own telephone and telegraph services. The Vatican’s daily newspaper, L’Osservatore Romano, is influential far beyond the walls of the city.

In Ancient Rome times, Vatican Hill and the valley below were used partly as a burial ground and partly as a circus for chariot races and other competitions. In the 4th century AD Roman Emperor Constantine the Great built a basilica over what is believed to be the tomb of Saint Peter, the first pope. After the 5th century, popes stayed in buildings near the basilica for special functions but lived mostly in the Lateran Palace outside Rome.

The area gained new importance in the 15th century, when the popes returned from Avignon, France, and took up official residence in the Vatican Palace. From there they ruled the surrounding Papal States, or territory in Italy owned by the Church. They decided to rebuild and enlarge Saint Peter’s Basilica and the Vatican Palace and to add the gardens and other buildings. This work continued, although in the late 16th century the popes and the government moved to the Quirinal Palace, outside the Vatican area.

The unification of Italy in 1870 resulted in the new government’s confiscation of the Papal States. For the next 50 years the popes, refusing to accept financial compensation or to recognize the Italian government, stayed inside the Vatican, imposing on themselves the status of prisoners. This situation, the so-called Roman Question, was resolved by the Lateran Treaty of 1929, negotiated by the Italian prime minister Benito Mussolini and representatives of Pope Pius XI. The treaty called for the Italian government to recognize Vatican City as an independent state under papal rule and to provide the Vatican with compensation for its earlier losses. In return, the Roman Catholic Church recognized Italy’s government with Rome as its capital. Since that time, all popes have continued to live in Vatican City.