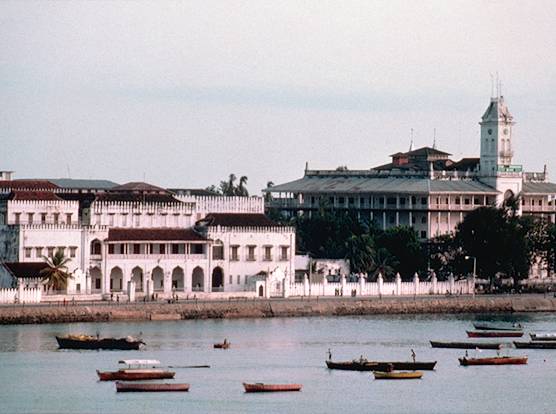 Zanzibar (island), island in the United Republic of Tanzania, located in the Indian Ocean 30 km (20 mi) off the East African coast. Zanzibar’s sister island of Pemba lies an equal distance to the northeast. Zanzibar extends 90 km (56 mi) north to south and 43 km (27 mi) east to west and has an area of 1,660 sq km (640 sq mi). Covered with luxuriant tropical plant life, Zanzibar is a low-lying coral island with elevations no higher than 120 m (400 ft). Temperatures average between 24º and 27ºC (75º and 81ºF) throughout the year and are tempered by ocean breezes. Zanzibar's average annual rainfall, influenced by Indian Ocean monsoon wind patterns, is more than 1,520 mm (more than 60 in). The island’s once prevalent forests have largely been replaced by cultivated crops, including cloves, bananas, and coconuts. Animal life is limited to small mammals and abundant birds.

The population of Zanzibar in 1995 was an estimated 456,934. The port city of Zanzibar is the island’s principal urban center and is located on Zanzibar’s sheltered western shore. Smaller Zanzibari towns include Chwaka on the eastern shore, Kizimkazi in the south, and Mkokotoni in the northwest.
Zanzibar’s principal inhabitants are black Africans, descendants of the indigenous Hadimu, Tumbatu, and Pemba peoples. These were Bantu-speaking peoples who immigrated to Zanzibar from the nearby mainland, drawn by the island’s fertile soils and abundant water sources. The indigenous peoples later became known collectively as Shirazi to distinguish them from more recent black African arrivals. By the 10th century Arabs from Oman and other parts of southwest Asia had settled on the island. The Arabs formed Zanzibar's political, social, and economic elite until the island’s 1964 revolution forced out most of the Arab population. Sunni Islam is the religion of most of Zanzibar’s inhabitants. A small Indian community that includes believers in Shia Islam as well as Hindus and other religious groups is also present. Swahili is the primary language of island residents, with Arabic and English holding lesser influence.
Agriculture is the dominant economic activity of Zanzibar. Major products include food crops and cloves. Zanzibar once led in clove production, supplying more than 90 percent of the world’s supply. Tourism is also important to Zanzibar’s economy. The Stone Town section of Zanzibar city reflects the port’s past importance and is a prime tourist attraction. In 2000 it was named a World Heritage Site. The city of Zanzibar is linked to the Tanzanian capital of Dar es Salaam by regular ferry connections, and the city also has an international airport.

By the 15th century Zanzibar was a minor member of a series of Arab and African commercial centers that stretched along the East African coast. In the late 15th century Portuguese explorers and colonists arrived on Zanzibar, which soon came under Portuguese influence. The Portuguese established small settlements on the island and maintained a major base at Mombasa on the coast of Kenya from the late 1500s to the late 1600s. However, by the mid-17th century, influence in the region began shifting to other European powers and to the Arabs of Oman. The Omanis ousted the Portuguese from Zanzibar in 1729.
Zanzibar's rise to importance within the sphere of East Africa and the Indian Ocean began during the reign of Sayyid Sa‘īd ibn Sultan, sultan of Oman and Zanzibar from 1806 to 1856. After winning firm control of his Arabian domains, Said turned his attention to East Africa and began a series of innovative agricultural reforms—including the introduction of clove plantations—that established Zanzibar's new role in the region. Sa‘īd instituted a loose form of control over much of the nearby mainland through commercial domination and a strong military presence on Zanzibar. By the time of Said’s death in 1856, Zanzibar was a leading producer of cloves; a major commercial hub for the exchange of African, Indian, European, and American merchandise; and a primary disseminating point for new influences—including the religion of Islam—into east central Africa.
Zanzibar’s increasing importance drew the attention of the United Kingdom, the dominant colonial power around the Indian Ocean in the 19th century. The British had worked closely with Said’s administration in Oman and continued this role in Zanzibar through a series of consuls, present on the island beginning in 1841. The British administrators helped stabilize the authority of Zanzibar’s Arab rulers; however, they opposed the Arabs on the important issue of slavery. Under Said’s leadership, Zanzibar had developed a vigorous slave trade. African slaves, who composed between 60 and 90 percent of the island’s population, worked on Zanzibar’s clove plantations and performed many other functions in the local economy. The harsh working conditions on the plantations had serious health consequences that made necessary the continuous import of new slaves from East and Central Africa. Slaves were also brought to Zanzibar to be exported, mostly to southwest Asia. The British government opposed slavery, and after the death of Said, his successors faced increasing British pressure to end the slave trade.
The unity of the Omani state ended in 1860 when the British oversaw the division of Zanzibar and Oman into separate sultanates. Said’s successors, Majid ibn Sa‘īd and Barghash ibn Sa‘īd, largely maintained control over Zanzibar for three decades, although the British forced Barghash to sign treaties abolishing the slave trade in the 1870s. In the mid-1880s Britain and Germany extended their imperial control over East Africa, and the sultanate of Zanzibar lost control of its mainland territories. In 1890 Zanzibar became a British protectorate.
Although the British administration encouraged trade in Zanzibar, the island gradually lost its commercial importance as the European colonies in mainland East Africa became more economically developed. Zanzibar evolved as a minor territory of the British Empire, a state with an economy that was overly dependent on the export of cloves. The British reorganized the governmental system established by Zanzibar’s Arab rulers, eventually creating a body called the Legislative Council with members appointed by the colonial authorities. The policies of the colonial administration strongly favored Zanzibar’s dominant Arab population over the black African population. The latter two groups held mainly subordinate positions within Zanzibari society; were largely without representation in the government; and were disadvantaged in areas such as economic assistance, labor, and education.
Once African colonies starting moving towards independence after World War II (1939-1945), the British began changing Zanzibar’s political system. A new constitution paved the way for the first free elections to the Legislative Council in 1961. However, the process of moving toward independence revealed the latent hostility present between Zanzibar’s Arab elites and the African population. Political parties became divided along ethnic lines, and Africans, suspecting electoral fraud, rioted following the elections. In 1963 elections the Arab-dominated Zanzibar National Party and its ally, the Zanzibar and Pemba Peoples Party, defeated the African-supported Afro-Shirazi Party; the two parties led the country to independence in December of that year. In January 1964, however, a revolutionary group, supported by most of the black population, seized power in a bloody rebellion. Zanzibar's last Arab sultan fled the country along with most of the Arab population. Under land-nationalization policies and other reforms, Zanzibar’s large clove and coconut plantations were broken up and distributed to smaller landholders, and rural patterns of life were greatly altered. In April 1964 Zanzibar joined with Tanganyika to form the new state of Tanzania. Within the union, Zanzibar retains its own administration for island affairs.