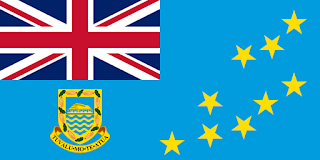 Tuvalu, small island country located in the western Pacific Ocean. Honolulu, Hawaii lies about 4,200 km (about 2,600 mi) to the northeast and Brisbane, on Australia’s eastern coast, lies about 3,400 km (about 2,100 mi) to the southwest. Tuvalu’s nearest neighbors are the Fiji Islands, about 1,050 km (about 650 mi) to the south, and Samoa (formerly Western Samoa), about the same distance to the southeast. Formerly known as the Ellice Islands, Tuvalu was part of the British Gilbert and Ellice Islands Colony (GEIC) until it separated from the Gilberts (now Kiribati) in 1975 and achieved independence in 1978. It is a member of the Commonwealth of Nations, an association of nations that includes the United Kingdom and a number of its former dependencies. The atoll of Funafuti is the capital of Tuvalu.

LAND AND RESOURCES OF TUVALU

Tuvalu is a chain of nine low-lying coral islands, extending from northwest to southeast for about 600 km (about 400 mi). None of the islands has an elevation of more than 5 m (16 ft). Five of the islands—Funafuti, Nanumea, Nui, Nukufetau, and Nukulaelae—are atolls (a ring-shaped group of islands surrounding a central lagoon). The remaining islands—Nanumaga, Niutao, Vaitupu, and Niulakita—are single islands with smaller lagoons. Tuvalu has a total land area of 26 sq km (10 sq mi). Tuvalu’s exclusive economic zone (EEZ)—that is, the area of the surrounding ocean where it controls fishing and other rights—is about 910,000 sq km (350,000 sq mi).

Tuvalu has thin, sandy soil. Coconut trees thrive almost everywhere, but other vegetation is limited. Land animals are likewise limited. Rats, lizards, and turtles are the main wild animals; domesticated animals such as pigs, chickens, dogs, and cats also are found in Tuvalu. The surrounding waters contain a wide variety of fish, octopus, and crab. Because of Tuvalu’s porous soil, the only source of fresh water is rain collected in catchment systems.

The tropical climate of Tuvalu is warm and humid throughout the year, with an average annual temperature of about 30° C (about 86° F). Rainfall varies considerably from year to year and between the wetter southern islands and the drier northern islands. Average annual rainfall is about 3,000 mm (about 120 in). Tuvalu lies outside the major cyclone zone belt.

Like other low-lying Pacific countries, Tuvalu has expressed concern that sea levels could rise as a result of global warming. The United Nations listed Tuvalu as among the nations most at risk of complete submersion due to global warming. However, research has been inconclusive as to the likelihood and extent of an impending catastrophe.

THE PEOPLE OF TUVALU

The population of Tuvalu was estimated at 12,373 in 2009, yielding an overall population density of 476 persons per sq km (1,233 per sq mi). About one-third of the people live on Funafuti in and around the capital; people continue to move there from the other islands in search of employment, thereby increasing governmental concerns about overcrowding there. About 1,000 Tuvaluans live and work overseas, particularly in the phosphate mining industry on Nauru.

Tuvaluans are almost all ethnic Polynesians. English and Tuvaluan, an Austronesian language, are the nation’s official languages. Most people are bilingual, and literacy rates are high. Education is free and compulsory between the ages of 7 and 14. There are two high schools and a maritime training school. The University of the South Pacific operates an extension center on Funafuti. Some students pursue higher education overseas.

Most of the population belongs to the Congregationalist Church of Tuvalu, a Protestant church. Other Christian denominations are also represented. The Baha’i and Islamic faiths have attracted a few converts in recent years. Social life centers around the church and family gatherings. Tuvaluans value harmonious social relations and modesty. Residents of the islands away from the capital live in traditional houses with raised foundations, open sides, and thatched roofs. On Funafuti, concrete block structures have largely replaced traditional buildings. Most of the people wear Western-style, casual clothing. Imported foods are popular, especially on Funafuti. Because fresh water is scarce, coconut milk is an essential beverage.

Tuvalu is listed by the United Nations as one of the world’s least developed countries. The Tuvaluan government requested this distinction in 1986 in order to qualify for loans from relief organizations such as the World Bank and the International Monetary Fund (IMF). The economy is mainly a subsistence one, especially on the outer islands. Tuvalu depends heavily on economic assistance for government and other major expenditures. Income from a trust fund established by Australia, New Zealand, and the United Kingdom in 1987 provides about half of the government’s recurring budget requirements. Other important sources of revenue include the sale of postage stamps designed for collectors, the sale of licenses to foreign fleets fishing within Tuvalu’s exclusive economic zone, and remittances from Tuvaluans working in the phosphate mining operation on Nauru and on ships around the world. In 1994 the gross domestic product (GDP) was estimated at $8 million, or about $800 per person.

Subsistence activities, particularly fishing and the cultivation of food crops such as coconuts, taro, pandanus, bananas, and payaya, dominate the domestic economy. Only about one-quarter of the total labor force engages in paid employment; about half of the wage earners work in the government service sector. The only major export is copra, the dried meat of the coconut, although small amounts of handicrafts are also exported. Imports, which far outweigh exports in value, include food, mineral fuels, machinery, and manufactured goods. Leading purchasers of exports are South Africa, Colombia, Belgium, and the Fiji Islands; imports come chiefly from the Fiji Islands, New Zealand, the United Kingdom, and the United States. The unit of currency is the Australian dollar (1.20 Australian dollars equal U.S.$1; 2007 average). Tuvalu also circulates its own coins locally.

Funafuti contains the only airport and the only major port. The airlines of the Fiji Islands, Nauru, and the Marshall Islands provide service to Funafuti. A shipping line provides limited international service, and a small government freighter shuttles among the outer islands. Roads are few and are surfaced with crushed coral rock. Diesel-powered generators provide electricity on Funafuti and some of the outlying islands. The government runs an AM radio station and publishes a biweekly newspaper.

Tuvalu is a constitutional monarchy with a parliamentary democracy. As a member of the Commonwealth of Nations, Tuvalu recognizes the British monarch as its own sovereign and, as such, its head of state. The monarch is represented in Tuvalu by a governor-general, who is appointed on the recommendation of the prime minister. The prime minister is head of government and is chosen by the parliament from among its members. The prime minister is assisted by a cabinet of four members, also chosen from the parliament. The 15 members of the parliament are directly elected to four-year terms. Seven of Tuvalu’s nine islands elect two members each to the parliament, the island of Nukulaelae elects one member, and the island of Niulakita is represented as part of Niutao. All citizens aged 18 or older can vote. There are no political parties. The judicial system consists of a High Court and a Court of Appeal, with island courts and magistrate courts to handle local matters on each island. Funafuti has a town council, and each of the other islands except Niulakita has an island council. Members of these councils are directly elected to four-year terms.

While archaeological research suggests that Tuvalu has been inhabited since about the 5th century AD, little is known about its early history. However, the Tuvaluan language is related to Samoan, and Samoa is believed to be the first settlers’ place of origin.

Spanish explorer Álvaro de Mendaña de Neira sighted Nui on his first voyage to the Pacific in 1568 and Niulakita on his second voyage in 1595. Significant European contact did not occur until the 19th century. In 1819 British captain Arent De Peyster sighted Nukufetau and Funafuti, which he named Ellice Island after the owner of his ship, British politician Edward Ellice. All of the islands of present-day Tuvalu were sighted by 1826, and soon the entire island group became known as the Ellice Islands.

Between 1820 and 1870 American and British whalers frequented the islands, and some settled ashore. Many of the settlers began exporting coconut oil, and later copra, to firms in Australia, Germany, and the United States. In 1856 the United States claimed the four southern islands of the group to mine guano deposits in the region. In the 1860s labor recruiters known as blackbirders abducted about 400 native islanders to work in the mines of Peru. This, combined with the spread of European diseases, significantly reduced the native population on the islands.

In 1865 British missionary A. W. Murray of the London Missionary Society placed on the islands Samoans who had recently adopted Christianity and charged them with spreading the religion. Almost the entire population quickly adopted Christianity. They abandoned traditional customs that conflicted with the new faith, effecting a major transformation of the society on the islands.

After the war many Ellice Islands residents moved to Tarawa in search of better educational and employment opportunities, increasing the tensions and rivalries that had existed between the peoples of the two island groups throughout the colonial era. Ellice Islanders, who were culturally and linguistically Polynesian, began to fear losing their identity amidst the Micronesian Gilbertese, who comprised the vast majority in the GEIC. In a 1974 referendum residents of the Ellice Islands voted overwhelmingly for separation from the Gilbert Islands, and the following year the two were legally separated. The Ellice Islands became the independent nation of Tuvalu on October 1, 1978. Tuvalu continued relations with the United Kingdom as a member of the British Commonwealth of Nations.

Under a 1979 treaty of friendship with Tuvalu, the United States gave up its claims to the four southern islands. In 1992 a member of parliament proposed a motion that would make Tuvalu a republic independent of British association, but only one out of the eight governmental districts supported the proposal. In the mid-1990s a committee appointed by parliament continued to study the possibility of making Tuvalu a republic.