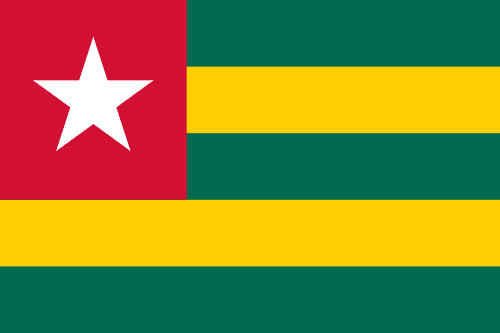 LAND AND RESOURCES OF TOGO

In the south of Togo is a narrow, low-lying coastal belt containing a series of inland lagoons. To the north lies a plateau region that increases in elevation from about 60 m (about 200 ft) in the south to about 425 m (about 1,400 ft) to the northeast. A central chain of hills, the Akwapim-Togo Ranges, extends across the country from southwest to northeast. They have an average elevation of about 700 m (about 2,300 ft) and reach a maximum of 986 m (3,235 ft) in Mount Agou (Pic Baumann) in the southwest. To the north of the hills lies a plateau drained by the Oti River; the terrain increases in elevation and becomes more rugged to the northeast. Much of the southern part of the country is drained by the Mono River and its tributaries.

The climate of Togo is tropical. Average annual temperatures range from 27°C (81°F) at the coast to 30°C (86°F) in the north. The south has two rainy seasons, from March to July and from October to November; the average annual rainfall on the coast is about 890 mm (about 35 in). It doubles in the mountains a few kilometers inland. The north has one rainy season (April to July) and receives nearly all of its annual precipitation (1,140 mm/45 in) during this period.

Plant and Animal Life in Togo

Mangrove swamps dot the coastal regions of Togo, and coconut palms are cultivated in great numbers for about 160 km (about 100 mi) inland. Where not cultivated, the coastal plain is covered with dense scrub. Farther inland are tropical forests of hardwood, dyewood, and oil palm, and tall silk cotton trees grow in the southwest. Beyond is the broad northern plain with its open savanna country dotted with giant baobab trees.

Togo’s animal life is typical of West Africa. Crocodiles, hippopotamuses, and a great variety of fish live in the Oti River. Duikers (small African antelopes), monkeys, and several species of snakes roam the forest areas, and baboons, antelopes, lions, and elephants are found (in diminishing numbers) in the northern savanna.

Togo has significant reserves of phosphates, and limestone and marble are also quarried. The country’s rivers produce hydroelectricity.

Togo’s growing population has placed increasing pressure on the country’s natural resources. The need for fuelwood has resulted in a very high rate of deforestation. This has led to the desert encroaching from the north, although the government has launched a reforestation program to try to halt the desert’s advance. About 11 percent (2007) of the country’s total land area is protected in national parks or game reserves.

Many different ethnic groups make up Togo’s population. The principal groups in the south are Ewe-speaking peoples. In the north, the Kabiyé (or Kabre) and Gurma are most numerous.

The population of Togo (2009 estimate) is 6,019,877, giving the country an overall population density of 111 persons per sq km (287 per sq mi). The majority of the people are farmers or pastoralists and live in small villages. The capital and principal city, Lomé, is also the leading port. Other important towns include Kpalimé and Atakpamé in the south; and Sokodé, Lama-Kara, and Niamtougou in the north.

Language and Religion in Togo

French is the official language of Togo and is used in administration and commerce. Ewe and Kabiyé are the principal African languages and are used along with French in the schools. About 38 percent of the people adhere to traditional religions; 34 percent of the population are Christians, and 19 percent are Muslims.

About 25 percent (1996) of Togolese government expenditures are devoted to education. In 2006 nearly all primary school-aged children attended school, but only 39 percent of secondary school-aged students were enrolled. Missionary schools remain important in the country, educating about half the pupils. Higher education is available at the University of Lomé (founded in 1965) and the University of Kara (2004), in the northern town of Lama-Kara.

The economy of Togo is dominated by subsistence and commercial agriculture, and is therefore subject to downturns due to droughts. Mineral products are a major source of foreign exchange. In 2005, agriculture accounted for 41.8 percent of Togo’s gross domestic product (GDP), which measures the value of goods and services produced; industry accounted for 22.9 percent; and services accounted for 35.3 percent.

Some 66 percent of Togo’s labor force is engaged in agriculture; these farmers cultivate 46 percent of the country’s land. The principal food crops are cassava, yams, corn, millet, and sorghum. The leading export crops are coffee, cotton, groundnuts, and cacao. Livestock, chiefly sheep and goats, are raised on the northern plateau. Fish are caught in Togo’s rivers and in the Gulf of Guinea.

Mining and Manufacturing in Togo

Togo is a leading producer of phosphates, which are by far the country’s most significant mineral product. In 2007, 300,000 metric tons of phosphate rock were mined. Industrial activity is limited but growing. The leading manufactures include cement, flour, roasted coffee, palm oil, cotton textiles, and beverages.

Currency and Banking of Togo

The unit of currency in Togo is the CFA franc, consisting of 100 centimes. (479 francs equal U.S.$1; 2007 average). The CFA franc is issued by the Central Bank of West African States. Lomé is the center of Togo’s banking activities.

A north-south road system links the port of Lomé with Burkina Faso. About 32 percent of Togo’s road’s are paved. The country is also served by a railroad network that includes three north-south lines. Lomé is the country’s major port; the port of Kpémé handles phosphate shipments. International airports are located near Lomé and in the northern town of Niamtougou.

Togo was governed as a single-party republic from 1969 until 1991. That year, opposition parties were allowed to form, and in 1992 a new constitution officially established the country as a multiparty democracy.

The 1992 constitution vests executive power in a president who is popularly elected to a five-year term. Legislative power is exercised by the unicameral (single-chamber) National Assembly; its 81 members serve five-year terms. The prime minister is appointed by the president from among the majority in the legislature.

The highest court of Togo is the Supreme Court, located at Lomé. Criminal justice is administered by two appeals courts, a tribunal of first instance, and several special tribunals. A tribunal of state security was established in 1970.

The Rassemblement du Peuple Togolais (RPT, or Togolese People’s Assembly) was the sole political party from 1969 until 1991, when opposition parties were legalized. By the mid-1990s dozens of parties were officially acknowledged.

Most of the ethnic groups inhabiting Togo are descended from peoples driven into the area during the 18th and 19th centuries, except for the Ewe, who left the Niger River area for Togo some time between the 11th and 16th centuries. During the 18th and 19th centuries, the area was under pressure from the Akwamu confederacy and the Ashanti Kingdom to the west and from the Kingdom of Dahomey to the east. Togo was a part of the Slave Coast, a primary area of European slaving activities. Small slave posts were established in that region in the 17th century, but most of the slave trade was carried on in Dahomey (now Benin) and the Gold Coast (now Ghana).

The German protectorate of Togoland was established in 1884, when the rulers of the region signed a treaty granting suzerainty to the Germans. From 1887 to 1889, Germany, Britain, and France fixed the territorial limits of the protectorate. The Germans created the port of Lomé and developed the resources of the region. During August 1914, the first month of World War I, the Germans surrendered the region after an invasion by French and British forces.

In 1920 the final division of the area between the two countries took place, and Lomé and the entire coastline were assigned to French Togo in exchange for an enlarged British territory in the interior. In 1922 the League of Nations granted both nations mandates over their respective territories. On December 13, 1946, the United Nations (UN) granted France and the United Kingdom trusteeships over Togo to supersede the mandates established by the League of Nations. As a result of a plebiscite held in 1956, the British territory became part of the Gold Coast and was later incorporated into Ghana. In another UN-supervised plebiscite in 1958, a majority of the votes in the French territory was gained by the National Union Party, which favored complete independence. Sylvanus Olympio, head of the party, became premier. In February 1960 Olympio rejected the suggestion advanced by President Kwame Nkrumah of Ghana that the two countries be united. Togo achieved independence on April 27, 1960, and was admitted to the UN in September.

President Olympio was assassinated in January 1963, during a military coup. The army selected Nicolas Grunitzky to form a provisional government, and he subsequently assumed the office of president. A new constitution was approved by a national referendum. In January 1967 the army staged another coup, installing Lieutenant Colonel Étienne Eyadéma (later Gnassingbé Eyadéma), the army chief of staff, as head of government. The constitution was abrogated and the legislative body dissolved. In April Eyadéma assumed the offices of president and defense minister. A new party, the Rassemblement du Peuple Togolais (RPT, or Togolese People’s Assembly), was founded in 1969. In 1970 a plot to overthrow Eyadéma was foiled. In early 1975 a treaty between 46 developing nations and the European Community (now the European Union) was signed in Lomé.

President Eyadéma promulgated a new constitution in December 1979, under which he was almost unanimously reelected to office. In January 1980, the 13th anniversary of his coup, he proclaimed the Third Togolese Republic. France sent troops to Togo in September 1986 to help suppress a coup attempt. Reelected to another seven-year term in December 1986, Eyadéma apparently bowed to popular pressure in August 1991 and agreed to split power with a transitional government, pending democratic elections. In subsequent months, however, troops loyal to Eyadéma repeatedly tried to overthrow the interim regime.

A 1992 national referendum approved a new, multiparty democratic constitution that established a two-term limit on the presidency, effective at the next election. Eyadéma was reelected in 1993 multiparty elections. In April 1994 he appointed Edem Kodjo prime minister of a new coalition government, formed as a result of legislative elections held that February. Eyadéma was declared the winner of June 1998 elections that were widely criticized as fraudulent by Togolese opposition parties and international observers.

In 2002 Togo’s legislature approved a constitutional amendment removing the term limit on the presidency, allowing Eyadéma to run again in 2003. The move was denounced by opposition parties.

Eyadéma died in February 2005, after 38 years in power, and the Togolese military swiftly installed Eyadéma’s son Faure Gnassingbé as the country’s new ruler. He stepped down three weeks later following intense diplomatic pressure from other West African nations, but he went on to be elected president of Togo by popular vote in April.