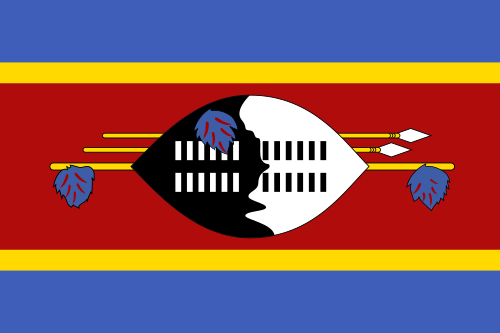 Swaziland, independent monarchy in southeastern Africa, bounded on the east by Mozambique and on the southeast, south, west, and north by South Africa. It covers an area of 17,363 sq km (6,704 sq mi).

LAND AND RESOURCES OF SWAZILAND

Swaziland is roughly oval-shaped. The elevation of the land decreases from west to east. The mountainous western portion in places reaches an altitude of more than 1,200 m (more than 4,000 ft) above sea level. The hilly central region, or veld (grassland), has an average elevation of about 600 m (about 2,000 ft). The eastern region, or low veld, is a rolling area that averages from 120 to 300 m (about 400 to 1,000 ft) above sea level; it is bounded on the east by the Lebombo Mountains. The principal rivers are the Komati, Lusutfu, and Umbuluzi. The steady flow of the rivers, fed by abundant rain in the mountains, supports irrigation and hydroelectric power projects in the lowlands. Swaziland also has quantities of several valuable minerals, including coal, asbestos, diamonds, and gold.

The climate is mostly temperate, with cool temperatures at higher elevations and more tropical weather in the low veld. Precipitation, which is heavier toward the west, is concentrated in the warmer months of October through April; the rest of the year is characterized by sunny, clear weather. The temperature in Mbabane, located in the western highlands, ranges from 15° to 25° C (59° to 77° F) in January and 6° to 19° C (42° to 67° F) in July.

Nearly all of the people in Swaziland are ethnic Swazi, although there are small populations of Zulu, Tsonga, Asians, and Europeans. About 62 percent of the country’s land has been set aside by the monarchy for exclusive use by the Swazi people. Much of the remaining land is owned by Europeans or foreign companies.

The population (2009 estimate) is 1,123,913, giving Swaziland a population density of 65 persons per sq km (169 per sq mi). In 2009 the annual population growth rate was estimated at -0.5 percent. The capital and principal town is Mbabane (population, 2003 estimate, 70,000). Lobamba is the traditional royal capital. Some 23 percent of the population lives in urban areas.

About 86 percent of Swaziland’s people are Christians, and 11 percent hold traditional religious beliefs. The official languages of Swaziland are siSwati, a Bantu language, and English, in which most government business is conducted. In 2009 life expectancy at birth was estimated to be 32.1 years for women and 31.6 years for men.

In 2005 some 221,596 children attended primary schools, and some 71,124 were enrolled in secondary schools. The University of Swaziland (1964) is in Kwaluseni. The literacy rate is estimated to be 83 percent.

Swaziland’s labor force is split between two dominant sectors, agriculture and services. Some 26 percent of its workforce engaged in crop or livestock production, while another 48 percent hold service jobs. The country’s economy is tied to that of South Africa through trade and currency links, and can rise or fall depending on the fortunes of its large neighbor. Gross domestic product in 2007 was $2.9 billion, or an average of $2,521.40 per person.

About three-quarters of the population live on Swazi national land, most cultivating staple crops of maize or herding livestock. The country’s most productive farmland, however, are the tracts in private hands, which produce about 75 percent of the country’s exports. Chief cash crops are sugarcane grown on irrigated land, cotton, citrus fruits, and pineapples. Livestock includes 585,000 cattle and 276,000 goats. Swaziland also has an important forestry industry. Much of the 541,000 hectares (1,336,840 acres) of forestland is devoted to production of pine. Because of a favorable climate, pine reaches maturity in Swaziland more than twice as fast as in Europe.

Swaziland has large reserves of anthracite coal, which with asbestos form the country’s mineral exports. Asbestos extraction has diminished in recent years because health risks associated with the material have decreased its use. Industrial diamond mining began in the mid-1980s. Much of Swaziland’s manufacturing is related to agricultural and wood processing. The tourism industry is growing; some 870,000 people visited Swaziland in 2007, attracted by the country’s game preserves and mountain scenery.

The principal exports are sugar, wood and wood pulp, canned and fresh fruit, and mineral products. Along with Botswana, Namibia, and Lesotho, Swaziland is a member of a customs union with South Africa, and the country is Swaziland’s chief trading partner. The unit of currency is the lilangeni (plural: emalangeni), which is maintained at an equal value with the South African rand (7 emalangeni equal U.S.$1; 2007 average).

Swaziland has 294 km (183 mi) of railroads, linking it to the ports of Maputo in Mozambique and Richard’s Bay and Durban in South Africa. The road system extends 3,594 km (2,233 mi). The country’s only large airport is at Matsapa, near Mbabane.

National executive power in Swaziland is vested in a king who appoints, and is assisted by, a prime minister and cabinet. One house of parliament is the National Assembly, which has 65 members, 55 of whom are directly elected from a list of candidates nominated by traditional local councils or directly elected and 10 appointed by the king. The 30-member Senate includes 10 members who are elected by the National Assembly and 20 who are appointed by the king. Judicial authority is vested in a high court and subordinate courts. Civil matters among Swazi are handled by traditional leaders, subject to appeals to the High Court.

The earliest known people in what is now Swaziland were the Ndwandwe, who lived in the southeast. In the mid-18th century the Ndwandwe defeated the Ngwane people, who had entered the region from the south. The Ngwane settled in the southwest, and warred periodically with the Ndwandwe. The early 19th century was marked by a prolonged series of local wars, centering around the powerful Zulu to the south (see Mfecane). Ngwane leader Sobhuza led his people to higher elevations around 1820 to escape Zulu attacks. In this period the Ngwane became known as the Swazi, and Sobhuza established the Swazi kingdom in what is now central Swaziland.

When European settlers entered the area during the 1880s, the Swazi granted concessions to them that endangered the independence of the territory. An Anglo-Boer convention of 1894 placed Swaziland under the administration of the Union of South Africa (now the Republic of South Africa). Administration passed to the British governor of Transvaal in 1903 and to the British high commissioner for South Africa in 1907. In 1967 Swaziland became internally self-governing. The nation attained full independence on September 6, 1968, with King Sobhuza II as head of state. The king suspended the constitution in 1973 and banned all political activity; under a new constitution, promulgated in 1978, a bicameral parliament was indirectly elected. Following the death of Sobhuza in 1982, a power struggle ensued to determine which of the king’s wives would rule as queen regent and which of his many sons would ascend the throne. In 1986 Crown Prince Makhosetive was installed as King Mswati III.

Shortly after assuming the throne Mswati consolidated his power by abolishing the Liqoqo, an advisory body that traditionally gave binding suggestions. During the late 1980s and early 1990s members of organized political parties, which are illegal under the Swaziland constitution, secretly criticized the king and government. Their continued call for more accountability in government led Mswati to open public dialogue on changes to the political process. As a result of this dialogue, a majority of the National Assembly was directly elected for the first time in 1993. In 1994 the king announced that a new constitution would be drafted incorporating the new election process. In 1996, after no progress had been made, the king appointed a constitutional reform commission to hear proposals for a draft constitution. In the following years the king and the commission were criticized by many Swazis for blocking the reform progress. Opposition groups staged a boycott of October 1998 elections to the National Assembly.