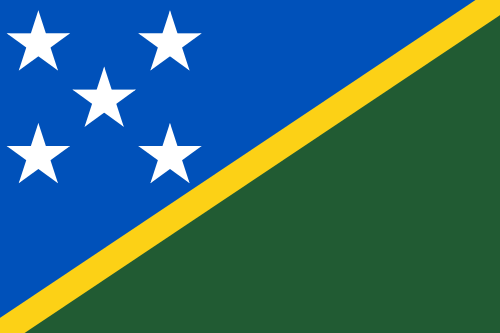 Solomon Islands is a mountainous country; the highest peak, Mount Popomanaseu on Guadalcanal, rises to an elevation of 2,331 m (7,648 ft). The mountains are of volcanic origin. The climate of Solomon Islands is hot and humid.

The population (2009 estimate) is 595,613. The capital and principal port is Honiara (population, 1990 estimate, 35,288), on Guadalcanal. Melanesians (see Melanesia) make up 93 percent of the population, with a small minority of Polynesians. Solomon Islands has a high birth rate, which has resulted in low literacy rates and a high level of unemployment. English is the official language, although Pidgin is more widely spoken; some 80 local languages are also used.

ECONOMY AND GOVERNMENT OF SOLOMON ISLANDS

The chief products of Solomon Islands are copra, timber, rice, cacao, processed fish, sweet potatoes, plantains, pineapples, and trochus shells (used in making buttons and ornamental objects). Large deposits of bauxite and phosphate rock are found here, and alluvial gold is produced on Guadalcanal. In the early 1990s logging accounted for more than half of Solomon Islands’ export earnings. However, forests are being logged at unsustainable levels. In 1994 the government proposed that a logging ban take effect beginning in 1997.

The Solomon Islands is governed according to a 1978 constitution, which took effect when the country gained independence from Great Britain. Although fully independent, the Solomon Islands is a member of the Commonwealth of Nations that chooses to recognize the British monarch as its own sovereign and, as such, its symbolic head of state. Real power is vested in the prime minister, who is head of government. The prime minister is chosen by and must have the confidence of the nation’s popularly elected 50-member unicameral parliament.

The Solomon Islands were visited and named in 1568 by the Spanish navigator Álvaro de Mendaña de Neira. The northernmost islands of the group were explored in 1768 by Louis Antoine de Bougainville, for whom the island of Bougainville is named. Germany established control over the northern Solomons in 1885, but in 1900 it transferred these islands, except Bougainville and Buka, to the British, who had declared a protectorate over the central and southern Solomons in 1893. In 1914, at the start of World War I, Australia occupied the remaining German Solomons, and in 1919 the League of Nations granted the area to Australia as a mandate. Most of the Solomons were occupied by Japan during World War II (1939-1945), and heavy fighting occurred in the region, especially on and around Guadalcanal, before the Allies forced the last Japanese to leave the island group in 1945. In 1975 the Australian-administered Solomons became independent as part of Papua New Guinea. The British Solomons gained independence as Solomon Islands on July 7, 1978.