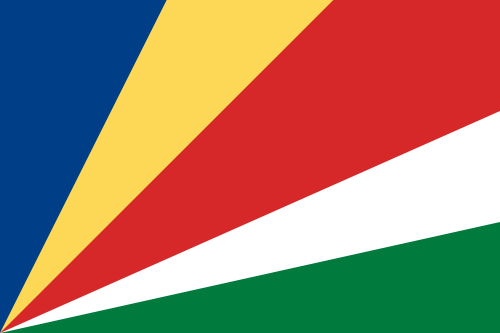 Seychelles, island republic in the western Indian Ocean, northeast of Madagascar. The Seychelles are an archipelago of some 115 islands with a total land area of 455 sq km (176 sq mi).

LAND AND RESOURCES OF SEYCHELLES

The country consists of two distinct island groups: the Mahé group in the north and a chain of low-lying coral islands stretching to the south. All the country’s principal islands belong to the Mahé group; they include Mahé Island (the largest), Praslin, Silhouette, La Digue, and 28 smaller islands. The 83 coral islands are largely without water resources, and most are uninhabited.

Rising abruptly from the sea, the Seychelles are the exposed part of a submarine bank in line with Madagascar, with which they show similarities in geology and native plant and animal life. They have, however, some unique plants, such as the coco de mer (sea coconut), a coconut with a two-lobed nut in one husk. The highest peak is Morne Seychellois (905 m/2,969 ft) on Mahé. Most of the larger islands are of granite formation and the smaller ones coral.

The population of the Seychelles (2009 estimate) is 87,476. The capital, principal city, and leading port is Victoria on Mahé Island. About 90 percent of the country’s population lives on Mahé. Most people are of mixed French and African descent; Indian and Chinese minorities are also present. The official languages are Creole (a patois based on French), English, and French. Some 98 percent of the population is Christian, most of them Roman Catholic.

Tourism and tuna fishing are the principal drivers of the Seychelles economy. Receipts from tourism were $285 million in 2007, when 161,000 tourists visited the country. Seychelles fishers net enough tuna to satisfy domestic need and supply a significant canning industry. Various fruits are grown for domestic consumption, but the staple food, rice, must be imported. Besides canned tuna, exports include petroleum (imported and then reexported), copra, and cinnamon bark. Guano is the country’s only mineral resource. An international airport and major port are located at Victoria.

Under the country’s 1993 constitution, executive power is held by a president, who is popularly elected to a five-year term. The president appoints a council of ministers to act as an advisory body. Legislative power is vested in the National Assembly, which has 25 popularly elected members and 9 members selected on a proportional basis. The Seychelles People’s Progressive Front (SPPF) is the leading political group; opposition parties were legalized in 1991. The Seychelles is a member of the Common Market for Eastern and Southern Africa (COMESA), the Indian Ocean Commission (IOC), and the Commonwealth of Nations.

Possibly known to Arabian mariners as early as the 9th century AD, the Seychelles were visited by the Portuguese in 1502. In 1756 France claimed the islands, which were then uninhabited, and French planters and their slaves settled on them, beginning in 1768. In 1794 Great Britain annexed the Seychelles. The islands were administered from Mauritius during most of the 1800s, and in 1903 they were made a separate British dependency.

Political parties, chief of which were the Democratic Party led by James Mancham and the SPPF headed by Albert René, began to form in the 1960s. Their agitation resulted in a new constitution in 1967, and three years later a ministerial form of government was established. By 1974 both major parties were united in calling for independence, although otherwise bitterly antagonistic. When independence was achieved, on June 29, 1976, a coalition republican government was formed, with Mancham as president and René as prime minister. A year later, while Mancham was abroad, SPPF supporters staged a coup and installed René as head of state. In 1978 René declared the country a one-party state, and a new constitution to that effect was proclaimed in 1979. An attempt by South African-based mercenaries to restore Mancham to power was thwarted with Tanzanian help in 1981, and an army mutiny was similarly thwarted in 1982. Several more coup attempts were suppressed in the late 1980s.

Seychelles turned toward a multiparty system in 1991. The nation’s economy grew steadily in the 1990s, and René was reelected in 1993, 1998, and 2001. René retired from office in April 2004 and handed the presidency to his vice president, James Michel.