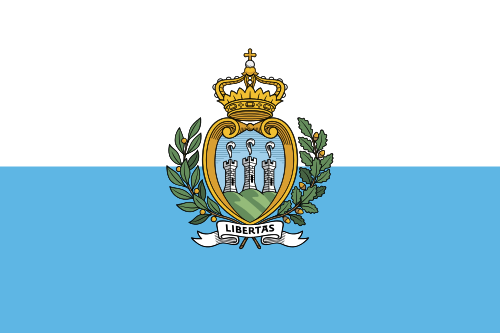 San Marino, independent nation in southern Europe. San Marino is located in the Apennine Mountains of northern Italy, near the seaside resort of Rimini on the Adriatic Sea. Entirely surrounded by Italian territory, San Marino is one of the world’s smallest countries, with a total area of only 60.5 sq km (23.4 sq mi). In Europe, only Vatican City and Monaco are smaller in area.

A rugged land, tiny San Marino is dominated by Mount Titano, a craggy limestone mountain that rises to 739 m (2,425 ft). Forests and pastures cover the foothills. High on the slopes of Titano is the old town of San Marino, the capital of the republic and a popular tourist attraction. Defensive fortifications perch atop each of Titano’s three summits. Since the early Middle Ages, San Marino’s rugged terrain, lack of natural resources, and relative isolation have helped preserve it from conquest by more powerful neighbors.

According to local tradition, San Marino was founded in the 4th century AD and is the oldest surviving republic in Europe. Legends trace the republic’s founding to 301, when a Christian stonemason sought refuge from religious persecution on Mount Titano among a small community of followers. San Marino’s continued independence is guaranteed by a customs union and friendship treaty with Italy, first signed in 1862 and revised several times since then.

San Marino is located in the central Apennines, east of Florence, Italy. The highest point, the three-peaked Mount Titano, commands a wide view of the Adriatic shore located 19 km (12 mi) away. Most of the republic lies in the basin of the Marecchia River, which empties into the Adriatic. The climate is mild with an average annual precipitation of 690 mm (27 in).

Because tourism is San Marino’s main economic activity, environmental pressures are not serious. Existing problems are generally related to air pollution from automobile traffic and acid rain produced by industries outside San Marino.

The population of San Marino (2009 estimate) is 30,324. Nine out of ten people in San Marino live in urbanized areas. The official language of San Marino is Italian, but many residents speak Emiliano-Romagnolo, a Romance language similar to Italian, as a first language. San Marino’s people are mostly Roman Catholic, and for many residents Catholic holy days are occasions for religious devotion.

The capital is San Marino (population, 2003 estimate, 4,601), a community perched on the rugged western slopes of Mount Titano. Government offices are located in the town. Ancient defensive walls encircle the city. Towers rising from Mount Titano’s three heavily fortified summits can be seen from many parts of the town. Floodlights light up the towers against the night sky. At the city’s edge, the mountain drops nearly 300 m (1,000 ft).

Other population centers include Borgo Maggiore, a market town located 185 m (600 ft) below the capital on the mountain’s lower slopes, and Serravalle, a manufacturing center to the north.

San Marino is a prosperous country whose citizens enjoy a high standard of living, exceptionally low unemployment, and extensive social welfare benefits. The economy is so strong that thousands of Italian residents commute into San Marino each day to work.

Tourism drives the economy. More than 3 million people visit the country each year to see its rugged, picturesque beauty and ancient fortifications, many of which have been restored. Tourism accounts for more than half of all revenue generated in San Marino. During the 1990s, San Marino developed a dynamic and profitable finance sector. The country’s political stability and low taxes have driven much of this growth. San Marino’s finely printed postage stamps and unique coins are coveted by collectors and provide another important source of revenue.

Traditionally, most San Marinese made a living by growing food crops, grazing livestock, and quarrying stone. The quarries are largely exhausted, but agriculture remains a visible part of life in San Marino, especially cattle rearing and the production of cereal grains, olives, and grapes. Since World War II, San Marino has developed some light industries, include textiles and clothing, wine and cheese, leather goods, cement, synthetic rubber products, and ceramics.

San Marino belongs in a customs union with Italy. Under the terms of the union, San Marino pays customs duties on goods that pass through Italy to reach San Marino. In addition, the union prohibits San Marino from opening gambling houses and allows Italy to preserve monopolies on sales of tobacco and other goods. In exchange, San Marino receives an annual subsidy from Italy called the Canone Doganale.

Like Italy, San Marino uses the euro, the currency of the European Union (EU), although San Marino is not an EU member. San Marino mints its own coins, but no paper currency. Previously, the republic minted the San Marinese lira, which could be exchanged at face value for the Italian lira. San Marino received permission to issue a limited number of its own euro coins, allowing it to preserve a specialty market for its coins.

A highway links San Marino to Rimini on the Adriatic coast. San Marino has no internal railroads, apart from a short cable-operated line (see Funicular) connecting Borgo Maggiore and the capital city, but it has over 100 km (62 mi) of good roads. The closest airport and railroad terminus is in Rimini. Regular bus service runs connect Rimini and San Marino.

A written constitution adopted by San Marino in 1600 remains largely in force today. The constitutional structure of San Marino is unusually complex for so small a country. This fact reflects the longstanding desire of the San Marinese to preserve their liberties by dividing authority.

A ten-member administrative body called the Congress of State, or cabinet, exercises executive power. Two people, called captains regent (or chief executives), are chosen from opposing political parties to preside over the cabinet for six-month terms. The captains regent are elected by San Marino’s legislative body, the Great and General Council. The legislature’s 60 members are elected by proportional representation for five-year terms.

Judicial authority in both civil and criminal cases is vested largely in Italian judges. Local San Marinese justices of the peace only hear civil cases involving small sums of money. Appeals go first to an Italian judge. Final court review of cases is handled by an administrative tribunal in San Marino.

San Marino joined the Council of Europe in 1988 and became a full member of the United Nations (UN) in 1992.

Tradition has it that in AD 301 a Christian stonecutter named Marinus from the island of Rab, off the coast of Dalmatia, came to the city of Rimini. Marinus soon took refuge on nearby Mount Titano, where he gathered a small group of Christians seeking escape from religious persecution. With the passage of time, Marinus was venerated as Saint Marinus (or San Marino in Italian), and his community developed the institutions of a small state. At first, San Marino’s economic insignificance and isolated location was a source of safety from invasion. Later, however, it became the target of Hungarian, Saracen, and Norman attacks. As a result, fortifications were built on the peaks of Mount Titano.

During Italy’s struggle for unification, San Marino gave refuge to many famous exiles and fugitives—notably Giuseppe Garibaldi, his wife, and his aides—after the fall of the Roman Republic in 1849. In 1851 an Austro-Vatican force entered San Marino to arrest some former members of the Roman assembly. San Marino has had a treaty of cooperation and friendship with Italy since 1862. The necessity for friendly relations with Italy has generally made it impractical for San Marinese policies to deviate significantly from Italian interests.