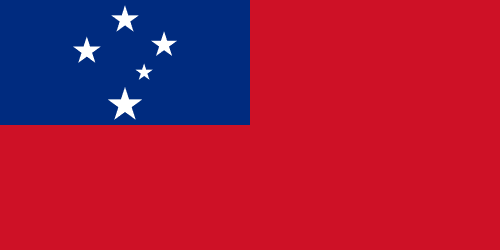 Samoa, independent island nation in the southern Pacific Ocean, located about 2,900 km (about 1,800 mi) northeast of New Zealand. It occupies the large western portion of the 480-km (300-mi) long Samoan archipelago that is divided at longitude 171° west; the Samoan islands east of this line form the United States territory of American Samoa. Known for many years as Western Samoa, the country changed its official name to Samoa in 1997. From the end of World War II in 1945 to its independence in 1962, Western Samoa was a United Nations trust territory administered by New Zealand. Apia is the country’s capital, largest town, and commercial center.

LAND AND RESOURCES OF SAMOA

Samoa is made up of nine islands with a total land area of 2,842 sq km (1,097 sq mi). The two largest islands, Savai‘i (1,709 sq km/660 sq mi) and Upolu (1,114 sq km/430 sq mi), comprise more than 99 percent of the land. They are of volcanic origin and their mountainous interiors are covered with dense rain forests that contain valuable hardwood trees. The surrounding landscape consists of fertile plateaus and coastal plains with numerous rivers and streams. Samoa’s seven smaller islands are Apolima, Manono, Fanuatapu, Nu‘ulopa, Nu‘utele, Nu‘ulua, and Nu‘usafee, of which only Apolima and Manono are inhabited. Mount Silisili, on Savai‘i, is the country’s highest peak with an elevation of 1,858 m (6,096 ft).

The climate is tropical with high temperatures and humidity. Apia, which lies on the northern coast of Upolu, has an average daily temperature range of 21° to 31°C (70° to 88°F), with little seasonal variation, and an average annual precipitation of 2,850 mm (112 in). Most rainfall occurs on the windward southern sides of the islands, however, where the annual precipitation can range from 5,080 mm (200 in) to 7,110 mm (280 in). The heaviest rainfall occurs between the months of November and April, and cyclones, which are relatively frequent, are most likely to occur during these same months.

A large percentage of the country’s plants and birds are not found elsewhere. Deforestation is reducing wildlife habitats and leading to soil erosion. Both Savai‘i and Upolu are almost entirely surrounded by coral reefs, as are several smaller islands. The reefs are threatened by the dumping of raw sewage and increased sedimentation from soil erosion and coastal developments. Lagoons near Apia are polluted with raw sewage, and water is in increasingly short supply in some areas.

THE PEOPLE OF SAMOA

The population of Samoa is 219,998 (2009 estimate), giving the country an overall population density of 75 persons per sq km (194 per sq mi). The population is unevenly distributed, however, and about two-thirds of the people live on Upolu, primarily in oceanside villages of less than 500 people. Apia, with a population of 40,000 at the 2003 census, is the only urban area. More than 90 percent of the population are Samoans, a Polynesian people. Only about 7 percent of the population consists of other Pacific Islanders, Europeans, and Chinese. English and Samoan are the official languages, although Samoan is preferred. English is normally only used in business and government.

More than 99 percent of Samoans are Christians, with about 60 percent of the people belonging to Protestant denominations, primarily the Congregational Christian and Methodist churches. Roman Catholics make up the next largest Christian group. Education, which is provided by the government and church-sponsored schools, is not free but it is compulsory between the ages of 5 and 12. Primary school attendance is nearly universal, while 76 percent of secondary school-aged children are enrolled. Samoa’s adult literacy rate is 99 percent. The National University of Samoa (founded in 1988) and the University of the South Pacific School of Agriculture (1977) are in Apia.

With the exception of housing in Apia where there are some Western-style houses, most homes are oval-shaped open-sided structures on raised platforms; they are often made from a mixture of traditional and imported building materials. Rural dwellers are largely self-sufficient, relying on subsistence crops and marine fish for food. Western-style dress is common in Apia, but more traditional clothing prevails in rural areas. This includes the lava lava (wraparound skirt) for men and the puletasi (long dress) for women. Religion dominates much of Samoan life. Almost everyone wears white clothing on Sundays in observance of the Christian day of rest. Many villages have a 10- to 20-minute evening prayer curfew and churches organize recreational and social opportunities for their members. People are conservative and take pride in maintaining fa‘a Samoa (the Samoan way of life). These traditions include preserving the role of the matai, a leader chosen to head an aiga (extended family of generally 20 to 30 members). The matai, who is usually a man, directs the extended family’s economic, social, and political affairs.

Competitive sports such as rugby and cricket are popular. Annual festivals include the celebration of the palolo, a type of coral worm that surfaces briefly during the year at times corresponding to the phase of the moon, usually in October and November. Palolos are a Samoan delicacy.

The United Nations (UN) classifies Samoa as one of the world’s least developed nations. It is dependent on agriculture and fishing, which is mainly at a subsistence level, although some products are exported or sold in local markets. Overfishing has led to a drop in fish harvests, and the use of illegal poisons by some fishers is having devastating effects on marine life. Crop damage from cyclones and disease has also had disastrous effects, but attempts to diversify the economy are expected to lessen the country’s reliance on subsistence agriculture. Underemployment is high and remittances from Samoans living abroad, mainly in New Zealand, remain important but are declining.

The principal agricultural export products are coconuts and cocoa. In 1993 a fungal disease struck the taro crop that had been the country’s primary food export. Production dropped 97 percent, causing shortages at home and reducing exports. The government instituted an emergency pesticide program to contain the disease, but the fungus continued to be a problem. Pigs and chickens are raised, but fish are more important for local consumption. Lumbering and light industries are expanding, including the opening in 1991 of a garment factory owned by a United States company. Also in 1991, a Japanese company opened an automobile component plant and it is now the largest export industry and private-sector employer. Energy is derived from imported diesel fuel and a hydroelectric facility located at Sauniautu. Tourism is a developing and important industry and in 2007 Samoa had 122,000 visitors, primarily from New Zealand and American Samoa.

Samoa has a chronic trade deficit. New Zealand and Australia are the country’s main trading partners and they are also the chief sources of financial aid. The unit of currency is the tala which is divided into 100 sene (2.60 talas equal U.S.$1; 2007 average). In 1994 budget figures showed $95.3 million in revenues and $76.7 million in expenditures. The gross domestic product, which measures the total value of all goods and services produced in the country, was $524.6 million in 2007.

The road system of Samoa extends for 2,337 km (1,452 mi). Apia is the principal port; other ports are at Asau, Mulifanua, and Salelologa. Faleolo Aerodrome, located about 30 km (about 20 mi) from Apia, is the international airport. The national airline, Polynesian Airlines, operates at a loss and is a drain on the economy. Daily barges shuttle between Upolu and Savai‘i and both islands also have a domestic airfield.

Samoa is governed under a 1962 constitution. The country has an elected legislative assembly, called the Fono, that consists of 47 matai and two members representing the non-Samoan community. All citizens aged 21 and over are eligible to vote. The head of state, largely a ceremonial title, is currently a member of one of Samoa’s paramount chiefly families. He holds this title for life, but when he dies the legislative assembly will elect the head of state to a five-year term. Actual executive power is vested in the head of government, a prime minister who is selected by the Fono from among its members. The judiciary is independent of both executive and legislative branches and includes the Supreme Court and lower courts. The chief justice is appointed by the head of state.

Samoa became a full member of the Commonwealth of Nations in 1970. The country joined the UN in 1976 and has since become a member of several of the organizations affiliated with it, including the World Health Organization (WHO) and the International Monetary Fund (IMF). Samoa is also a member of the South Pacific Forum, a regional organization that addresses the foreign affairs and international trade of its member countries.

The Samoan Islands were probably settled from Fiji about 3,500 years ago. Settlers from Samoa may then have migrated to other islands of Polynesia, including Hawaii, Tahiti, and New Zealand. The first European to explore the islands was the Dutch navigator Jacob Roggeveen in 1722. However, little was known of Samoa until after the arrival of the London Missionary Society in 1830. Toward the end of the 19th century, Germany, Britain, and the United States competed for influence in Samoa. In 1899 treaties among the three powers resulted in Germany annexing Western Samoa (now called Samoa), the eastern part of the archipelago becoming American Samoa, and Britain withdrawing its claim to the islands.

The German era was marked by commercial development, but it was brief. At the outbreak of World War I in 1914, New Zealand occupied Western Samoa; after the war the League of Nations gave New Zealand a mandate to administer the islands. Although Western Samoa’s request for self-government was denied, the people never accepted foreign rule. The mau, a passive-resistance movement that had begun under the German occupation, gained strength under New Zealand colonial rule. In a tragic incident in 1929, New Zealand authorities shot and killed 11 mau adherents.

American soldiers were stationed in Western Samoa during World War II (1939-1945), but no battles were fought there. After the war, Western Samoa became a trust territory of the UN and New Zealand continued as the administering authority. In 1962 Western Samoa became the first nation in the Pacific Islands to become an independent state, excluding New Zealand. A Treaty of Friendship signed with New Zealand in the same year guarantees a high degree of cooperation and association, but New Zealand has no special responsibilities for the islands’ affairs. Western Samoa changed its name to Samoa in 1997.