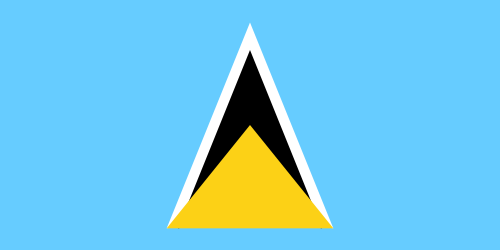 Saint Lucia, independent island state in the southeastern Caribbean Sea. Magnificent mountain scenery, secluded beaches, and a tropical climate draw thousands of visitors to the island each year. Fruit farming flourishes in many rural parts of the island; bananas account for much of the nation’s export earnings.

Saint Lucia is one of the Windward Islands of the West Indies. It lies between Martinique on the north and Saint Vincent on the south. It has an area of 616 sq km (238 sq mi).

The island of Saint Lucia is of volcanic origin. A forested mountain range traverses the island from north to south. The highest peak in the range is Mount Gimie (950 m/ 3,117 ft). In the south, Soufrière, a volcanic crater with hot sulfur springs, is a popular tourist destination. The Pitons, a pair of sharp peaks that rise dramatically from the ocean on the southwest coast, exemplify Saint Lucia’s picturesque beauty. The island’s mountains contain many streams and fertile valleys.

Saint Lucia has a tropical climate, with an average annual temperature of 26°C (79°F). The average annual rainfall ranges from about 1,500 mm (about 60 in) on the coast to more than 2,500 mm (more than 100 in) in the mountains. The rainy season lasts from May to August.

Rainforest originally covered almost the entire island. There has been a significant reduction in the amount of forest and wooded land. The main environmental issue is the building of tourist developments in ecologically sensitive areas. Soil erosion is a problem, especially in the north. Saint Lucia has made efforts to safeguard its natural habitats, however. Much of the remaining forest is protected, either for water supplies or for wildlife.

Most of the population of Saint Lucia is black, and about 90 percent is Roman Catholic. English is the official language, but a French patois is widely spoken. The total population of the country (2009 estimate) is 160,267. The capital and largest city is Castries (population, 2003 estimate, 14,000); it is also the principal port and has an excellent harbor.

Saint Lucia’s economy is based largely on tourism and agriculture. Tourism has been steadily expanding in Saint Lucia since the late 1960s. The island has a good network of roads linking all towns and villages. Two airports also serve the island.

Bananas are the most important crop and principal export; other products include coconuts and mangoes. About 37,800 metric tons of fruit were harvested in 2007. Manufacturing on the island is limited; the chief products include cardboard boxes, electric parts, clothing, plastics, and beverages.

The gross domestic product, which measures the total value of goods and services produced in the country, was $980 million in 2007. The national currency is the East Caribbean dollar (2.70 E.C. dollars equal U.S.$1; 2007).

Saint Lucia is a parliamentary democracy. It recognizes the British king or queen as its own monarch and head of state. The monarch is represented by a governor-general. However, a cabinet headed by the prime minister wields actual executive power. The nation’s parliament holds legislative power. The 17 members of its lower house, the House of Assembly, are elected by popular vote; the 11 members of the Senate are appointed by the governor-general on the advice of the prime minister, the leader of the opposition party in parliament, and others. Saint Lucia is a member of the Commonwealth of Nations.

Saint Lucia was one of the last strongholds of the Carib people indigenous to many of the Caribbean islands. Saint Lucia was probably first visited by Europeans about 1500, but the first successful colony was not established until the mid-17th century. The French signed a treaty with the Carib in 1660.

Saint Lucia was the scene of an extended struggle for possession between the French and the British. The French claim was based on a reputed grant of the island in 1635 by Cardinal Richelieu to officers of the French West India Company. The British claimed a grant by Charles I dating from 1627. The island changed hands between England and France 14 times, but until the 19th century its settlement and administration were most often in French hands. Saint Lucia was finally ceded to the British in 1814 by the Treaty of Paris.

From the mid-17th century on, African slaves were brought to work on the island’s plantations. They and their descendants gradually came to dominate the population.

On February 22, 1979, Saint Lucia became an independent state within the Commonwealth of Nations. In 1992 the poet Derek Walcott, a native of Castries, won the Nobel Prize for literature. In June 1997 the Labour Party won 16 of 17 seats in the parliament, defeating the United Workers Party, which had controlled the government since 1982. Labour leader Kenneth Anthony became the new prime minister.