INTRODUCTION OF SAINT KITTS AND NEVIS 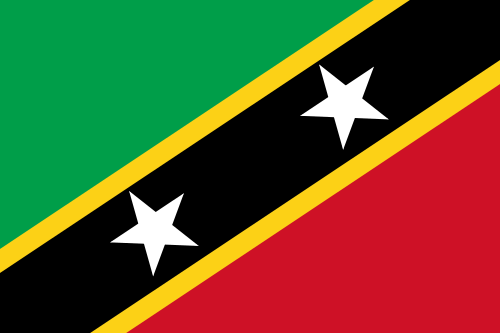 Saint Kitts and Nevis is the smallest country in the Western Hemisphere in area and in population. The country covers an area of 269 sq km (104 sq mi). It has a population of 40,131 (2009 estimate). The majority of the people live on the island of Saint Kitts. Nearly all of the country’s people are blacks of African ancestry. The Africans were originally brought to the islands to work on sugar plantations.

Today, tourism is a leading industry on the islands. Lush green rain forests, unusual plants and animals, and sandy beaches draw tourists to Saint Kitts and Nevis. Cruise ships also make stopovers in the harbor at Basseterre. However, the islands lie in the Caribbean hurricane zone, and hurricanes present a danger from August to October.

LAND OF SAINT KITTS AND NEVIS

Both Saint Kitts and Nevis were formed by volcanoes. Three groups of rugged volcanic peaks, divided by deep ravines, dominate the topography of Saint Kitts. In the center of the island, Mount Liamuiga, a dormant volcano, rises to a height of 1,156 m (3,793 ft). It is the country’s highest point. Liamuiga (“fertile land”) is the Carib Indian name for the peak, which was formerly called Mount Misery. In the southeast, a low-lying peninsula with rolling hills, salt ponds, and golden beaches stretches toward the island of Nevis.

Nevis lies across a narrow channel 3 km (2 mi) to the southeast of Saint Kitts. The Caribs called the island Oualie (“land of beautiful water”). Nevis is nearly circular in shape and surrounded by coral reefs and beaches of white coral sand. Its highest point, Nevis Peak (985 m/3,232 ft) at the center of the island, is usually shrouded in mist. Christopher Columbus named the island after the Spanish word for snow, nieve, in the mistaken belief that the mist atop the volcanic peak was snow. He named Saint Kitts after his patron saint, Christopher. Saint Kitts accounts for 176 sq km (68 sq mi) of the country’s total area, and Nevis for 93 sq km (36 sq mi).

Climate in Saint Kitts and Nevis

Saint Kitts and Nevis has a tropical climate moderated by northeasterly trade winds. The average annual temperature is 27°C (80°F). Near sea level the annual rainfall is about 1,250 to 2,000 mm (50 to 80 in) a year, with a wetter season from July to November. Rainfall increases with altitude and on the windward slopes of the mountains. There is a risk of hurricanes from August to October. Although serious storms are relatively rare, Hurricane Luis caused extensive damage to sugar crops and buildings in 1995.

Plants and Animals in Saint Kitts and Nevis

Although both Saint Kitts and Nevis are heavily cultivated, they have between them a wide variety of habitats, including oceanic rain forest and cloud forest, dry woodland, wetland, grassland, and salt ponds. The rain forest on the slopes of the volcanic peaks on Saint Kitts and the cloud forest on Nevis Peak are home to wild orchids, candlewoods, tree ferns, and tropical vines. The brilliant red blossoms of the flamboyant tree, or flame tree, are the national flower of Saint Kitts and Nevis. Trees include several varieties of royal palm; the mahoe; the spiny-trunked sandbox tree; the silk-cotton tree, or ceiba tree; the turpentine tree, a member of the pistachio genus; and numerous species of tropical fruit trees such as papaya, mango, and breadfruit. Nevis is known for its many coconut palms, which fringe the coast.

Green vervet monkeys, introduced by the French in the 17th century, live in the forests of both islands. The mongoose, another imported animal, has contributed to the extinction of indigenous species of lizards, iguanas, and tortoises, as well as birds that nest on the ground. The anole is the most common of the many lizards, and there are also many species of frogs, bats, and butterflies. Saint Kitts and Nevis has the earliest documented evidence of honey bees in the Caribbean. Three species of hummingbird and many sea birds, such as frigate birds and brown pelicans, are found on the islands.

Fishing is taking its toll on the coral reefs of Saint Kitts and Nevis. There has been some loss of forests and woodlands in the past two decades, leading to soil erosion. Some pollution of the coastline has occurred as a result of oil spills from nearby tanker lanes.

PEOPLE OF SAINT KITTS AND NEVIS

The people of Saint Kitts and Nevis are primarily descendants of west Africans brought to the islands as slaves. The population is 95 percent black. Descendants of Europeans and east Asians constitute small minorities. About 80 percent of the population lives on Saint Kitts. The population is 68 percent rural, and most of the urban population lives in Basseterre (population, 2003 estimate, 13,000), the country’s capital and the chief port on Saint Kitts. Charlestown (population, 1991, 1,411) is the chief port on Nevis and the birthplace of 18th-century statesman Alexander Hamilton.

English is the official language of Saint Kitts and Nevis, but an English-based Creole is the first language of nearly all the people and is the language used most in everyday interactions.

About 80 percent of the people belong to Protestant denominations, mostly Anglican or Methodist. Other communities on Saint Kitts and Nevis include Baptists, Seventh-Day Adventists, Moravians, and Plymouth Brethren. About 10 percent of the population is Roman Catholic. Historically there was also an important Jewish community on Nevis; in the 17th and 18th centuries about one quarter of the island’s population were Sephardic Jews (Sephardim), who migrated there after being expelled from Brazil, bringing the latest sugar technology with them.

The islands have a long tradition of education, which is compulsory between the ages of 5 and 17. Adult literacy rates are among the highest in the Western Hemisphere, averaging above 97 percent (1995) for both islands. University-level education is provided by a branch of the University of the West Indies.

ECONOMY OF SAINT KITTS AND NEVIS

Saint Kitts and Nevis has a gross domestic product (GDP) of around US$527 million (2007), equivalent to $10,794.60 per capita. Agriculture and tourism are the principal sectors of economic activity. However, agriculture, especially the production of sugarcane, is declining in importance, while tourism is rapidly growing. Although sugarcane remains the leading crop, output has been hit by the effects of low world prices, hurricane damage, droughts, and low wages. Other crops include coconuts, peanuts, sweet potatoes, yams, sweet peppers (see Capsicum), bananas, rice, and coffee.

The government is encouraging ecotourism, travel based on respect for natural beauty and wildlife. Nature trails lead into the rain forests and onto the mountains, and snorkeling and scuba diving are popular along the coasts. Tourism is the single most important foreign-exchange earner on the islands, bringing in more than $106 million annually.

A small manufacturing sector also contributes to the economy of Saint Kitts and Nevis. Sugar refining has been the leading industry, but has declined in importance in recent years. Other industries include brewing, garment assembly, and the assembly of electronic parts for export.

GOVERNMENT OF SAINT KITTS AND NEVIS

Under the 1983 constitution, the Federation of Saint Kitts and Nevis recognizes the British monarch as its own monarch and head of state. The monarch is represented in the islands by a governor-general. The head of government is the prime minister, who must command a majority of the single-chamber legislature, the National Assembly.

The National Assembly has 15 members, 11 of whom are elected by popular vote for terms of up to five years. Three members represent Nevis constituencies, and eight represent Saint Kitts. Of the four nonelected members, one is the speaker of the Assembly and the other three, known as senators, are appointed—two on the advice of the prime minister and one on the advice of the leader of the opposition. Nevis also has its own assembly and the right to secede from Saint Kitts.

HISTORY OF SAINT KITTS AND NEVIS

Christopher Columbus landed on the islands in 1493, on his second voyage to the Americas, and named Saint Kitts for his patron saint, Saint Christopher. At that time Carib Indians were living on both islands. They defended their territory against potential French and British settlers but were eventually slaughtered or died of diseases introduced by the Europeans. In 1623 Saint Kitts became the first British territory in the West Indies; Nevis was colonized in 1628. In 1690 the islands were struck by a devastating earthquake and tidal wave (see tsunami), which destroyed Nevis’s first capital, Jamestown.

The French also claimed Saint Kitts and settled Basseterre. For a while the French and British shared Saint Kitts, but by the middle of the 17th century intermittent warfare between the two had become the norm. The French drove the British from Saint Kitts in 1664, only to be driven out themselves in 1689. French forces regained the island briefly in the early 18th century, and again in 1782 following a month-long siege of the British garrison in the Brimstone Hill fortress. This massive stronghold on the northwestern coast was once known as the Gibraltar of the West Indies because of its commanding strategic position. Nevis also came under periodic attack from France and Spain. France finally ceded Saint Kitts to Great Britain by the Treaty of Paris in 1783.

The islands’ first commercial crop was tobacco, but later plantation owners found that the fertile soils produced high-quality sugarcane. The sugar plantations were worked by large numbers of slaves imported from Africa. After the British government abolished slavery during the 1830s, the economy of the islands went into decline.

From 1816 until 1871 Saint Kitts, Nevis, Anguilla, and the islands of what are now the British Virgin Islands were administered as a single colony. In 1871 the Leeward Islands Federation united Saint Kitts, Nevis, and Anguilla as a British dependency. The three islands became an internally self-governing member of the West Indies Associated States in 1967. Anguilla was placed under direct British rule in 1971 and was officially withdrawn from the dependency in 1980.

Saint Kitts and Nevis jointly attained full independence within the Commonwealth of Nations on September 19, 1983. Kennedy Simmonds, leader of the People’s Action Movement (PAM), became the nation’s first prime minister and held that position for more than ten years. The PAM remained in power until a scandal involving allegations of drug smuggling on Saint Kitts rocked Simmonds’s government. An election was called in 1995, which the Labour Party won, and Labour leader Denzil Douglas became the nation’s new prime minister. His government moved to crack down on drug trafficking and the crime associated with it. It also encouraged the development of tourism and of manufacturing for export.

In 1997 lawmakers in Nevis authorized a referendum on the issue of whether Nevis should pursue independence from Saint Kitts. Pro-independence leaders claimed that the government in Saint Kitts had ignored the needs of residents on the smaller island of Nevis. Saint Kitts had an infrastructure that included paved roads, a state-of-the-art hospital, and a modern port and international airport that cater to tourists. Nevis had a single dirt road and a small, aging port. Pro-independence supporters also cited cultural differences that had developed between the two islands, expressing particular alarm at the perceived growth in drug smuggling and crime on Saint Kitts. The referendum, however, failed to gain the necessary two-thirds majority for ratification by the National Assembly.

In the 2000 legislative elections, the Labour Party won a majority of the elected seats in the legislature, and the party’s leader, Denzil Douglas, began a second term as prime minister. His third consecutive term began in 2004. Although tourism increased while Douglas was in office, drug trafficking and high crime rates remained a problem.