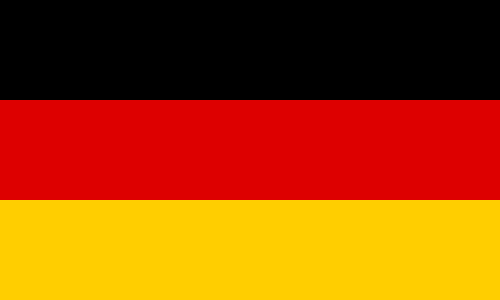 West Germany, common name of a former republic of central Europe, bordered on the north by the North Sea, Denmark, and the Baltic Sea; on the east by the former East Germany and the Czech Republic; on the south by Austria and Switzerland; and on the west by France, Luxembourg, Belgium, and the Netherlands. West Germany had an area of 248,577 sq km (95,976 sq mi). It was established officially as the Federal Republic of Germany (FRG; German Bundesrepublik Deutschland) on September 21, 1949, as one of two successor states—East Germany (officially the German Democratic Republic, or GDR) being the other—to the nation of Germany after its defeat in World War II (1939-1945). West Germany ceased to exist in 1990 when it merged with East Germany into a single nation known as Germany (officially called the Federal Republic of Germany).

When World War II ended in 1945, leaders from the United States, Britain, and the Union of Soviet Socialist Republics (USSR) met at the Potsdam Conference. They decided to temporarily divide Germany into four occupation zones—French in the southwest, British in the northwest, American in the south, and Soviet in the east. The city of Berlin, located inside the Soviet zone, was also divided among the four powers. When the USSR began to establish Communist governments in Eastern Europe, the Allied alliance suffered a breakdown. With western powers opposed to Soviet expansion, the Cold War began and tensions in Germany increased. The Soviets increased the isolation of the zones of Germany and Berlin under their control, distancing these zones from the democratic development being encouraged by the Western powers in the rest of Germany. Unable to agree with the Western powers on a policy for Germany, the Soviets set up a Communist government in the eastern part of Germany (East Germany). The United States, France, and Britain supported the free market democracy in the west (West Germany).

West Germany included the states of Baden-Württemberg, Bavaria, Bremen, Hamburg, Hessen, Lower Saxony (Niedersachsen), North Rhine-Westphalia (Nordrhein-Westfalen), Rhineland-Palatinate, Saarland, and Schleswig-Holstein. Bonn, an old university city on the Rhine River, served as the West German capital and continues to host much of the government of the new Germany. The official capital of Germany, Berlin (formerly the capital of East Germany), is scheduled to take over some of the federal government functions by the year 2000. At the time of reunification in 1990 West Germany had about 62 million inhabitants.

THE ADENAUER YEARS OF WEST GERMANY

From 1949 to 1963 the government of West Germany was dominated by the Christian Democratic Union. Its leader, Konrad Adenauer, was elected the republic’s chancellor in 1949. As West Germany’s first leader, Adenauer sought to transform the country from a postwar occupied zone to an independent nation accepted as an equal by other countries. The goal of independence became more attainable after the United States, Britain, and France recognized that Western Europe could not withstand Soviet pressure without the aid of a strong West Germany. Accordingly, military occupation of West Germany was ended with the Bonn Convention of 1952.

In 1955 West Germany was internationally recognized as an independent nation. Allowed to rearm, it joined the North Atlantic Treaty Organization (NATO), which had been established in 1949 for the defense of Europe. West Germany also cooperated with the European Coal and Steel Community, the European Atomic Energy Community, and the Council of Europe (see European Union). As partial reparation for war crimes and out of gratitude for postwar aid from the United States, West Germany assumed aid obligations to Israel and developing nations. Although not a member of the United Nations (UN) until 1973, the republic joined many UN agencies and made large contributions to UN projects. In 1963, in a move to reverse long-standing hostility between the French and Germans, Adenauer and French President Charles de Gaulle agreed to hold regular conferences between the two nations. West Germany also improved relations with Eastern European countries. With reunification as his goal, Adenauer encouraged trade with East Germany but steadfastly refused to recognize it as a sovereign state.

In domestic affairs Adenauer and Ludwig Erhard, his economics minister, encouraged economic recovery through free enterprise aimed at the consumer market both at home and abroad. Industrial growth was aided by tax laws favoring business-owners, by heavy private investment, and by hardworking, relatively undemanding laborers. The workforce was augmented first by a large influx of highly skilled immigrants, who were among the more than 11 million refugees from East Germany and former German areas of Europe. Later, so-called guest workers (German Gastarbeiter) came from Italy, Spain, and Turkey. The result was the period of rapid industrial expansion and prosperity known as the Wirtschaftswunder (German for “economic miracle”). Funded by its growing industrial wealth, the government built an army and expanded the social welfare system.

When Adenauer retired in 1963 at the age of 87, he was succeeded as chancellor by Erhard (1963-1966) and Kurt Georg Kiesinger (1966-1969), fellow Christian Democrats who headed coalition governments. In 1969 a Social Democratic victory brought Willy Brandt, former mayor of West Berlin, to the chancellorship. With the approval of big business, he initiated the Ostpolitik (German for “eastern policy”) to improve political and trade relations with the Soviet bloc. In 1970 he signed nonaggression treaties with the USSR and Poland that confirmed existing boundaries. Reversing Adenauer’s policy on East Germany, he reached an accord with East Germany in 1972 that facilitated West German access to West Berlin. In 1973 the two countries granted each other full diplomatic recognition and were admitted to the United Nations. The following year, Brandt resigned when it was discovered that a member of his personal staff was an East German spy. He was succeeded by Helmut Schmidt.

Schmidt faced domestic problems that had been simmering since the late 1960s. The economy suffered under rising unemployment and rapid inflation, exacerbated by the presence of 4 million guest workers and their families. The country was also troubled by student unrest and by a wave of bombings, kidnappings, and murders by such terrorists as the Baader-Meinhof group. In foreign affairs Schmidt applied Brandt’s Ostpolitik to relations with East Germany. Schmidt’s Social Democratic-Free Democratic coalition government won the elections in 1976 and 1980, but in 1982 the Free Democratic party ended the Schmidt coalition government by withdrawing and forming a new coalition headed by Helmut Kohl of the Christian Democrats.

In the 1980s West Germany emerged as a leading economic power, along with Japan and the United States. West German leadership in the international arena became more prominent in the late 1980s. West Germany supported both the federation of Western Europe in the European Community (now called the European Union) and the birth of new democracies in Eastern Europe. Kohl’s political coalition was confirmed in elections in 1983 and 1987. The two German republics achieved better relations with new financial and travel accords in 1984, and East German President Erich Honecker paid his first official visit to West Germany in 1987.

With the reform of Soviet society and economy introduced by Soviet leader Mikhail Gorbachev in the late 1980s, the Soviet-backed regimes of Eastern Europe began to lose control over their people. East Germany’s Communist government fell in 1989, an event that profoundly altered relations between the two German republics. With the fall of the Berlin Wall and other emigration barriers, more than 200,000 East Germans streamed into West Germany. The West German government not only aided the new immigrants but also allocated a massive infusion of capital to shore up the ailing East German economy. West Germany and East Germany merged their financial systems in July 1990, and in October the German Democratic Republic (East Germany) dissolved and became part of the Federal Republic of Germany. The Christian Democratic coalition, led by Kohl, scored a decisive victory in elections for the new German government in December 1990, and Kohl became the chancellor of the unified Germany. The newly elected Bundestag (the legislative body of the German parliament), representing both East and West, named Berlin the capital of Germany on June 20, 1991. The transfer of administration from Bonn, the capital of the former West Germany, was expected to take several years.

Although the economy thrived in what was formerly West Germany, unemployment and failing businesses plagued what was formerly East Germany. To fund investment and welfare programs in the East, the government raised taxes, generating opposition among citizens of the West who resented having to support the East Germans. The influx of more than 200,000 ethnic Germans from East European countries seeking asylum in Germany also strained the economy. By 1992 the unemployment rate returned to almost normal in the western states, but remained above 15 percent in the eastern states.