INTRODUCTION OF REPUBLIC OF PALAU 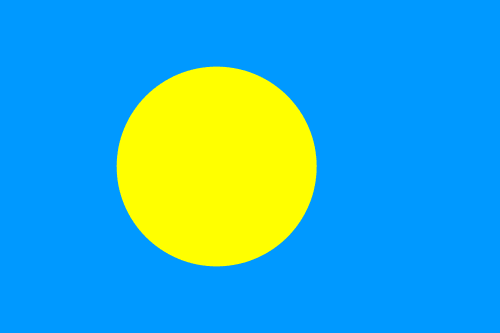 Republic of Palau, independent republic in the western Pacific Ocean, part of the island group of Micronesia. An archipelago of about 200 islands, Palau is situated near the equator about 850 km (about 500 mi) east of the Philippines. After World War II (1939-1945), it became part of the United Nations Trust Territory of the Pacific Islands and was administered by the United States. Palau became a self-governing nation in October 1994, when it entered into a Compact of Free Association with the United States. Koror, which covers the island of the same name, is the country’s largest town and the provisional capital. A new capital is being built on the island of Babelthuap.

LAND AND RESOURCES OF REPUBLIC OF PALAU

The islands that make up Palau are encompassed by a fringing reef. The country has a land area of 488 sq km (188 sq mi). It extends more than 160 km (more than 100 mi) in a north-south direction and about 30 km (about 20 mi) from east to west. Nine of the larger islands are populated. Babelthuap, with an area of more than 337 sq km (more than 130 sq mi), is the largest. It is connected by bridge to Koror. In addition to Babelthuap and Koror, Palau’s populated islands include Angaur, Kayangel, and Peleliu.

The larger islands are volcanic and have rich soils and ample water. The southernmost islands are small uplifted coral structures. Palau’s climate is tropical and humid. The average high temperature is 27.5° C (81.5° F), with little seasonal variation. Annual rainfall is about 3,800 mm (about 150 in). Fish and other marine life are abundant, but there are few land animals.

POPULATION OF REPUBLIC OF PALAU

The population of Palau (2008 estimate) is 21,093. About 70 percent of the people live on the island of Koror. With an area of 21 sq km (8 sq mi), Koror has a population density equal to that of many cities. The remaining population is scattered among the other eight inhabited islands, where people live in small rural villages. The majority of people speak Palauan, a Micronesian language (see Austronesian Languages). English is an official language and most Palauans speak it fluently. Housing and clothing are largely Western in style. Most food is imported, and canned beverages are popular. Automobiles, outboard motors, and a wide variety of consumer goods are also imported, mainly from Japan.

Most Palauans are Christian, with 40 percent of the population belonging to the Roman Catholic church and 25 percent belonging to various Protestant religions. Modekngei, an indigenous non-Christian faith, is also represented. Education is free and compulsory between the ages of 6 and 14. Palau has one public high school and a number of church-affiliated private high schools. There are no colleges or universities; however, two-year training programs are available from the Micronesian Occupational College (1969) based in Palau.

Sports are popular, especially baseball, and churches sponsor many social events. Koror has restaurants, bars, and nightclubs. Among the local arts and crafts, story boards (wood carvings that depict Palauan legends) are unique to Palau.

There are many historical sites dating from the Japanese occupation of the islands (1914-1944), including the remains of Shinto shrines. The Botanical Gardens and the Palau National Museum are located on Koror.

ECONOMY OF REPUBLIC OF PALAU

Since World War II, Palau has been financially dependent on the United States. In 1994, U.S. assistance exceeded $35 million and Japan provided another $10 million. Under its Compact of Free Association with Palau, the United States will give the country about $500 million by the year 2010.

Subsistence agriculture and fishing are important economic activities. Tourism has also become increasingly important and, despite a generally poor infrastructure, there is growing interest among Asian investors, particularly from Japan and Taiwan. Fishing and tourism ventures are largely foreign-owned. Exports include seafood, copra, and handicrafts. Palauans rely heavily on imported goods, trading mostly with Japan and the United States. The basic unit of currency is the United States dollar.

The government of Palau employs about half of the nation’s 6,000 salaried workers. Most Filipino workers are employed in low-paying jobs in construction, tourism, and domestic service. Some tension exists between local residents and foreign workers. Some Palauans claim that foreign workers keep the minimum wage too low to live comfortably in an economy dependent on imported goods.

Cargo ships visit Palau frequently, particularly from Japan and the United States. Palau has three airports. The largest, Palau International Airport, is on Babelthuap near Koror. Palau Paradise Air, based in Babelthuap, is the sole domestic carrier; it offers flights to Peleliu and Angaur islands. There is also international air service several times weekly. In 1994 Palau had about 61 km (about 38 mi) of roads, but most were in poor condition. There is no public transportation.

GOVERNMENT OF REPUBLIC OF PALAU

Palau’s government is based on that of the United States. The president is elected for a maximum of two four-year terms. There is a vice-president and an eight member cabinet. The legislative branch, the Olbiil Era Kelulau (Palau National Congress), known as OEK, is bicameral. The upper house has 14 senators, and the lower house has 16 delegates. Elections are held every four years. Judges are appointed to life terms by the president with OEK approval. At the national level, two paramount chiefs have advisory authority. Palau has 16 states, each with its own governor.

HISTORY OF REPUBLIC OF PALAU

Palau was probably first settled by migrants from islands in Southeast Asia as early as 3,000 or 4,000 years ago. The Spanish became the first Europeans to visit Palau when they landed on the islands in 1710. In 1783 a British ship was wrecked off Palau and European diseases, to which the Palauans had no immunity, spread throughout the islands; consequently, the population, which was estimated at 50,000, fell to about 5,000. Germany purchased the islands from Spain in 1899 and became the first nation to establish effective foreign rule. In 1914 the islands were lost to Japan during World War I; Japan made the islands its headquarters for Micronesia, bringing large-scale economic development and urbanization to Koror. Palauans came to be outnumbered by Japanese settlers and workers from Korea. In 1944, during World War II, Palau was invaded by U.S. marines, and some of the bloodiest fighting of the war occurred there.

After the war, the United States replaced Japan in most of the islands of Micronesia. In 1947 Palau became part of the Trust Territory of the Pacific Islands established by the United Nations and administered by the United States. American rule was marked by increased dependency but little economic development. Democratic institutions and an American style of education were introduced.

In November 1993, Palauans voted to become a self-governing nation in free association with the United States. The new political status became effective on October 1, 1994. Palau manages its internal and external affairs, except for defense. The United States is responsible for defense and retains strategic rights to Palau. Under the Compact of Free Association, Palauans are allowed free entry to work and reside in the United States. On December 15, 1994, Palau became a member of the United Nations.