INTRODUCTION OF REPUBLIC OF THE CONGO 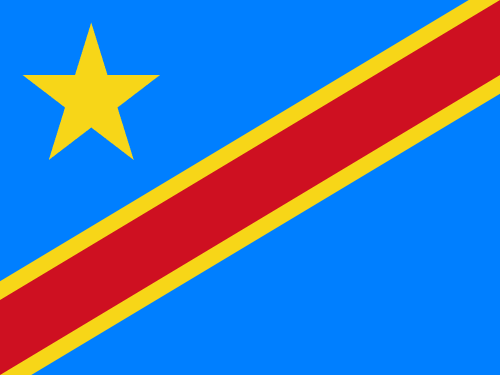 LAND AND RESOURCES OF REPUBLIC OF THE CONGO

Along the Atlantic coast is a low, treeless plain, which rises inland to the Mayumbe Mountains, an almost completely forested region with an average elevation of about 550 m (about 1,800 ft). In the south central region is the fertile valley of the Niari River. To the north lies the central highlands region, the Plateau Batéké. The plateau is cut by numerous tributaries of the Congo and Ubangi rivers. The Congo Basin occupies the northeastern part of the country. Dense tropical rain forests cover about 66 percent (2005) of the country’s total area and constitute a major natural resource. The principal commercial species are okoumé (a mahogany) and limba (a hardwood). Savanna vegetation is found in the northeast and the higher plateau areas. Wildlife is diverse and abundant, including antelope, giraffes, cheetahs, crocodiles, and numerous birds and snakes.

The climate is tropical, with mostly high heat and humidity. While the Mayumbe Mountains experience a long dry season, parts of the Congo Basin receive more than 2,500 mm (more than 100 in) of rainfall annually. Average temperatures in Brazzaville are 26°C (78°F) in January and 23°C (73°F) in July, with an annual rainfall of about 1,500 mm (about 60 in). Temperatures along the coast are slightly cooler.

Only 14.1 percent (2007) of the country enjoys protected status. Access to safe water has tripled in urban areas since 1980, but it remains very poor in rural areas. Air pollution from vehicle emissions is also a serious environmental problem.

POPULATION OF REPUBLIC OF THE CONGO

The population of the Congo comprises four major ethnic groups divided into about 75 smaller groups. The Kongo, the major ethnic group, accounting for about one-half of the total population, occupy the section southwest of Brazzaville. The M’Bochi live in the area where the savanna and forest meet in the northern region; the Sangha also inhabit the northern forest zone; and the Teke live in the central region. About 12,000 pygmies also live in the country.

Population Characteristics of Republic of the Congo

The population of the Congo (2009 estimate) is 4,012,809, giving the country an overall population density of 12 persons per sq km (31 per sq mi). About 79 percent of the population are Christians, primarily members of the Roman Catholic Church. Although French is the official language of the Congo, most people speak an African language.

Principal Cities of Republic of the Congo

The Congo’s most important cities are Brazzaville, the capital and major industrial center; and Pointe-Noire, the chief seaport.

Education in Republic of the Congo

Schooling is free and compulsory in the Congo for children of ages 6 to 16. In the 2007 school year primary school enrollment was 621,702 pupils, and 235,294 students attended secondary schools, including technical and teacher-training schools. The country’s only university, Université Marien-Ngouabi (1961), is in Brazzaville. It has a yearly enrollment of about 12,000 students. The estimated literacy rate in 2007 was 87 percent, one of the highest in Africa.

ECONOMY OF REPUBLIC OF THE CONGO

The Congolese economy is based primarily on subsistence agriculture and the exploitation of natural resources. Commercial activities are also important, primarily because the country provides key port and transport facilities for the Central African Republic, Chad, and Gabon. In 2003 the estimated national budget included $708 million in revenues and $1,103 million in expenditures.

Agriculture of Republic of the Congo

Cassava, pineapples, plantains, bananas, peanuts, maize, and avocados are the principal subsistence crops raised in the Congo. The main cash crops are sugarcane, palm kernels, cacao, and coffee. The most successful commercial agricultural operations are in the fertile Niari Valley.

Forestry and Mining in Republic of the Congo

Forest products account for a substantial share of the Congo’s exports. Petroleum is produced from offshore oil fields, and crude oil typically accounts for about three-quarters of the country’s yearly exports. The output of crude petroleum in 2002 was 88 million barrels and is expected to increase as a new offshore field is developed. In addition, natural gas, lead, copper, and gold are mined.

Manufacturing in Republic of the Congo

Industry is oriented mainly toward producing consumer goods. The largest industries process agricultural products (including tobacco) and forest products. Other manufactures include textiles, cement, footwear, and soap. A petroleum refinery began operation at Pointe-Noire in 1976.

Currency and Banking of Republic of the Congo

The unit of currency is the CFA franc, issued by the Bank of the States of Central Africa in Brazzaville (479.30 CFA francs equal U.S.$1; 2007 average). An exchange rate of 50 CFA francs equal to 1 French franc was in force from 1948 to 1994, when the CFA franc was devalued by 50 percent. The leading commercial banks are the Banque Internationale du Congo and the Union Congolaise de Banques.

Foreign Trade in Republic of the Congo

In 2007 imports cost $2,000 million and exports earned $6.95 billion. The Congo engages in considerable trade with the nearby countries of Cameroon, the Central African Republic, and Gabon, with which it is joined in the Customs and Economic Union of Central Africa. The country also has extensive commercial ties with France, the United States, and Italy.

Transportation and Communications in Republic of the Congo

Although broken by rapids, the Congo River and its tributaries provide a major and highly developed transportation network. The Congo-Ocean Railroad (510 km/317 mi) links Brazzaville to Pointe-Noire; a 286-km (178-mi) spur links the line to Moanda, Gabon. Only a small percentage of the 17,289 km (10,743 mi) of roads are paved. The road network is densest in the south. International airports serve Brazzaville and Pointe-Noire.

There are 6 daily newspapers published in the Congo. The government radio station broadcasts from Brazzaville, and a national television network began transmission in 1963. In 1997 there were an estimated 126 radio receivers and 13 television sets for every 1,000 people. There were 4 telephone mainlines per 1,000 people in 2004.

GOVERNMENT OF REPUBLIC OF THE CONGO

Under a 2002 constitution, the Congo is a democracy with a president as head of state. The president is popularly elected to a seven-year term. The president appoints a cabinet of ministers. Legislative power is vested in a 137-seat National Assembly and a 66-seat Senate.

HISTORY OF REPUBLIC OF THE CONGO

Some of the Bantu peoples in the Congo have been here since before AD 1000. When Diogo Cam, the first European explorer of the area, reached the Congo River in 1482, he found two large empires. The kingdom of Loango extended north and east from the river, and that of the Bakongo controlled the land near the mouth of the Congo River southward to the Cuanza River. Eventually, Portuguese imperialism and the slave trade destroyed the Bakongo’s empire and severely damaged that of the Loango. Pierre Savorgnan de Brazza of France explored the area in 1879 and 1880. He signed treaties with local rulers, placing the territory under French protection. The region became known as the Middle Congo, which in 1910 became one of the colonies federated into French Equatorial Africa. Brazzaville, the chief city of the Middle Congo, became the seat of government for the federation. After many attempts following World War II (1939-1945) to bind its African territories into a meaningful association, France began to grant them independence. The Middle Congo became an independent functioning republic in 1960 called Republic of the Congo.

Politics after independence were unstable; each disturbance made the government more radical. The first premier, Fulbert Youlou, outlawed all opposition but was overthrown in 1963. He was replaced by Alphonse Massamba-Débat and the National Revolutionary Movement; he secured good relations with Communist states throughout the world, especially the People’s Republic of China. In 1968 a coup organized by the army and more militant leftists overthrew Massamba-Débat and installed Marien Ngouabi as head of state. During the nine years of Ngouabi’s rule the Congo became even more of a Marxist country. In 1970, under a revolutionary constitution, the name of the nation was changed to People’s Republic of the Congo. Ngouabi was assassinated in 1977, and his place was assumed by General Joachim Yhombi-Opango. Despite its good relations with the Communist world, the Congo’s closest ties and much of its trade remained with France.

In 1979 Colonel Denis Sassou-Nguesso succeeded Yhombi-Opango as president; a treaty of cooperation and friendship was signed with the Union of Soviet Socialist Republics (USSR) in 1981. Reelected to the presidency in 1984 and 1989, Sassou-Nguesso faced rising opposition as the 1990s began. A national conference that was held in 1991 and 1992 changed the country’s name back to Republic of the Congo, introduced a new national flag and anthem, and approved a new constitution to make the Congo a multiparty democracy. Pascal Lissouba defeated Sassou-Nguesso in the presidential election of August 1992. Accusations of ethnic favoritism plagued Lissouba during the mid-1990s. Armed factions arose in opposition to his rule, with many Congolese rallying behind Sassou-Nguesso. In 1997 heavy fighting erupted in Brazzaville, destroying much of the city. In October of that year Sassou-Nguesso overthrew Lissouba with military assistance from Angola. Lissouba and his prime minister, Bernard Kolelas, fled the country. Factions loyal to the former leaders rose up to challenge Sassou-Nguesso, and the Congo descended into civil war. Some 10,000 Congolese died in the fighting, and hundreds of thousands were displaced.

Sassou-Nguesso oversaw the signing of a peace accord with the rival militias in 1999, offering an amnesty to participants in the civil war. The amnesty notably excluded Lissouba and Kolelas, who remained in exile. In 2000 and 2001 Lissouba and Kolelas were tried and convicted in absentia for treason and war crimes.

A new constitution was approved by public referendum in 2002. In presidential elections held in March, Sassou-Nguesso was elected to a seven-year term. Lissouba and Kolelas were prevented from running for president by a residency law, and international observers criticized the elections for their lack of competition. In parliamentary elections in 2007, Sassou-Nguesso’s Congolese Labor Party won 124 of the 137 seats in the National Assembly. The main opposition party, the Pan-African Union for Social Democracy headed by Lissouba, who was still in exile in London, England, won 10 seats. In July 2009, Sassou-Nguesso was reelected to a second seven-year term as president.