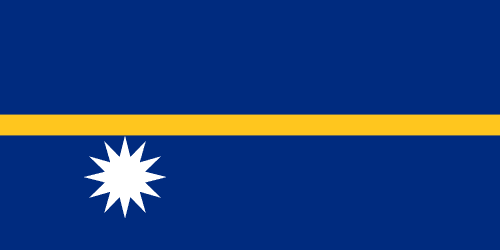 Nauru, also spelled Naoero, island and republic in the central Pacific Ocean, situated just south of the equator. It is a raised coral island, oval in shape, with an area of 21.2 sq km (8.2 sq mi). The population (2009 estimate) is 14,019. In the late 1980s the population was estimated to be made up of about 58 percent Nauruans, 26 percent other Pacific Islanders, 8 percent Chinese, and 8 percent Europeans. The Nauruans are of mixed Polynesian, Micronesian, and Melanesian origin. About four-fifths of the people are Christians. Nauruan and English are the main languages. Nauru does not have an official capital, but government offices are located in the district of Yaren.

Most of the people of Nauru live along a narrow, fertile coastal strip that encircles the island. The rest of the island consists of a central plateau, about 60 m (about 200 ft) in elevation, that contains rich deposits of high-quality phosphate rock. In the mid-1980s approximately 1.6 million metric tons of phosphate were exported annually to Australia, New Zealand, the Philippines, South Korea, and Japan, primarily for use in the manufacture of fertilizer. In the early 1990s demand and export of phosphate rock declined, and in 2007 production was down to 17,000 metric tons.

The Nauruans receive generous royalties for the mined phosphate, and this makes Nauru one of the richest, per capita, countries in the world. However, the phosphate mining has severely damaged the island’s environment. Eighty percent of the island has been rendered uninhabitable. Native birds are threatened by habitat loss, and Nauru is now seeking international aid in order to rehabilitate its land. Because of the expected depletion of the phosphate deposits, the Nauruan government is investing abroad and attempting to develop service industries to ensure the country’s economic future.

Nauru was visited by the British in 1798 and annexed by Germany in 1888; it surrendered to Australian armed forces in 1914. It was occupied by the Japanese during World War II from 1942 until 1945, and in 1947 was placed under United Nations trusteeship, administered jointly by Australia, New Zealand, and the United Kingdom. Nauru gained its independence and was proclaimed a republic on January 31, 1968. Its unicameral parliament has 18 popularly elected members who serve terms of up to three years. Voting is compulsory for all citizens age 20 and older. The president, elected by parliament from among its members, is assisted by an appointed cabinet. Hammer DeRoburt became president upon independence, serving from 1968 to 1976. He was returned to the presidency in 1978 and was reelected in 1980, 1983, and 1987. In late 1989, after a period of political turmoil, Bernard Dowiyogo was elected president; he was reelected in 1992. The campaign for the November 1995 legislative elections was marked by allegations that the government had poorly managed royalties from the phosphate mining. In late November the new parliament elected Lagumot Harris to replace Dowiyogo as president. Political instability returned in 1996 and 1997, when parliament elected four presidents in less than three months. A new parliament, elected in February 1997, chose Kinza Clodumar as president, Nauru’s fifth in less than a year. Nauru became a member of the United Nations in 1999.