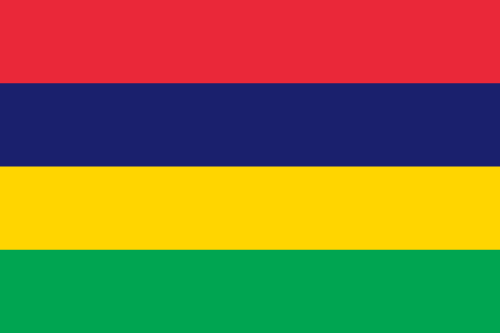 LAND AND RESOURCES OF MAURITIUS

The island of Mauritius is of volcanic origin. From a low-lying plain in the north, the terrain rises to a plateau that covers the central part of the island. The south is mostly mountainous, rising to a maximum elevation in Piton de la Petite Rivière Noire (828 m/2,717 ft). Several lakes are located in the plateau region, and numerous streams rise in the highlands and radiate to the coast. The island is almost entirely surrounded by coral reefs, but Port Louis, the capital, has a fine harbor, accessible to oceangoing ships. The climate is tropical and generally humid. The average annual temperature is 23°C (73°F) on the coast but is lower in the central plateau. Average annual precipitation ranges from about 1,000 mm (about 40 in) on the coast to about 5,000 mm (about 200 in) in the plateau region. Strong cyclonic storms occur often during the hot season (December to April). The main natural resource is the relatively fertile soil of the island.

The population of Mauritius (2009 estimate) is 1,284,264. The overall population density of 633 persons per sq km (1,638 per sq mi) is one of the highest in the world for countries. Port Louis, the capital and largest city, has a population (2003 estimate) of 143,000. More than two-thirds of the people are Indian immigrants and their descendants. People of mixed African and European descent, known as Creoles, constitute about a quarter of the total. Chinese and European minorities also exist. The majority of the Indo-Mauritians are Hindus; the rest are Muslims. Most Creoles are Roman Catholics. English is the official language, but Creole, a French patois, is commonly spoken. Other common languages are French, Hindi, and Bhojpuri.

The economy of Mauritius has traditionally been dominated by a single cash crop, sugarcane. More than half the cultivated land is planted with sugarcane; sugar and molasses are major exports. Other crops include tea, peanuts, tobacco, and vegetables. Manufactures include refined sugar and sugar by-products, fertilizers, beverages, electronic components, and leather goods. The clothing and textile industry boomed during the 1980s, and tourism is increasingly important. The currency of Mauritius is the Mauritian rupee, which consists of 100 cents (31.30 rupees equal U.S.$1; 2007 average).

From 1968 through 1991 Mauritius was a constitutional monarchy; executive power was nominally vested in the British monarch, as represented by a governor-general. In March 1992 the country became a republic. Under the 1992 constitution, the head of state is a president, elected to a five-year term by the legislature. The president appoints a prime minister (traditionally the leader of the majority party in the legislature), who is the chief executive. The legislative body is the National Assembly, which consists of 62 directly elected representatives and 4 others appointed by the Supreme Court to ensure representation of various ethnic groups. National Assembly members serve five-year terms.

Although it has been settled for less than 400 years, Mauritius was probably visited by the Arabs before the 10th century, the Malays in the 1400s, and the Portuguese in the early 1500s. It was occupied in 1598 by the Dutch, who named it for Maurice of Nassau, then stadtholder of The Netherlands. The Dutch left in 1710, and in 1715 the French took possession, renaming it Île de France. It was captured by the British in 1810 during the Napoleonic Wars and was formally ceded to Britain in 1814. To offset the labor problem arising from abolition of slavery in the British Empire, the planters were allowed to import indentured laborers from India, and since 1861 the population has been mainly Indian.

Mauritius was granted independence on March 12, 1968. A member of the Commonwealth of Nations, the Afro-Malagasy Mauritian Common Organization, and the Organization of African Unity, Mauritius also has a special arrangement with the European Union under the Lomé Convention.

The Mauritius Labor Party (MLP), headed by Sir Seewoosagur Ramgoolam, governed Mauritius during the first 14 years of independence. The opposition Mauritian Militant Movement (MMM) gained strength throughout the 1970s and in 1982 swept to power, under the leadership of Anerood Jugnauth. Ousted from the MMM in a power struggle, Jugnauth formed a new party, the Mauritian Socialist Movement (MSM), which, in alliance with the MLP, won a parliamentary majority in 1983. Jugnauth’s coalition was reelected in 1987 and 1991.

In 1992 Mauritius became a republic, and the Mauritian National Assembly elected Cassam Uteem president. In December 1995 legislative elections the MSM was unanimously voted out in favor of a coalition of the MLP and the MMM. Navin Ramgoolam, leader of the MLP and son of Sir Seewoosagur Ramgoolam, replaced Jugnauth as prime minister. The MLP-MMM coalition fell apart in 1997. In September 2000 a MSM-MMM coalition swept legislative elections, and Jugnauth became prime minister once again. Jugnauth resigned in 2003 and was replaced as prime minister by longtime Mauritian political figure Paul Bérenger. Jugnauth was subsequently elected president by the National Assembly.