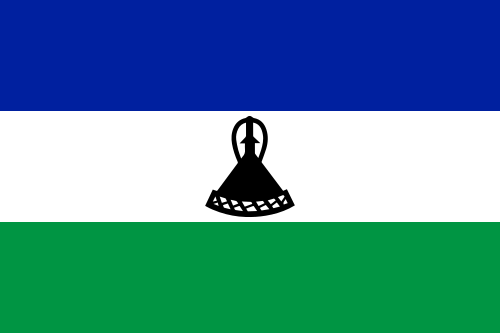 Lesotho, formerly Basutoland, country in southern Africa, bordered on all sides by South Africa. Lesotho is one of only three nations in the world to be completely encircled by a single country (the others are San Marino and Vatican City). Its dependence on South Africa for access to the outside extends to economic reliance as well, and has deeply affected the development of the country since independence in 1966. The kingdom of Lesotho is mainly mountainous and has a total area of 30,355 sq km (11,720 sq mi). The capital and largest city is Maseru.

LAND AND RESOURCES OF LESOTHO

In the west, lowlands varying from about 1,500 to 1,800 m (about 5,000 to 6,000 ft) above sea level provide most of the cultivable area of Lesotho. The land rises in the east to the Drakensberg Mountains, with heights of more than 3,400 m (more than 11,000 ft). The Orange River has its source in Lesotho. The climate is mild, with hot summer days in the lowlands relieved by cool nights. Winter can be cold, particularly in the mountains, and heavy snows occasionally occur. Precipitation falls mostly from October through April. In Maseru, located in the lowlands, average temperatures range from 14° to 28°C (57° to 82°F) in January and from -1° to 16°C (30° to 61°F) in July. The city averages 690 mm (27 in) of precipitation annually.

Lesotho is poor in resources. The principal source of wealth is livestock raised on the country’s grazing land. Lesotho’s rivers and mountainous terrain offer potential for hydroelectric development. Some diamonds are found, although the country’s only large production mine closed in the early 1980s.

Much of Lesotho is permanent pasture, and there is a problem of erosion arising from unrestricted grazing. Because of the low organic content, much of the soil lacks fertility. While there are no forests in Lesotho, some reforestation has occurred. However, this is not enough to keep pace with the growing demand for fuelwood, which provides a large part of the energy requirements of the country. Less than one-half of the population has access to safe water.

Almost all the inhabitants of Lesotho are black Africans, and most are Basotho (a division of the Sotho ethnic group). There are small communities of Europeans and Asians. Only 18 percent of the population is classified as urban; most live in small villages centered in communal agricultural land. The traditional tribal structure of village life has been maintained in part through land-use control by village and district chiefs.

The population of Lesotho (2009 estimate) is 2,130,819. The overall population density is 70 persons per sq km (182 per sq mi). The annual population growth rate stood at 0.1 percent in 2009. Life expectancy at birth was 40 years for women and 41 years for men. The only city of significant size in Lesotho is Maseru.

Religion and Languages spoken in Lesotho

About 91 percent of the people of Lesotho are Christians, mainly Roman Catholics, Lesotho Evangelicals, and Anglicans. Most of the remainder follow traditional beliefs. English and Sesotho, a Bantu language, are the country’s official languages.

Education is compulsory between the ages of 6 and 12, and virtually all school-age children are enrolled. Christian missions under the direction of the minister of education operate most schools, which are free at the primary level. In 2006 some 424,900 pupils attended 1,283 primary schools, and 94,000 pupils attended secondary and vocational schools. The National University of Lesotho (1966), in Roma, is attended yearly by about 1,400 students and has a teaching staff of more than 200. The Lesotho Agricultural College (1955) is in Maseru. Lesotho has a literacy rate of 86 percent.

The economy of Lesotho is based almost entirely on agriculture, livestock raising, and the earnings of Basothos employed outside the country. Due to Lesotho’s limited resources many people, particularly men, reside outside the country for a portion of each year working as laborers. About two-fifths of the adult male labor force works in South Africa. Gross domestic product, which does not reflect remittances from workers out of the country, stood at $1,600 million in 2007, or $797.70 per person. Tourism, particularly from South Africa, has expanded rapidly. In 2007 the estimated annual budget included revenues of $1,007 million with expenditures totaling $758 million.

Currency and Foreign Trade in Lesotho

The currency unit in Lesotho is the loti (plural maloti), which is divided into 100 lisente (7 maloti equal U.S.$1; 2007 average). Most trade is with South Africa, with which Lesotho is linked in a customs union, along with Botswana, Namibia, and Swaziland. In the early 1990s principal exports were wool, mohair, wheat, cattle, peas, beans, corn, hides, and baskets. Chief imports were corn, building materials, clothing, vehicles, machinery, medicines, and petroleum. In 2007 imports cost $1,799 million and exports earned $795 million. Remittances from workers in South Africa were estimated at more than $300 million in the early 1990s.

Transportation and Communications in Lesotho

Roads are located mainly in western Lesotho, with many mountainous areas still accessible only by horse or pack mule. Several towns have small airfields. Maseru is linked by railroad to South Africa. In 1996 Lesotho had 2 daily newspapers with a combined circulation of 15,000.

Under the terms of the constitution of 1965, which was suspended in 1970, Lesotho was a constitutional monarchy with a bicameral legislature. After a coup in 1986, legislative and executive powers were vested in the king but actually exercised by a 6-member military council and a 20-member council of ministers. In 1993 Lesotho adopted a new constitution that redefined the role of the monarchy and altered the legislative branch of the government. The king, who is head of state, has no executive or legislative authority. Executive power is held by the prime minister. The prime minister is the leader of the majority party in the National Assembly and is responsible for appointing a cabinet. The National Assembly, the main legislative body, has 120 members who serve five-year terms. Two-thirds of the members are directly elected by universal adult suffrage, and the remainder are elected by proportional representation (in which voters vote for individual parties, and seats are awarded based on the parties’ share of the vote). The 33-member Senate, made up of traditional chiefs and nominated representatives, is an advisory legislative body. Lesotho has ten districts, which are subdivided into wards and administered by hereditary chiefs.

The original inhabitants of what is now Lesotho were the San. By the 16th century Sotho groups had settled in the region. In the early 19th century, Shaka, a Zulu chief in southeastern Africa, began to expand the Zulu empire, causing the forced migrations of many different peoples during a period known as the mfecane. At that time Moshoeshoe, a leader of a Basotho village, led his people to the mountain of Butha-Buthe, where they survived several battles. In 1824 Moshoeshoe moved to a better protected site on the top of another mountain, called Thaba Bosiu. His policy of granting protection to refugees from other conflicts meant that he gathered an increasingly large group of people under his authority. This group eventually formed Basutoland.

In the 1830s white settlers from the Cape Colony, called Afrikaners, or Boers, left the colony because they felt oppressed by British rule and began to invade Moshoeshoe’s territory. The Basotho fought the settlers in numerous border incidents. Fighting between Moshoeshoe’s forces and those of the Afrikaners continued until the 1860s, and Moshoeshoe lost some of his land. In 1868 Moshoeshoe asked for British help, and Britain made Basutoland a protectorate. Moshoeshoe died in 1870. In 1871 Basutoland was placed under the control of the Cape Colony, but Britain resumed direct control in 1884, after a war between the Cape Colony government and the Basotho.

Once the Cape Colony and other British colonies were united to form the Union of South Africa (later the Republic of South Africa) in 1910, the British government assumed that Basutoland would eventually be incorporated into South Africa. The South African government repeatedly requested this incorporation, but the Basotho consistently refused. The Basutoland National Council, created in 1910, asked the British government for internal self-government in 1955. In 1960 an elected legislative council was established. When general elections were held in 1965, the Basutoland National Party (BNP, which became the Basotho National Party at independence) won a majority of seats in the legislature; the leader of the BNP, Chief Joseph Leabua Jonathan, became prime minister. Basutoland became the independent country of Lesotho on October 4, 1966. The king, Moshoeshoe II, attempted to enlarge his authority, but his efforts were checked by the prime minister.

In national elections held on January 27, 1970, the first since independence, the opposition Basotho Congress Party (BCP) led by Ntsu Mokhehle seemed to have the winning edge. Prime Minister Jonathan then nullified the elections and declared a state of emergency. The constitution and parliament were suspended, and Jonathan undertook to govern the country by decree. In 1973 an interim National Assembly of nominated members absorbed the old assembly and Senate. Supporters of the BCP staged an armed uprising in 1974. When it failed, the leaders formed a Lesotho Liberation Army that during the following years engaged in frequent clashes with the paramilitary police. Jonathan accused South Africa of collusion with the rebels, and relations with that country were consequently strained.

In 1986 Jonathan was overthrown in a military coup led by Major-General Justin Lekhanya. Executive and legislative powers were nominally vested in King Moshoeshoe but were actually exercised by a military council headed by Lekhanya. After Moshoeshoe refused to approve Lekhanya’s dismissal of several members of the military council in 1990, the king was stripped of power and exiled. Moshoeshoe was officially dethroned later that year, and his son, Letsie David Mohato Bereng Seeiso, was enthroned as Letsie III.

In 1986 construction began on the Lesotho Highlands Water Project, which will divert water from the headwaters of several rivers in Lesotho to the Witwatersrand region of South Africa. The project, which is scheduled for completion in 2015, is intended to boost Lesotho’s economy through the creation of jobs, improvements in infrastructure, and payments from South Africa for water use. It will also reduce Lesotho’s dependence on South Africa for electricity through the construction of a hydroelectric power plant.

Lesotho’s military government allowed free legislative elections in 1993. The BCP won every seat and elected Mokhehle prime minister. However, in August 1994 King Letsie, claiming to be responding to popular dissatisfaction with the Mokhehle administration, dissolved the cabinet. After other African leaders, including South African president Nelson Mandela, Zimbabwean president Robert Mugabe, and Botswanan president Quett Ketumile Joni Masire, criticized Letsie, he restored power to Mokhehle in September. In 1995 Letsie abdicated and restored the crown to his father, Moshoeshoe II, who pledged to uphold the constitution. On January 15, 1996, Moshoeshoe II was killed in an automobile accident on his way back to Maseru from inspecting his cattle herds. Letsie succeeded him, taking the throne once again as Letsie III.

In 1997, in the midst of a power struggle within the BCP, Mokhehle resigned from the party and formed the Lesotho Congress for Democracy (LCD) while retaining the office of prime minister. Mokhehle retired from politics before the May 1998 legislative elections and was succeeded as LCD leader by Pakalitha Mosisili. The LCD won all but two seats in the National Assembly, which then had a total of 80 members. Mosisili became prime minister. Opposition groups protested the election results, and political tension intensified in August, when members of the army joined the protestors. South African troops intervened in September to prevent a coup but met with fierce resistance from rebels and from ordinary citizens, many of whom viewed the intervention as an invasion. Rioting and looting swept Maseru, destroying much of the city. LCD leaders and opposition parties worked out an agreement in October to hold new elections to the National Assembly, expanded to 120 members.

In these elections, held in 2002, the LCD won 77 seats in the legislature, and the Basotho National Party (BNP) won 21 seats. The LCD splintered in October 2006, with defections to a newly formed opposition party, the All Basotho Convention (ABC), leaving the LCD with only 61 members in the legislature. However, early legislative elections held in 2007 returned 77 seats to the LCD. Opposition parties organized a general strike to dispute the results, which they claimed were rigged in the LCD’s favor.