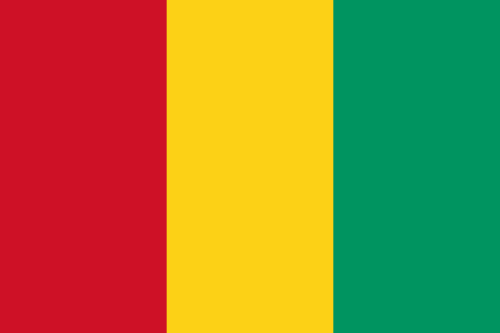 Guinea, formerly People’s Revolutionary Republic of Guinea, independent nation in western Africa, bounded on the north by Guinea-Bissau, Senegal, and Mali; on the east and southeast by Côte d’Ivoire; on the south by Liberia and Sierra Leone; and on the west by the Atlantic Ocean. The total area of the country, including the Los Islands of Conakry, is 245,857 sq km (94,926 sq mi). Conakry is the capital and largest city.

LAND AND RESOURCES OF GUINEA

Guinea has four major topographic regions. Lower Guinea, the coastal plain, extends about 50 km (about 30 mi) inland from the shoreline, which is about 275 km (about 170 mi) in length. Beyond the coastal plain is middle Guinea, the Fouta Djallon (Futa Jallon), a mountainous plateau region with an average elevation of about 910 m (about 3,000 ft). Upper Guinea is gently undulating savanna country broken by occasional rocky outcrops with an average elevation of 300 m (1,000 ft). In the extreme southeast are forested highlands. Found here, in the Nimba Range, is the highest point in the country (1,752 m/5,748 ft).

The principal rivers are the Bafing (the upper course of the Sénégal) and the Gambia, both of which rise in the mountains of the Fouta Djallon and flow northeast over the country’s borders. Many smaller rivers rise in the Fouta Djallon and descend to the coastal plain where they divide into many branches. The Niger and its important tributary, the Milo River, originate in the forested Guinea highlands.

The dominant factor in the considerable climatic variation is altitude. Rainfall is highest and range of temperature lowest in lower Guinea. Conakry, the capital, has an annual rainfall of 4,420 mm (174 in) and an annual average temperature of 27°C (about 81°F). In the Fouta Djallon, annual rainfall averages 1,800 mm (about 70 in) and the average annual temperature is 20°C (about 68°F). In upper Guinea annual rainfall is less than in the Fouta Djallon, and the annual average temperature is 21°C (about 70°F). In the Guinea highlands annual rainfall averages 2,800 mm (about 110 in). The highest temperatures are also found in this region. The climate in the highlands is equatorial with no clearly distinguishable seasons. The rainy season in the remainder of the country occurs from April or May to October or November. April is the hottest month and July or August the wettest.

The mineral wealth of Guinea makes the economy of this country potentially one of the strongest in Africa. About one-third of the known world reserves of high-grade bauxite ore is found in Guinea. Sizable deposits of iron ore exist; other known mineral resources include diamonds, gold, petroleum, uranium, cobalt, nickel, and platinum. Guinea also has great potential for hydroelectric power.

Plants and Animals in Guinea

The vegetation of Guinea varies considerably. Dense mangrove forests abound along the coast and the riverbanks. The Fouta Djallon, which has been subject to extensive burning, is covered with sedge. The higher plateau areas have dense forests. Upper Guinea is characterized by savanna woodland. Trees include the shea and the tamarind. The Guinea highlands are characterized by dense rain forests.

Animal life is abundant and varied. Snakes and crocodiles are common, and numerous species of tropical birds abound, including parrots and touracos. Mammals include leopard, hippopotamus, wild boar, antelope, and civet.

Guinea’s population has poor access to safe water supplies and sanitation. Population growth is rapid and is outstripping improvements in agricultural output. The government has established a national park and several reserves. Guinea suffers from desertification, soil contamination and erosion, and overfishing.

The ethnic makeup of the people of Guinea is diverse. The most numerous of the groups (about 35 percent of the population) are the Fulani, who are concentrated mainly in the Fouta Djallon. The other principal groups comprise people of the Mande group. They include the Mandinka (also known as Mandingo or Malinke) (about 30 percent) of northeastern Guinea and the Susu (about 20 percent), who inhabit the coastal area. According to the 1983 census, the population of Guinea was 5,781,014. The estimated population in 2009 was 10,057,975, giving an overall population density of 41 persons per sq km (106 per sq mi). Some 64 percent of the population live in rural areas. The capital is Conakry, a seaport on the Atlantic Ocean. Other major cities are the railroad centers Kankan and Kindia.

Religion and Languages spoken in Guinea

About 67 percent of the population of Guinea is Muslim, 28 percent adhere to traditional beliefs, and 4 percent are Christians. French is the official language. The country has eight national languages: Mandinka (also known as Mandingo and Malinke), Susu, Fulfulde, Kissi, Basari, Loma, Koniagi, and Kpelle.

Education is free and officially compulsory for all children between the ages of 7 and 12, but in 2006 only 72 percent of eligible children actually attended primary school; the enrollment ratio dropped to 24 percent for secondary schools. The adult literacy rate is 41 percent. Private schools were nationalized by 1962. Higher education is provided by universities at Conakry and Kankan and by 21 other institutions.

Guinea has about 1,045 km (about 650 mi) of railroads. The major line links Conakry and Kankan. Other lines link the ports, Conakry and Kamsar, to bauxite mines. Guinea has 44,348 km (27,557 mi) of roads, 10 percent of which are paved. Conakry has an international airport.

In 2000 there were 51 radio receivers and 46television sets in use for every 1,000 inhabitants. Television and radio broadcasting is operated by a state-run company based in Conakry.

A military coup overthrew Guinea’s government in 1984. The military rulers oversaw the writing of a new constitution, which was approved in a national referendum in 1990. It authorized a transitional government to oversee the change to a two-party, civilian system with a unicameral legislature of 114 seats and universal adult suffrage. In 1992 amendments authorized an unlimited number of political parties. The head of state is a directly elected president. In 2001 a constitutional amendment removed the two-term limit on the presidency and extended the presidential term of office from five to seven years.

Parts of northern and eastern Guinea were within the empires of Mali and Songhai, and the ruling classes among the Mandinka population were early introduced to Islam. The spread of Islam throughout Guinea was largely a result of the missionary activities of the Torobde clan of the Fulani, a pastoralist people, who established a theocratic state in highland areas of the Fouta Djallon in the early 18th century. By the mid-19th century, continual Islamic proselytizing had converted most of the population with the exception of those living in the Mossi states, who resisted and retained their animistic beliefs. In the 1880s Samory Touré, a Mandinka adventurer, used modern weapons to seize control over much of the interior.

The French government in the last quarter of the 19th century authorized annexation by conquest and diplomacy of much of the western Sudan. Its armies captured Tombouctou, pushed French claims as far as Lake Chad, and went on to occupy the Guinea coastline. In 1891 Guinea was declared a French colony separate from Senegal. Samory provided the only concerted resistance to French occupation of coastal and highland Guinea until he was finally defeated in 1898. The next year the upper Niger districts were added to the territory, and in 1906 Guinea became part of the French West African Federation, headed by a governor-general. French rule was generally moderate, with local rulers retaining much authority.

In the years that followed, Conakry became an important port city. Many Guineans were employed there and allowed to organize their own trade unions. Sékou Touré, a great-grandson of Samory and the head of the powerful General Union of Workers of Black Africa, led the agitation in the 1950s for more African representation in government. In 1952 Touré became the secretary general of the Democratic Party of Guinea.

In the September 1958 plebiscite, Guinea was the only territory to reject the constitution of the Fifth French Republic. This caused immediate severance of political and economic ties with France. Guinea achieved independence on October 2, 1958, with Touré as president of the new nation.

Once independent, Guinea turned to the Eastern European countries for assistance. Touré established a one-party state and imposed a strict socialist system. In 1961 Guinea joined with Ghana and Mali in the Union of African States, a loose federation that lasted only two years. After surviving several assassination attempts, Touré accused French officials of plotting his overthrow and broke off relations with France in November 1965. Guinea’s relations with Côte d’Ivoire, Niger, Senegal, and Burkina Faso continued to be stormy until 1978. Touré’s self-imposed diplomatic isolation and ill-planned economic ventures bankrupted the state and forced him to begin liberalizing the government. He then traveled widely to improve foreign relations and seek investors to exploit Guinea’s considerable mineral resources. In 1982 a new constitution was issued that strengthened the power of the ruling Democratic Party of Guinea. After Touré died in March 1984, however, a military coup led by Colonel Lansana Conté ousted the interim government. Conté became president and leader of the Military Committee for National Rectification. He freed political prisoners, began to dismantle the socialist system, reduced the power of the army, and improved relations with France and neighboring states. A 1985 attempt to overthrow the Conté government failed. In the late 1980s Guinea sought to attract Western capital by liberalizing investment regulations.

In 1990 a new constitution was adopted authorizing a transitional committee to establish the framework for a civilian government. In December 1993 President Conté was confirmed in office in Guinea’s first multiparty elections. His rule was challenged by a widespread army mutiny in 1996 and the outbreak of an armed rebellion in 2000. Conté was reelected in 1998 and 2003. Most opposition parties boycotted the 2003 election and accused the government of rigging the vote.

In December 2008 Conté died in office. In the aftermath of his death, an army captain, Moussa Dadis Camara, and several other junior officers seized power in a military coup. Camara dismissed the heads of the army and navy along with about 20 other top officers. He promised to end corruption in government and to hold elections within the year. Camara also pledged not to run in those elections. The coup appeared to have significant popular support. The African Union (AU) suspended Guinea from membership because it was no longer a constitutional government, and the United States announced that it would stop sending aid. However, the AU did not impose sanctions, and several neighboring states indicated they would be willing to work with the new leaders. In early January the new military junta arrested several senior military officers.