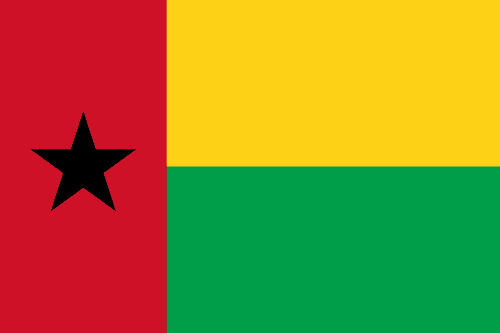 Guinea-Bissau, republic in northwestern Africa, bounded on the north by Senegal, on the east and south by Guinea, and on the west by the Atlantic Ocean. The country includes about 60 offshore islands, among them the Bijagós (Bissagos) Islands. The area is 36,125 sq km (13,948 sq mi).

LAND AND RESOURCES OF GUINEA BISSAU

Most of Guinea-Bissau is a low-lying, swampy coastal plain. The land rises gradually to form a plateau region in the east. The maximum elevation of about 310 m (about 1,017 ft) is found in the southeast. Numerous meandering rivers cross the country from east to west and form wide estuaries near their mouths. Nearly all are navigable and serve as major transportation arteries. The climate is tropical, with a mean annual temperature of 25°C (77°F). A rainy season lasts from June to November. The average annual rainfall at Bissau is 1,950 mm (77 in). Vegetation consists of mangrove and rain forest on the coastal plain and a savanna woodland on the interior plateau. Tropical hardwoods are a major potential resource. Although there is no mineral production, large deposits of bauxite and phosphate exist. Petroleum deposits are offshore.

Guinea-Bissau has a population (2009 estimate) of 1,533,964. The capital and principal port, Bissau, has a population (2003 estimate) of 336,000. Other ports include Cacheu and Bolama. The major ethnic groups are the Balante, Fulani, Mandinka (also known as Mandingo or Malinke), Mandyako, and Pepel. Cape Verdians form a small but significant minority. In religion, about 45 percent of the population follows traditional beliefs, and about 40 percent (primarily the Fulani and Mandinka) is Muslim. Some 13 percent of the people are Christian. The official language is Portuguese, but Crioulo, a fusion of Portuguese and African elements, is widely spoken. In the 2001 school year primary schools enrolled 155,033 students, 83 percent of the eligible students. Only 20 percent of secondary school-aged children were enrolled in school. The country has several teacher-training colleges. The government has undertaken a program to improve the adult literacy rate, which stood at 65 percent in 2007.

ECONOMY AND GOVERNMENT OF GUINEA BISSAU

The economy of Guinea-Bissau is dominated by subsistence agriculture. Food crops include rice (which is the staple food of the population), plantains, cassava, and maize. The principal export crops include cashew nuts, which account for more than half of export earnings; peanuts, which are grown in the interior; palm products, raised on the islands and in the coastal region; and cotton. The fishing industry has grown rapidly and is a major source of export earnings. Cattle breeding is important in the interior. Manufacturing is mainly limited to the processing of raw materials and the production of basic consumer goods. The country has 3,455 km (2,147 mi) of roads. The unit of currency is the CFA franc, consisting of 100 centimes (479.3 francs equal U.S.$1; 2007 average).

Guinea-Bissau’s constitution was enacted in 1984 and has been amended several times. According to this constitution, the president, who is directly elected to a five-year term, is head of state. The president may serve no more than two terms of office. Legislative power is vested in the 102-member National People’s Assembly, the members of which are directly elected to four-year terms. The legislature elects the 15-member Council of State and its prime minister, who heads the government. A political liberalization program approved in 1991 ended one-party dominance in Guinea-Bissau. Numerous political parties emerged over the course of the 1990s. The nation held its first multiparty presidential and legislative elections in 1994.

The early history of Guinea-Bissau is obscure, but some of the major ethnic groups of the country, such as the Balante and Pepel, were apparently established there by the 12th century. The area was visited in 1446 by Nuno Tristão, a Portuguese slave trader, and became an important slave center. A Portuguese post was established at Bissau in 1687, but the Portuguese claim was disputed by the French and the British, and in 1792 the latter briefly had a settlement at Bolama. In 1879 the region was constituted a Portuguese colony, and border disputes with the French were settled by treaty in 1886. Not until 1915, however, were the Portuguese able to exercise effective control over the country.

The status of Guinea-Bissau was changed from colony to overseas province in 1952; soon afterward an African nationalist movement arose, led by the African Party for the Independence of Guinea and Cape Verde (PAIGC). After sporadic violence, the party launched a war of independence in the early 1960s. By September 1973 the rebels proclaimed an independent republic and sought international recognition. On September 10, 1974, Portugal formally granted Guinea-Bissau independence.

Guinea-Bissau’s new government, under the presidency of PAIGC leader Luis de Almeida Cabral, established a monopoly over foreign trade and moved toward a socialist state by authorizing nationalization of all landholdings. In 1980 President Cabral was overthrown in a coup led by Prime Minister João Bernardo Vieira. Elected to a five-year term in 1984, President Vieira and his military-dominated government survived a coup attempt in 1985. Vieira was reelected in 1989, 1994, and then again in 2005, following a military coup in 1999.

In mid-1998 an army rebellion erupted following Vieira’s dismissal of the army chief of staff, General Ansumane Mane. Fighting between rebel troops and soldiers loyal to the government raged off and on through May 1999, when rebel forces, led by Mane, successfully overthrew Vieira. Mane turned power over to PAIGC statesman Malam Bacai Sanha, the speaker of the National People’s Assembly, who was declared acting president. Kumba Yalá of the Party of Social Renovation defeated Sanha in presidential elections, held in two rounds, in November 1999 and January 2000. Yalá clashed with other government leaders, firing the prime minister in 2001 and dissolving the legislature in late 2002. He was overthrown in September 2003 by army officers who accused Yalá of violating the constitution.

Guinea-Bissau restored civilian rule in 2005, holding presidential elections in July of that year. Vieira defeated Sanha to win the presidency in an election that was declared free and fair by international monitors. In March 2009 Vieira was killed in an apparent revenge attack for the death of armed forces chief General Batista Tagme Na Wai. The speaker of the parliament, Raimundo Pereira, was sworn in as interim president until new elections could be held. In July 2009, Sanha was elected president, defeating Yalá in a run-off.