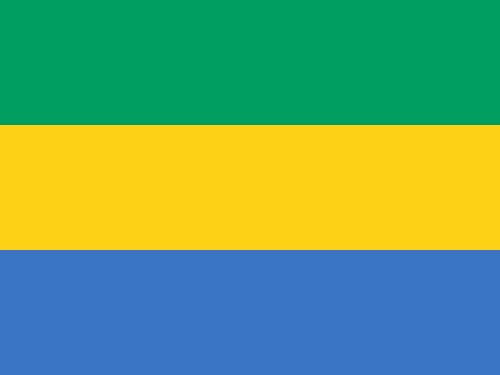 Gabon, officially Gabonese Republic (French République Gabonaise), independent nation in west central Africa, bounded on the northwest by Equatorial Guinea, on the north by Cameroon, on the east and south by the Republic of the Congo, and on the west by the Atlantic Ocean. The area of Gabon is 267,667 sq km (103,347 sq mi). Libreville is the capital and largest city.

LAND AND RESOURCES OF GABON

A belt of coastal lowlands, generally narrow in width, is found in the western part of Gabon. To the interior is the plateau zone, which extends over the entire northern and eastern sections of Gabon and part of the south. The Cristal Mountains in the north are about 900 m (about 3,000 ft) high. The central Chaillu Mountains contain Mount Iboundji (972 m/3,189 ft), the highest summit in the country. This escarpment is crossed by numerous rivers, notably the Ogooué River, which empties into the Atlantic Ocean. Virtually the entire country is contained in the basin of the Ogooué River, which is navigable to Ndjolé. Some 81 percent of the land is covered by a dense equatorial rain forest.

Gabon has a hot and humid climate. The temperature varies only slightly throughout the year. The average daily temperature is 27°C (80°F). The dry seasons are from May to September and December to January, while the rainy seasons are from February to April and October to November. At Libreville the average annual rainfall averages 2,520 mm (99 in).

Gabon is rich in mineral resources. The country has deposits of uranium, manganese, and petroleum, all of which are being exploited; large deposits of iron ore, considered among the richest in the world, have also been found, and lead and silver ores have been discovered. Gabon also has valuable forest resources, mainly in its stands of okoume, mahogany, kevazingo, and ebony.

Mineral production in Gabon has kept pressure off the forests as a source of revenue. As a result, about 69.3 percent (1995) of Gabon remains covered in forest, and wildlife is abundant. Protected areas cover 2.8 percent (1997) of the country, and hunting is prohibited. However, enforcement is weak, and some species of wildlife are under threat from poaching.

The ethnic makeup of the Gabonese is diverse, although almost all the inhabitants are Bantu-speaking. Of the country’s approximately 40 ethnic groups, most people belong to the Fang, Mpongwe, M’Bete, and Punu groupings. Europeans, mostly French, form a small but prominent minority. Pygmies are believed to have been the original inhabitants of the country, but only a few thousand remain. About 90 percent of the population is Christian, primarily Roman Catholic, and about 5 percent is Muslim. The official language is French.

Gabon has a population (2009 estimate) of 1,514,993. The overall population density is 6 persons per sq km (15 per sq mi). Some 85 percent of the people live in urban areas. Much of the country’s interior is uninhabited.

Libreville, the capital and largest city of Gabon, has a population (2003 estimate) of 611,000. Port-Gentil (125,000) is the center of the plywood and petroleum industries. Lambaréné is the center for the oil-palm plantations in the region and the site of the hospital established by German-born medical missionary Albert Schweitzer.

Schooling is officially compulsory in Gabon for all children between the ages of 6 and 16, though not all children in that age group actually attend schools. In the 2004 school year 281,400 pupils attended primary schools, and 105,200 students were enrolled in secondary schools. The country has technical institutions and teachers colleges, as well as a university, the Université Omar Bongo (founded in 1970). An estimated 86 percent of adults in Gabon are literate.

The economy of Gabon is largely dependent on the exploitation of mineral and forest resources, particularly oil. While Gabon’s gross domestic product of $8,696.50 per capita in 2007 was the highest in Africa, the economy fluctuates with world petroleum prices. The national budget in 1993 included revenues of $1.3 billion and expenditures of 1.6 billion.

The economy of Gabon has a large subsistence agriculture sector, occupying 52 percent of the active labor force. Cassava, plantains, sugarcane, yams, and taro are grown for home consumption, and small amounts of cacao, coffee, palm oil, peanuts, and pepper are grown for export. Surplus sugarcane is also refined and exported.

Forestry and Fishing in Gabon

Gabon is the world’s largest producer of okoume, a softwood that is used to make plywood. In 2007 the timber cut in Gabon was 3.9 million cu m (139 million cu ft). The government is engaged in preservation and reforestation programs. The fish catch in 2007 was 41,647 metric tons.

Mining has developed rapidly since Gabon’s independence in 1960. Annual production of extremely high-grade manganese ore, from Moanda in the southeast, was 1,350,000 metric tons in 2006. The rich deposits of iron ore located at Mekambo and Bélinga in the northeast have reserves estimated at more than 500 million metric tons. Exploitation of the iron ore has been hampered by the lack of transportation facilities, particularly railroads. Uranium production annually totaled about 710 metric tons in the early 1990s. Petroleum is extracted along the coast and offshore. Petroleum production, which stood at 56.8 million barrels annually in the late 1980s, was declining due to depletion of reserves until a major new field was tapped. Production increased to 88 million barrels in 2004. Oil refineries are located at Port-Gentil and Pointe Clairette. Production of petroleum products is about 491,000 metric tons per year. Some gold also is mined.

Gabon has a small manufacturing sector, the leading products being refined petroleum and wood items. Other manufactures include processed food, beer, and cement. Some 1,670 million kilowatt-hours of electricity were generated in 2006. Hydroelectric facilities, primarily an installation at Kinguélé, near Libreville, accounted for 56 percent of the total amount.

Currency and Foreign Trade in Gabon

The currency of Gabon is the CFA franc (479 CFA francs equal U.S.$1; 2007 average). An exchange rate of 50 CFA francs equal to 1 French franc was in force from 1948 to 1994, when the CFA franc was devalued by 50 percent. In 2007 exports earned Gabon $7.1 billion, and imports were valued at $1,933 million. Gabon is one of the few countries in Africa to maintain a positive balance of trade. Principle partners for exports are France, the United States, Germany, and Japan; chief partners for imports are France and other African countries.

Transportation and Communications in Gabon

Gabon has 9,170 km (5,698 mi) of roads, of which about one-tenth percent are paved. An 869-km (540-mi) highway crosses Gabon from north to south, linking the country with Loubomo in the Republic of the Congo and Douala in Cameroon. Government planning has stressed road construction. Before the 1970s, the country’s only railroad linked Mbinda (the Congo) with the Pointe Noire-Brazzaville Line. Construction began in 1974 on the 697-km (433-mi) Trans-Gabon Railroad; a section between Owendo and Booué was completed in 1982, and the extension to Franceville in the southeast was inaugurated in 1986. A link to the iron-ore deposits of the northeast is also planned. Owendo and Port-Gentil are the principal ports. The Ogooué River and its tributaries, the Ivindo and Ngounie rivers, provide navigable waterways. Gabon has a well-developed domestic air transportation network. The government operates television and radio stations. There were 489 radio receivers and 321 television sets in use for every 1,000 inhabitants in 1999.

Under the 1961 constitution, as amended, the president of Gabon was directly elected for a seven-year term, serving as both chief of state and head of government. The unicameral National Assembly comprised 111 elected and 9 appointed members. The Gabonese Democratic Party was the sole legal political party.

Gabon entered a period of political transition as the 1990s began. In 1990 the ban on multiparty politics was lifted. A new constitution was adopted in March 1991. Under this constitution, a president serves as Gabon’s head of state. The president is directly elected to a seven-year term. A prime minister appointed by the president serves as head of government. There is a bicameral (two-chamber) legislature composed of a National Assembly (lower house) and a Senate (upper house). The 120 members of the National Assembly are directly elected to five-year terms. The 91 members of the Senate are elected to six-year terms by local government councils.

Gabon consists of nine provinces, each with an appointed governor. The judiciary comprises the Supreme Court, the High Court of Justice, a court of appeal, and a court of state security, as well as several courts of first instance. In 2006 the armed forces included an army of 3,200 personnel, a navy of 500, and an air force of 1,000.

Discoveries of tools from the end of the Old Stone Age and the New Stone Age indicate early settlements in what is now Gabon, but little is known about the first inhabitants. By the 13th century AD the Mpongwe people were established in the country. The first contact with Europeans was with the Portuguese in the 1470s. During the following 350 years, first the Portuguese and later the French, Dutch, and English carried on a lucrative trade in slaves. The first permanent European settlement was made by the French, with the agreement of the Mpongwe ruler, in 1839. Libreville was founded a decade later by freed slaves. Over the next several years the French extended their rule inland, and in 1866 they appointed a governor to Gabon, which was then attached to the French Congo; it became part of French Equatorial Africa in 1910.

During World War II (1939-1945) Gabon was held by the Free French, and in 1946 it became an overseas territory of France. The first Gabonese government council was formed in 1957, and Léon Mba became president of the council in 1958. Also in 1958, Gabon voted to become an autonomous republic in the French Community. Mba then became prime minister. The country declared its independence on August 17, 1960, and in 1961 Mba was elected president.

A military coup overthrew President Mba’s government in 1964, but French troops, in accordance with a Franco-Gabonese defense agreement, intervened and restored him to power; he was reelected president in 1967. Upon Mba’s death later that year, Vice President Albert-Bernard Bongo succeeded to the presidency. Bongo, who later assumed the Islamic first name Omar, was reelected in 1973. During the mid-1970s Gabon began to loosen its ties with France and the French-speaking regional organizations. With Gabonization, the government became a partner in many foreign firms, and native Gabonese filled management positions once held by foreigners. Favorable markets for Gabonese exports, especially oil, natural gas, uranium, and manganese, contributed to rapid economic expansion during the 1970s, but the economy cooled during the following decade.

Reelected to seven-year terms in December 1979 and November 1986, President Bongo faced rising opposition as the 1990s began. Tentative steps toward a multiparty system were taken in 1990, but the newly legalized opposition parties accused the government of fraud in legislative elections held in September and October. The National Assembly enacted a new constitution in March 1991 formalizing the multiparty system. In December 1993 Bongo received 51.1 percent of the vote in the first presidential elections held under the new constitution. Opposition parties again accused the government of election fraud.

Shortly after the elections a state of alert was declared, banning all demonstrations. Paul Mba Abessole, one of the presidential candidates of the opposition, formed an alternate government called the High Council of the Republic, which was later renamed the High Council for Resistance. In August 1994 the opposition agreed to participate in a transitional coalition government until new legislative elections could be held. These occurred in 1996, and the ruling Gabonese Democratic Party won a significant majority. Bongo was reelected in December 1998 to a seven-year term.

In the November 2005 presidential elections, Bongo was again reelected to another seven-year term. International election observers said there was no evidence of fraud, but two opposition candidates called for a campaign of civil disobedience to protest the results, which they said were fraudulent. Official results showed Bongo winning 79 percent of the vote. Bongo died in office in June 2009. Rose Francine Rogombé was named interim president until new elections could be held.