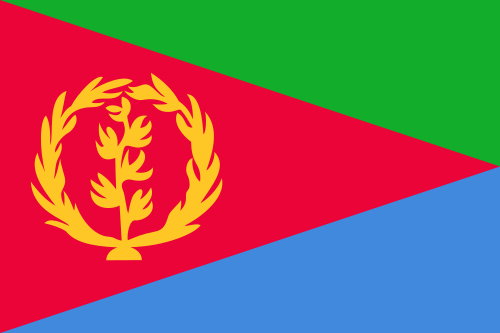 Eritrea, independent state in Africa, bounded on the east by the Red Sea, on the southeast by Djibouti, on the south and west by Ethiopia, and on the north and northwest by Sudan. Formerly under Italian and British control, Eritrea was taken over by Ethiopia in 1952, provoking a long war of liberation that culminated in Eritrean independence in 1993. Asmara (Āsmera) is Eritrea’s capital and largest city.

LAND AND RESOURCES OF ERITREA

Eritrea covers an area of 121,144 sq km (46,774 sq mi). Its topography consists of four types of land surface: the Red Sea coastal plain; the south central plateau highland, which forms the core of the nation; the hill country of the north and midwest; and the broad western plains. The Red Sea coast stretches more than 1,000 km (600 mi), and it is from this body of water that the country derived its name (Erythraea, Greek for “red”). The narrow coastal plain receives little rainfall and is extremely hot. The Denakil Depression in the southeast falls below sea level and has been the site of some of the highest temperatures recorded on earth. To the west, the coastal plain rises sharply to the highland plateau, where altitudes range from 1,830 to 2,440 m (6,000 to 8,000 ft) above sea level and annual rainfall is significantly higher than at the coast. The hill country north and west of the core plateau ranges from about 760 to 1,370 m (about 2,500 to 4,500 ft) above sea level, and it generally receives less rainfall than the plateau. The broad plains lie to the west of the Baraka River and north of the Setit River.

A number of rivers drain the plateau and highland regions. The Mereb (or Gash), the Baraka, and the Anseba flow from the plateau west into Sudan, while the Falkat, Laba, and Alighede flow from the northern highlands to the Red Sea.

Eritrea’s resources have supported a largely agricultural way of life. The nation possesses potentially valuable potash deposits and possibly gold, iron, and petroleum, but exploration and exploitation of its mineral resources were severely hindered by three decades of war.

Eritrea’s environment suffers from frequent droughts and from the effects of the country’s decades-long war of independence. Only 22 percent (1990-1998) of the people in Eritrea have access to safe drinking water. Much of the country’s highland forests have been destroyed for fuelwood, and only 2.8 percent (1995) of Eritrea’s total land area is forested. Marginal lands have been cultivated and overgrazed, leading to soil erosion and desertification. The Eritrean administration has planted millions of trees in recent years to help stop erosion and desertification. In addition, the administration has designated 5 percent (1997) of the country’s total land area as protected. The government has ratified international environmental agreements pertaining to biodiversity, climate change, desertification, and endangered species.

Eritrea’s population is diverse, reflecting many languages, cultures, and religions. The most widely used languages are Tigrinya, Tigre, and Arabic. Approximately half the population are Tigrinya-speaking Christians who traditionally inhabited the core plateau. Half the population are Muslims, but these are divided among several ethnic and linguistic groups. Muslim Tigre speakers inhabit the northeastern coastal plains and western lowlands, and the Saho live near Massawa and in the foothills of the coastal plain. The majority of the Bilen -speaking people around Keren are Muslims, as are the Afar or Denakil who speak Afar and inhabit the southeastern portion of the coastal plain and the Dahlak Archipelago. The Hedareb nomads of the northwest and northeast are predominantly Muslim. The Baria and Kunama of the southwest are also Muslim, although they speak Nilotic languages. This distinguishes them sharply from the majority of Eritrean peoples, whose languages fall within the Afro-Asiatic group (see African Languages). Despite ethnic diversity, friction between Eritrean groups has not been a major problem because most groups remained united during the three decades of war against Ethiopian control.

In 2009 Eritrea had an estimated population of 5,647,168, giving it a population density of 47 persons per sq km (120 per sq mi). An estimated 80 percent of Eritrea’s population lives in rural areas, subsisting through agriculture and livestock raising. The major cities of Eritrea include the capital and largest city Asmara, the seaports Massawa and Āseb, Keren, Nak’fa, Āk’ordat, and Teseney.

The war with Ethiopia and the famines that hit the entire region in the 1970s and 1980s caused a great deal of disruption and population movement, especially in the rural areas. At the time of independence approximately 20 percent of the population within Eritrea was displaced, while an estimated 500,000 Eritreans were living as refugees in Sudan. In addition to problems of food shortage, poverty, and illiteracy, the new nation faces a huge task in resettling those people uprooted by war and famine.

Traditionally, agriculture was the norm in the plateau region and in the north and west where rainfall was sufficient. In the drier coastal plain and the arid regions of the north and west, livestock raising predominated. Italian and British colonial policy in the 19th and early 20th centuries favored the production of raw materials for export. During this period, light industry was developed. By most accounts, Eritrea enjoyed a higher level of economic development than Ethiopia at the time of the 1952 federation. Ethiopia’s annexation of Eritrea caused industrial expansion to be curtailed, and many factories were closed and moved to Ethiopia. After 1974, the Marxist government of Ethiopia placed most Eritrean industry under state control.

Eritrea’s economy suffered massive damage and dislocation as a result of drought, famine and the war with Ethiopia that began in the 1960s. At the time of independence in 1993, the country’s industrial base was shattered and an estimated 75 percent of the population depended on food aid. After good harvests in 1991 and 1992, the harvest of 1993 was a disaster, with more than 80 percent of the grain crop lost because of pests and the lack of rain. Eritrea’s transportation network was also severely damaged. Most roads are unpaved, and those that were paved received little maintenance. The railway linking the port of Massawa to Asmara and to Keren and Āk’ordat was scarcely functional by the end of the war.

An international airport is located in Asmara. A single, government-owned radio station serves Eritrea, and television service was initiated in 1993 for Asmara. The government publishes the newspaper Hadras Eritrea (New Eritrea) in Arabic and Tigrinya.

Following the liberation of Eritrea from Ethiopia in 1991, the Eritrean People’s Liberation Front (EPLF) took over control of administration but agreed to hold a referendum on independence. The electorate approved independence in April 1993, and a four-year transitional period was declared to prepare a constitution. A May 1993 decree set up a formal transitional government under EPLF control. This provided for a National Assembly, a president, and council of ministers. Isaias Afwerki, secretary general of the EPLF, was formally elected president by the National Assembly in June 1993.

A new constitution was approved in 1997. Under this constitution, the National Assembly is the country’s legislature. Its members are popularly elected to five-year terms. A president, elected by the National Assembly to a five-year term, renewable once, serves as the head of state. The Supreme Court is the highest judicial body; its judges are appointed by the president.

Eritrea is divided into six regions for administrative purposes. These regions are under the control of administrators appointed by the president. The main political parties in Eritrea are the former EPLF (renamed the People’s Front for Democracy and Justice, or PFDJ) in 1994, the Democratic Movement for the Liberation of Eritrea, and the Eritrean Liberation Front (ELF).

The earliest food-producing inhabitants of Eritrea are thought to have moved from the Nile valley into the Mereb-Setit lowlands in about 4000 BC. Over the next several thousand years, Eritrea experienced migrations of Nilotic, Cushitic, and Semitic-speaking peoples into what became one of the earliest regions of crop and livestock domestication in Africa. From as early as 3000 BC, Eritrea was involved in trade on the Red Sea. In the 4th century AD Eritrea was a part of the ancient Ethiopian kingdom of Aksum. It flourished as a semi-independent state under nominal Ethiopian sovereignty until it was annexed in the 16th century by the expanding Ottoman Empire.

Eritrea was established as an Italian colony on January 1, 1890. Italian rule lasted until World War II (1939-1945) when British forces conquered the territory. British military administration lasted from 1941 until 1952 when the United Nations decided to federate Eritrea with Ethiopia as a compromise between Ethiopian claims for annexation and Eritrean demands for independence. Once in control, Ethiopian Emperor Haile Selassie moved to end Eritrean autonomy, and by 1962 Eritrea was transformed into an Ethiopian province.

The dissolution of federation called forth a militant nationalist resistance from a people subjected to continued colonial domination. The Eritrean Liberation Front (ELF), founded in 1958, had proclaimed an armed struggle in September 1961 in favor of independence from Ethiopian control. The war with Ethiopia proved long and destructive. Since 1970, much of Eritrea has experienced famine conditions on several occasions, the result of drought and the disruption of war. Organizational and ideological differences produced splits and civil strife within the ELF, culminating in the late 1970s with the emergence of the Eritrean People’s Liberation Front (EPLF) as a disciplined and effective military challenge to the Ethiopian government. Following the Ethiopian revolution of 1974, its new regime continued attempts to defeat the EPLF militarily, now with Soviet and Cuban assistance. Nevertheless, Ethiopian forces controlled only the main urban centers, and from 1980 the EPLF increasingly gained the upper hand. In 1990 the EPLF captured Massawa, and in the following year it took control of Asmara. Accepted internationally as a provisional government, the EPLF agreed to hold a referendum on independence that was also approved by the new Ethiopian government. The referendum in April 1993 provided a virtually unanimous vote in favor of independence. On May 28, 1993, the United Nations formally admitted Eritrea to its membership.

Since independence Eritrea has frequently been at odds with neighboring Sudan. Shortly after independence Eritrea accused Sudan of supporting radical Islamic groups in Eritrea, and Sudan accused Eritrea of harboring Sudanese rebel groups. In late 1994 Eritrea claimed Sudan was training terrorists to overthrow the Eritrean government, while Sudan made the first of a series of accusations that Sudanese rebels, assisted by the Eritrean army, were invading Sudan from Eritrea. The two countries severed diplomatic relations in December 1994.

In mid-1998 clashes broke out between Eritrea and former ally Ethiopia along the countries’ border, each country accusing the other of seizing territory. Hundreds of thousands of Eritrean and Ethiopian troops were sent to the border, which had not been precisely delineated when Eritrea became independent from Ethiopia in 1993. By early 1999 the dispute had become a bitter war. Tens of thousands of soldiers were killed in the fighting before the countries declared a ceasefire in June 2000. In December Eritrea and Ethiopia signed a peace agreement that formally ended the war and established a commission to demarcate their border.