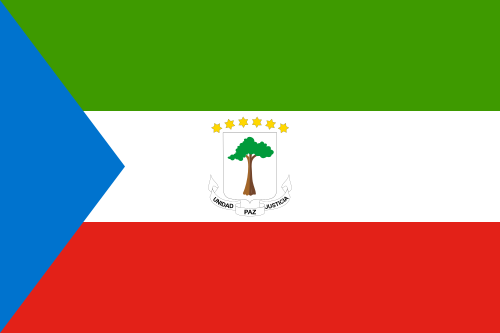 Equatorial Guinea, independent republic in western Africa, consisting of a mainland section called Mbini (formerly Río Muni) on the western coast and the coastal islets of Corisco, Elobey Grande, and Elobey Chico as well as the islands of Bioko (formerly Macías Nguema Biyogo and previously Fernando Póo), and Annobón (Pagalu) in the Gulf of Guinea. The total area of Equatorial Guinea is 28,051 sq km (10,831 sq mi).

LAND AND RESOURCES OF EQUATORIAL GUINEA

Mainland Equatorial Guinea is bounded on the north by Cameroon, on the east and south by Gabon, and on the west by the Gulf of Guinea. The terrain is gently rolling and heavily forested; about 60 percent of the area is drained by the Mbini (formerly Benito) River. With Corisco and the Elobeys islands it comprises the Mbini, or Continental, region, an area of 26,017 sq km (10,045 sq mi).

The main island of Equatorial Guinea is Bioko (2,020 sq km/779 sq mi), which is located off the western coast of Africa in the Bight of Biafra (Bonny). The island, primarily of volcanic origin, is mountainous and thickly wooded, with a steep, rocky coast. Its highest peak is Pico de Santa Isabel (3,008 m/9,869 ft). The island has fertile volcanic soils and is watered by several streams, and lakes are found in the mountains. Together with the small island of Annobón, lying about 640 km (about 400 mi) to the southwest, it comprises the Bioko, or Insular, region. The climate is tropical; the average annual temperature in Malabo is about 25°C (about 77°F) and the annual rainfall is more than 2,000 mm (more than 80 in). The wettest season is December through February.

About 63.5 percent (1995) of Equatorial Guinea’s land area is covered with forest and woodland. Deforestation has occurred, however, as agricultural production has increased. Water from taps cannot be drunk.

The population of Equatorial Guinea (2009 estimate) is 633,441, with many thousands more believed to be living abroad due to political conditions in the country. The overall population density is 23 persons per sq km (59 per sq mi). The population is composed almost entirely of black Africans. The Fang, indigenous to the mainland but now also living on Bioko Island, constitute more than 80 percent of the population. The Bubis, indigenous to Bioko Island, make up about 15 percent of the population. Several smaller ethnic groups live along the mainland coast. Spanish is the official language; however, Fang, a Bantu language, is the most widely spoken. About 86 percent of the people are members of the Roman Catholic Church, although traditional beliefs are also widely practiced. The capital, largest city, and principal port of Equatorial Guinea is Malabo, formerly Santa Isabel (population, 2003 estimate, 95,000), on the northern coast of Bioko; Bata (1983, 24,100) is the largest town on the mainland.

For years a poor, agricultural nation, Equatorial Guinea has grown more prosperous since the discovery of large offshore oil deposits in the early 1990s. From 1990 to 1990 the country’s gross domestic product (GDP), which measures the total value of goods and services produced, grew by an average of 3 percent every year. Equatorial Guinea’s oil wells produced 75.4 million barrels of crude petroleum in 2004. However, agriculture remains the main source of livelihood for most people.

The principal export crop of Equatorial Guinea is cacao, which is grown almost entirely on Bioko. Coffee is grown on the mainland, which also produces tropical hardwood timber, a leading export. Cassava and sweet potatoes are the staple foods. Local manufacturing industries include the processing of oil, soap, cocoa, yucca, coffee, and seafood. The currency is the CFA franc (479 CFA francs equal U.S.$1; 2007 average). An exchange rate of 50 CFA francs equal to 1 French franc was enforced from 1948 until 1994, when the CFA franc was devalued by 50 percent.

Under the 1982 constitution, Equatorial Guinea was a single-party state. This governmental party was named the Democratic Party of Equatorial Guinea in 1987. A new multiparty constitution was approved by public referendum in 1991. It established an 80-member House of Representatives to replace the existing 41-member legislature. Under the constitution, the voters elect a president to a seven-year term and legislators to five-year terms.

The island of Fernando Póo was sighted in 1471 by Fernão do Po, a Portuguese navigator. Portugal ceded the island to Spain in 1778. From 1827 to 1844, with the permission of the Spanish government, Britain maintained a naval station at Fernando Póo and also administered the island. In 1844 the Spanish settled in the area that became the province of Río Muni. In 1904 Fernando Póo and Río Muni were organized into the Western African Territories, later known as Spanish Guinea.

On October 12, 1968, the territory became the independent Republic of Equatorial Guinea, with Francisco Macías Nguema as president. In 1972 Macías Nguema appointed himself president for life. Extreme dictatorial and repressive policies led to the flight of an estimated 100,000 refugees to neighboring countries; at least 50,000 of those who remained were killed, and another 40,000 were sent into forced labor. In 1979 Macías Nguema was overthrown in a military coup, tried for treason, and executed. Lieutenant Colonel Teodoro Obiang Nguema Mbasogo, who led the coup, then became president.

Parliamentary elections, based on a single slate of candidates, were held in 1983 and 1988. In November 1993 the ruling Democratic Party of Equatorial Guinea won the country’s first multiparty elections, which were boycotted by at least half of the eligible voters. Opposition forces called for the boycott after the Obiang Nguema government refused to prepare an accurate electoral roll and guarantee the right to campaign without harassment. In February 1996 presidential elections Obiang Nguema, opposed by only one candidate, reportedly received more than 99 percent of the vote. International organizations condemned the elections because of the government’s harassment, jailing, and alleged torture of political opponents. March 1999 legislative elections, dominated by the ruling party, were also condemned as fraudulent. Obiang Nguema was reelected in December 2002, running unopposed after all opposition candidates dropped out in protest of electoral irregularities. In June 2004 Miguel Abia Biteo Borico became the country’s new prime minister.

In 2004 the president alleged there had been a coup attempt on him and a trial was held of those suspected of the act. The coup’s South African leader, Nick du Toit, was jailed for 34 years in November for his role, while the political opposition leader Severo Moto, in self-exile in Spain, received a 63-year sentence. Also seemingly involved in the coup attempt was Sir Mark Thatcher, son of the former British prime minister Margaret Thatcher. He received a suspended sentence, despite denying knowledge of the plot. The government resigned in August 2006; Prime Minister Biteo was replaced by Ricardo Mangue Obama Nfubea.