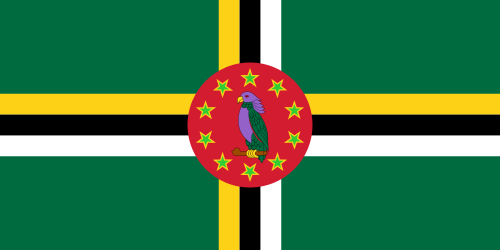 Dominica, island country in the West Indies, surrounded by the Caribbean Sea. Dominica is a mountainous island with rugged terrain, much of it covered by thick tropical rain forests. Its capital, major town, and port is Roseau.

Agriculture, chiefly growing bananas, is the mainstay of Dominica’s economy. Most of the people are descended from Africans brought to the island to work on banana plantations. Dominica has a rainy climate and its few beaches are small, so it attracts fewer tourists than other Caribbean islands. However its unspoiled rain forests, hot springs, and waterfalls offer many pleasures for hikers and nature-lovers. The coral reefs off the coast provide good opportunities for snorkeling and scuba diving.

Christopher Columbus sighted the island in 1493 and named it after the day of the week, Sunday, or Dominicus in Latin. England and France later competed for control of the island. Although England won out, French influence remains and most of the people speak a French-based creole language. A few thousand Carib Indians still live on the island.

LAND AND RESOURCES OF DOMINICA

One of the Windward Islands, Dominica is 47 km (29 mi) long and has an area of 750 sq km (289 sq mi). It lies approximately halfway between the islands of Guadeloupe (on the north) and Martinique (on the south).

Dominica is volcanic in origin and has a mountainous terrain. Several peaks rise above 1,220 m (4,000 ft). The mountains are still covered in virgin rain forest, much of which is protected as forest reserves or national parks. However, agricultural expansion and the timber industry threaten much of the country’s rain forest. The island’s highest point is Morne Diablotins (1,447 m/4,747 ft).

Rivers and Lakes in Dominica

Many rivers plunge down the steep mountainsides, creating many waterfalls. The highest lake is Boeri. Freshwater Lake provides a drinking water reservoir for Roseau, and a hydroelectric project is nearby. In the southern part of the island is Boiling Lake, an intermittently active geyser with a temperature of 92°C (198°C). Sulfurous gases that rise from Boiling Lake have destroyed the trees in a valley beyond, which is known as the Valley of Desolation because of the devastation to its forest.

The island has a tropical climate with an average annual temperature of about 27°C (about 80°F). The annual rainfall is considerable, ranging from about 1,780 mm (about 70 in) on the coast to more than three times that figure in the mountains. August is the wettest month, and the driest season occurs from February to June. The high annual rainfall contributes to the lushness of the forests.

Dominica is vulnerable to hurricanes and tropical storms, especially during the late summer months. According to the United Nations (UN) index that compares national income with the cost of damage caused by environmental disasters, Dominica is one of the most disaster-prone countries in the world.

Dominica is known as the Nature Island of the Caribbean and is a fine example of what volcanic islands in the east Caribbean looked like before the arrival of Europeans and plantation agriculture. The main resources of the island are timber, water (for hydropower), and fertile soil. Dominica has three national parks. The Morne Trois Pitons National Park was named a World Heritage Site by UNESCO in 1997.

PEOPLE AND CULTURE OF DOMINICA

Dominica has a total population of 72,660 (2009 estimate). Despite a high birthrate and a long life expectancy (74 years), the population of Dominica has grown slowly, owing to emigration to other islands of the Caribbean and to Great Britain. More than 90 percent of the inhabitants are black, descendants of people brought from Africa in the 18th century. A small number of Carib Indians also live on Dominica, descendents of the inhabitants of the island when Europeans first arrived.

English is the official language and is used mainly in government and commerce. Most of the people speak a French-based creole. Roman Catholicism is the predominant religion, but there are also several large Protestant communities, including Seventh-day Adventists, Pentecostals, and Methodists. Roseau (population, 2003 estimate, 27,000) is the capital and chief port.

Education is free and compulsory in Dominica from the ages of 5 to 15. The literacy rate for adults is 94 percent. The best-known writers to come from the island are Jean Rhys and Phyllis Shand Allfrey. Rhys spent most of her life in Europe and wrote little about Dominica. However, in the novel Wide Sargasso Sea (1966), Rhys used her knowledge of the West Indies to imagine the early life of Antoinette Cosway, the first wife of Mr. Rochester from Charlotte Bronte’s novel Jane Eyre. Allfrey devoted most of her time to the Dominica Labor Party and was a newspaper editor; her only published novel was The Orchid House (1953). See also Caribbean Literature.

The main festival on Dominica is Carnival, which takes place on the Monday and Tuesday before Ash Wednesday. It features street bands and masked and costumed dancers. A typical costume consists of layers of banana leaves or cloth, topped with a frightening mask with horns.

Dominica had a gross domestic product (GDP) of $248 million in 2002, or $3,440 per person. GDP is a measure of all the goods and services a country produces. The island’s fertile volcanic soils provide a good basis for farming, and Dominica continued to have an economy based on agriculture into the 1990s. The main export product is bananas, the quantity and value of which fluctuate according to the weather. Hurricanes periodically wipe out much of the crop.

Banana producers suffered with the opening of the European Union (EU) market in 1992, which has forced them to compete with U.S. producers that have large plantations on mainland Latin America. Banana prices fell on the world market, and farmers in the Windward Islands found it impossible to match the economies of scale of multinational corporations on the mainland. The EU in 1993 imposed quotas on banana imports that were favorable to Caribbean producers, but the United States challenged the quotas through the World Trade Organization (WTO). In 1999 the WTO ordered the EU to end preferential quotas.

Coconuts are also grown on Dominica and used primarily to make soap and cooking oil. Coconut-based toiletries now account for over 20 percent of the island’s exports. Other crops are being promoted to diversify the economy away from reliance on bananas. They include coffee, cacao, mangoes, citrus fruit, and root vegetables.

Pumice is quarried and exported on Dominica. Manufacturing is on a small scale and largely limited to the processing of farm products. The main manufactured goods are fruit juices, alcoholic beverages, soap, and essential oils. The island also has electronic assembly plants, data-processing companies, and garment manufacturers.

There are 30 members of the House of Assembly, 21 elected representatives and 9 appointed senators. The senators are usually nominated by the president, five on the advice of the prime minister and four on the advice of the leader of the opposition. However, the senators can also be elected, according to Dominica’s constitution. Every Dominican citizen over age 18 is entitled to vote.

Prior to the arrival of Europeans, the Arawak and Carib people inhabited Dominica. The Arawak, a peaceful people who lived in agricultural communities, were nearly eliminated by the Europeans, chiefly as a result of disease and enslavement. The more warlike Carib resisted the European settlers, and many more of them survived.

Dominica was sighted and named by Christopher Columbus on November 3, 1493. The island was soon contested by Spain, France, England, and the Caribs. In 1547 the king of Spain gave permission to the inhabitants of Puerto Rico to enslave the Caribs. By 1633 the French held part of Dominica, but in 1640 the Caribs pillaged every village on the island. For more than a century afterward the European powers gave up their attempts at settling Dominica.

In 1748 the Treaty of Aix-la-Chapelle reserved Dominica for the sole benefit of the Caribs, but French traders, with Caribs as their allies, began to establish small trading stations and plantations using African slaves on the leeward coast. Then the Caribs attacked the French and were repulsed, and the British attacked the French under pretense of protecting the Caribs.

Britain gained control of the island under the Treaty of Paris in 1763. The British divided Dominica into blocks and gave a reservation in one block of poor land to the Caribs. The other blocks were sold in London, but purchasers could not assume ownership because Caribs fought them, with the aid of runaway slaves.

In 1778 the French successfully invaded Dominica while the British were fighting the American Revolutionary War. The Treaty of Paris of 1783, which ended the war, returned the island to British control. The French were unable to reconquer it despite attempts at invasion in 1795 and 1805. England abolished slavery in 1834, and Dominica subsequently became the only British Caribbean colony in the 19th century to elect a black majority to its legislature. The local government’s policies, however, hurt the interests of the British landowners who successfully lobbied the British government in 1865 to replace the legislature with an assembly dominated by appointed members.

Under British rule, Dominica became part of the Leeward Islands dependency in 1833 and was attached to the Windward Islands group in 1940. In 1967 it became an internally self-governing state associated with Britain.

Dominica attained full independence on November 3, 1978, and subsequently joined the Commonwealth of Nations and the United Nations. The republic’s first prime minister was Patrick R. John of the Democratic Labour Party (DLP). This party had led Dominica to independence, but its government was not popular and was forced to resign in 1979. Also that year a severe hurricane struck the island nation, causing widespread damage.

In 1980 the Dominica Freedom Party (DFP) and its leader, Mary Eugenia Charles, won a decisive victory. Charles, the first woman prime minister in the Caribbean, remained in office for 15 years and led the DFP to election victories in 1985 and 1990. During her terms in office she distributed land to small farmers and spurred diversification of the economy. She resisted several coup attempts, cooperated closely with the United States on policies such as the invasion of Grenada in 1983, and sought closer economic and political ties with Dominica’s island neighbors. Charles retired in 1995.

The United Workers’ Party (UWP), formed in 1988, won the 1995 elections, and its leader, Edison James, became prime minister. The James administration stated its commitment to a proposal that Dominica and three other Windward Islands form a political and economic union. But hurricane damage and trouble in the banana industry weakened support for the UWP.

Following elections in 2000 the DLP and the DFP formed a governing coalition. Roosevelt “Rosie” Douglas of the DLP became prime minister. His stated aims were to diversify the country’s economy further and to gain an associate membership in the EU for Dominica. But Douglas died after several months in office. Pierre Charles, minister for communications and works, succeeded Douglas. In 2004 Charles died and was replaced by Roosevelt Skerrit, the 31-year-old minister of education. Skerrit faced the challenge of improving Dominica’s struggling economy. Skerrit and his party won the 2005 elections.