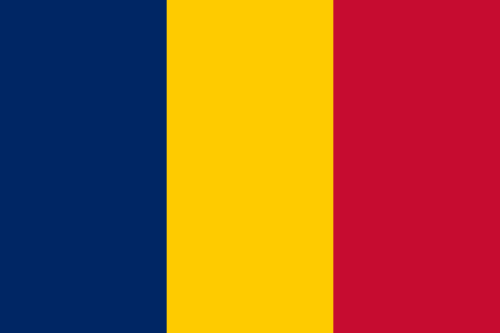 Chad, republic in north central Africa. Chad is bounded on the north by Libya; on the east by Sudan; on the south by the Central African Republic; and on the west by Cameroon, Nigeria, and Niger. The landlocked country has an area of 1,284,000 sq km (495,755 sq mi). N’Djamena is the capital and largest city.

LAND AND RESOURCES OF CHAD

Chad’s terrain is dominated by the low-lying Chad Basin (elevation about 250 m/820 ft), which rises gradually to mountains and plateaus on the north, east, and south. In the east heights of more than 900 m (more than 3,000 ft) are attained in the Ennedi and Ouaddaï plateaus. The greatest elevations are reached in the Tibesti massif in the north, with a maximum height of 3,415 m (11,204 ft) at Emi Koussi. The northern half of the republic lies in the Sahara. The only important rivers, the Logone and Chari (Shari), are located in the southwest and flow into Lake Chad. The lake doubles in size during the rainy season.

The northern portion of Chad is hot and arid. The central section has three seasons: hot from March to July; rainy from July to October, with rainfall averaging from about 250 to 750 mm (about 10 to 30 in); and cool during the remaining months. The southern section has similar seasons but receives about 1,145 mm (about 45 in) of rain in the same four months.

Although only 3 percent of Chad’s land is cultivated, the country’s agricultural resources have long held primary importance in food production. Extensive fish resources in Lake Chad and the Chari River are also of vital importance. Southern Chad contains significant deposits of petroleum and gold that have begun to be exploited since 2000. Natron (a sodium carbonate that occurs naturally in lake beds) has been extracted from the shores of Lake Chad for centuries for use as salt and for the production of soap and glass. The country also contains largely untapped deposits of uranium, tungsten, tin, bauxite, iron ore, and titanium.

The population of Chad consists of numerous ethnic groups. Arab peoples are important in the north and east, and black African peoples dominate in the south.

The estimated population of Chad in 2007 was 10,238,807. The overall population density is 8 persons per sq km (21 per sq mi). Some 74 percent of the people live in rural areas, and most of the population is concentrated in the south. The population may be divided into two main groups: a Muslim population in the northern and eastern portions of the country and the non-Muslims of black African origin in the southern regions. The Muslim population includes both nomadic Arabs and sedentary non-Arab peoples. The largest group among the non-Muslims is the Sara tribe. Chad culture draws most heavily on the ethnic heritage of its black peoples, but Islamic and French influences are much in evidence.

Chad is divided into 14 prefectures. N’Djamena (formerly Fort-Lamy), is the capital and largest city. Other important cities include Sarh, formerly Fort-Archambault, Moundou, and Abéché.

Language and Religion in Chad

The official languages of Chad are French and Arabic, but numerous African languages are spoken. Chadic languages, especially Hausa, are spoken in the Lake Chad area. Muslims make up about 59 percent of the population. About 17 percent of the people are Christians. Most of the remaining population adheres to traditional religions.

In 2000 Chad had a literacy rate of 54 percent. School attendance in the 2000 school year was 984,224 primary and 123,408 secondary students. During this period there were 4,028 primary schools. In the mid-1990s about 3,000 people attended institutions of higher education, including the country’s one university, the University of Chad (founded in 1971).

The economy of Chad is based largely on subsistence agriculture; some 83 percent of the labor force is engaged in farming, animal husbandry, forestry, and fishing. In 1992 national budget figures showed revenues of $120 million and expenditures of $363 million. Chad’s economic prospects have been boosted by the development of oil wells since 2000 and the 2003 completion of a 1,000-km-long (600-mi-long) oil pipeline through Cameroon to the Atlantic coast.

Cotton and livestock are the most important agricultural products of Chad, accounting for about 70 percent of earnings. Production in 2005 was 233,000 metric tons of cotton. The rice crop is becoming increasingly important. Millet, potatoes, squash, beans, peanuts, and other vegetables are grown for local consumption. Livestock raising is important in the central region and in areas of the north. In 2005 the country’s livestock population included 6.5 million head of cattle, 2.6 million sheep, 5.8 million goats, 740,000 camels, and 275,000 horses. About one-third of the land is used for grazing.

The processing of cotton and cottonseed oil and the manufacturing of peanut oil are major industries in Chad. Modern meatpacking plants have been established in N’Djamena and Sarh. The fishing industry furnishes fresh, dried, and smoked fish for domestic use and export. Petroleum mining and processing are increasingly important industries in Chad. Gold and natron, a mineral used to make soap, glass, paper, and medicines, are also mined. Forestry is important in the south. The output of electricity in 2003 was 120 million kilowatt-hours.

Transportation and Communications in Chad

Of a road network of 33,400 km (20,754 mi), only about one-quarter are all-weather. Chad has no railroads. The main airport at N’Djamena can accommodate large jets, and about 55 other airports serve smaller craft. The radio station in N’Djamena is government-owned and broadcasts programs in French, Arabic, and eight African languages. In 1997 there were an average 236 radio receivers and 1.4 television sets for every 1,000 inhabitants.

Political instability plagued Chad throughout the 1970s and 1980s. In 1989 a new constitution providing for an elected president and parliament came into effect. This constitution was suspended, and parliament dissolved, after an insurgent group, the Patriotic Salvation Movement, took power in December 1990. Chad was then ruled by an interim government consisting of a 33-member state council headed by a president. After internal pressure for elections mounted, a democratic constitution was approved by public referendum in March 1996. Under this (subsequently amended) constitution, the head of state is the president, who is popularly elected to a five-year term. A popularly elected, 155-seat National Assembly serves as the country’s legislature. Its members serve four-year terms. The constitution also allows for the optional creation of a popularly elected Senate to serve as the upper house of the legislature.

In 2004 Chad maintained an army of 25,000 members and an air force of 350. The country has signed defense agreements with France, which gives Chad’s army technical and other aid.

Cave paintings indicate that Chad was a fertile and populous country in ancient times. By the 9th century AD, the kingdom of Kanem (see Kanem-Bornu Empire) was established in what is now western Chad, with its capital at Njimi, near Mao. Its rulers adopted Islam in the 11th century. Kanem was subjected to neighboring Bornu in the 16th century, and in the succeeding period the chief powers were the sultanates of Baguirmi and Wadai in the south. The export of slaves to North Africa was an important sector of the economy of these states.

In the late 19th century the area was subdued by the Sudanese conqueror Rabih al-Zubayr, and it was taken over by the French on his death. In 1910 Chad became a part of the French Equatorial Federation, with headquarters in Brazzaville, the Republic of the Congo, about 2,400 km (about 1,500 mi) away. The change to colonial status resulted in little interference in the way of life of the indigenous peoples and little development beyond the establishment of cotton plantations in the south.

In 1960 Chad, like other French colonies in Africa, became independent. Desperately poor, the governments of President François Tombalbaye, a southerner, were supported by French aid. The dissatisfaction of northern Muslims first surfaced in 1963 and forced some changes in the Bantu-dominated one-party government. This, however, was not enough to satisfy them, and in 1969 Muslim guerrillas began to operate in the north. With support from neighboring Libya, their attacks escalated during the following years. Despite military aid from France, Tombalbaye’s situation was made totally untenable by the drought of the early 1970s. He was assassinated in 1975.

Tombalbaye’s successor, General Félix Malloum, was not able to end the civil strife. By 1979 the war had engulfed the south, Malloum was overthrown, and a northerner, Goukouni Oueddei, emerged as president. In 1980 Libya intervened to support Oueddei against rebels under former defense minister Hissène Habré, who was backed by Sudan and Egypt. After the Libyan forces withdrew late in 1981 at Oueddei’s request, Habré renewed his offensive, and his troops captured N’Djamena in June 1982. In 1983 the ousted Oueddei formed a rival government in the north. In the continued civil strife, Oueddei had the backing of Libyan troops, while France sent troops and supplies to keep Habré in power. By the end of 1988, Libyan forces had been driven out of Chad, and the two nations had normalized diplomatic relations. In December 1990, however, Habré was ousted by an insurgent group, the Patriotic Salvation Movement, which had Libyan support. The rebel leader, General Idriss Deby, then assumed the presidency. In January 1992 the Deby government claimed to have crushed a rebellion by forces loyal to Habré, and France sent more troops as a safeguard. In the early 1990s Chad continued to suffer from widespread political and ethnic unrest, including the massacre of 82 civilians by President Deby’s private guard in August 1993.

In 1994, however, the government reached a cease-fire agreement with the rebel group Comité de Sursaut National pour la Paix et la Démocratie (CSNPD); the CSNPD committed to withdraw troops from southern Chad, and the government agreed to appoint members of the CSNPD to the national army. In addition, a 20-year territorial dispute with Libya came to an end when the International Court of Justice ruled that Chad had sovereignty over the Aozou Strip, a stretch of land along the Libyan border covering about 115,000 sq km (45,000 sq mi). In June and July 1996, under a new, democratic constitution, Deby was popularly elected president in the nation’s first presidential elections. Deby was reelected in May 2001.