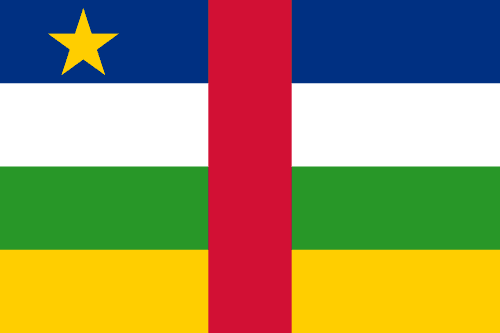 Central African Republic, republic in central Africa, bordered on the north by Chad, on the east by Sudan, on the south by the Democratic Republic of the Congo (DRC, formerly Zaire) and the Republic of the Congo, and on the west by Cameroon. The landlocked nation has an area of 622,436 sq km (240,324 sq mi). Bangui is the capital and largest city.

The Central African Republic is situated on the northern edge of the Congo River Basin. Most of the land is a plateau that ranges in elevation from about 610 to 790 m (about 2,000 to 2,600 ft). Two ranges of hills in the north and northeast rise to maximum heights of about 1,400 m (about 4,600 ft). Most of the country has a savanna vegetation—a grassland interspersed with trees. Open grassland is found in the extreme north, and a dense rain forest covers the major part of the southwestern area. The country is drained by several major rivers, the Bamingui and Ouham rivers in the north, and the Ubangi, a tributary of the Congo, in the south.

The climate of the Central African Republic is hot and humid; the average annual temperature is about 26°C (about 79°F). Tornadoes and floods are common at the onset of the rainy season, which lasts from June to November. Annual rainfall varies from about 1,800 mm (about 70 in) in the Ubangi River valley to about 200 mm (about 8 in) in the semiarid north.

The mineral resources of this primarily agricultural country are relatively undeveloped. Diamonds are the dominant exploited mineral. Deposits of uranium exist, as well as iron ore, gold, lime, zinc, copper, and tin. Commercially valuable trees include the sapele mahogany and the obeche. Almost every animal of the African Tropics is found in the country.

About 37 percent (2005) of the Central African Republic’s total land area is wooded, and the country is considered to be one of the last great refuges of the African elephant. About 15.7 percent (2007) of the country is protected, but despite government efforts to set up and police the reserves, poaching is still a problem. Tap water cannot be drunk. The government has signed international agreements pertaining to endangered species and ozone layer protection.

The main ethnic groups of the Central African Republic are the Baya, Banda, Sara, Mandjia, Mboum, and M’Baka. About 49 percent of the population inhabits small villages, living and working according to traditional customs.

While officially compulsory, only 46 percent of the eligible children of the Central African Republic receive primary education. Secondary and higher education facilities are limited, with only 10 percent of secondary school-aged children enrolled. The country’s one university, the University of Bangui (1970), has an enrollment of about 2,900 students. Only 53.9 percent of the population is literate.

The Central African Republic is one of the most underdeveloped areas in Africa. Growth of the export economy is hindered by the difficulty of transporting goods to a seaport. Some 80 percent of the population earns its livelihood by farming, fishing, or working in forestry. The agricultural output is fairly evenly balanced between subsistence and export crops. The principal sources of revenue are diamonds, coffee, tobacco, cotton, and timber exports.

Only 3 percent of the total land area is used for growing crops. Basic food crops include cassava, plantains, corn, peanuts, sweet potatoes, and millet. In order to increase the wage-earning power of the peasant farmer, the government has organized agricultural cooperatives, placing primary emphasis on introducing new crops that are expected to produce a higher income. The cultivation of tobacco, sesame, and rice is encouraged by the government. The most important cash crop is coffee, once grown mostly on European-owned plantations, but now produced largely on smaller African-owned farms. In 2007 coffee production was 2,400 metric tons. Cotton, which is widely cultivated, is also a leading cash crop and represents a significant portion of export earnings.

Exploitation of forest reserves was slow to develop but has increased in importance. In 2007 some 2.8 million cu m (100 million cu ft) of roundwood were produced. Timber accounted for 8 percent of export revenues in the early 1990s.

Manufacturing activity in the Central African Republic is very limited. Products include cottonseed, peanut, and sesame oils; textiles; leather goods; tobacco products; soap; flour; bricks; and paint. The output of electricity in 2006 was 110 million kilowatt-hours, 77.27 percent of which was generated in hydroelectric installations. Gem diamonds account for nearly all the country’s mineral output and two-thirds of its export revenue. Production was 250,000 carats in 2004. Uranium was discovered in the eastern part of the country in 1966, but production is awaiting improvement in international prices. A small amount of gold is mined, mostly by individual prospectors.

The country’s principal exports are diamonds, timber, cotton, and coffee. France and Belgium are by far the leading trade partners, and some commerce is also carried on with the nearby nations of Cameroon, the Congo, and Gabon, with which the Central African Republic is joined in the Customs and Economic Union of Central Africa. In 2007 exports earned $195 million while imports cost $228 million.

The country has no railroads. The Ubangi River and the Chari and Logone river systems are important arteries of transportation. Exports are shipped on the Ubangi and Congo rivers to Brazzaville, Congo, and then by rail to the seaport of Pointe-Noire. The country has 23,810 km (14,795 mi) of roads, only a small portion of which are paved. An international airport is located at Bangui.

Several periodicals and 3 daily newspaper are published in Bangui. The national radio and television broadcasting service is government owned and provides programs in French and Sango. In 1997 there were 83 radio receivers, 6 television sets, and 3 telephone mainlines in use for every 1,000 inhabitants.

Prior to a military coup in 2003, the Central African Republic was governed under a 1994 constitution that provided for a multiparty democracy. Under this constitution, executive authority was vested in a president and the Council of Ministers, which was headed by the president. The president was popularly elected to a six-year term and could serve a maximum of two consecutive terms. Legislative authority was held by a 109-member National Assembly; members of the assembly were popularly elected to five-year terms. The Central African Democratic Rally is the country’s leading political party. The leaders of the 2003 coup suspended the constitution, dissolved the National Assembly, and formed a transitional government. A civilian government was restored in 2005 when presidential elections were held.

Most of the ethnic groups inhabiting the present-day Central African Republic entered the region in the 19th century to escape Fulani armies or to avoid slave traders operating in the Congo River Basin and modern Sudan. In the 1880s the French annexed the area, and in 1894 it was organized as the territory of Ubangi-Chari. In 1910 the dependency became part of the Federation of French Equatorial Africa. Economic development was dominated by European concessionaires. This system led to abuses of the black Africans, who staged several violent protests, notably between 1928 and 1930.

From 1946 to 1958 the territory had its own elected legislature and was represented in the French National Assembly. In 1958 the dependency gained autonomy as the Central African Republic; it became fully independent on August 13, 1960, with David Dacko as president. In 1966, charging Dacko’s government with corruption, his cousin, army chief Colonel Jean-Bédel Bokassa, seized power. He abrogated the constitution and established an authoritarian regime. In late 1976 a new constitution was issued, reorganizing the nation as the Central African Empire. Bokassa became Emperor Bokassa I; he was crowned in a lavish ceremony in December 1977.

Bokassa’s regime began to fall apart in January 1979, when an order that schoolchildren wear expensive uniforms made in his own factory prompted widespread protest demonstrations. The army was called in, and many children were put in prison, where they were massacred by the imperial guard. A committee of African judges later concluded that Bokassa had personally participated in the killings. In September 1979 he was overthrown in a French-backed coup led by former president Dacko, who then resumed power.

Bokassa went into exile, and Dacko was confirmed in office by the electorate in March 1981. He was deposed six months later in a coup led by the army commander, General André Kolingba. Bokassa returned to the country in October 1986 and was tried and convicted for ordering the murders of political opponents while he was in power. In November Kolingba was confirmed by popular referendum for a six-year term as head of state.

Multiparty presidential and legislative elections, held in October 1992, were annulled by the republic’s supreme court, which cited widespread irregularities. Elections were held again in September 1993, and Ange-Félix Patassé was elected president. One of the last acts of his predecessor, General Kolingba, was to grant amnesty and an immediate release from prison to Bokassa.

During the mid-1990s Patassé’s presidency was plagued by unrest within the military. In late May 1996 approximately 200 Central African Republic soldiers mutinied in Bangui, demanding back pay for themselves and other government employees and the resignation of President Patassé. French troops stationed in the country put down the mutiny, but not before Bangui was heavily looted and at least 50 people were killed.

Soldiers rose up again in November, and then again in 1997, battling French forces in retaliation for the killings of several mutineers by the French or the police. In July 1997 the mutineers agreed to a truce, receiving amnesty and reintegration into the army in return. Soon thereafter France began withdrawing its military forces from the Central African Republic. By April 1998 France had shut down its military base in Bouar and had removed virtually all of its troops from the country.

Patassé was reelected in the 1999 presidential election, which the opposition claimed was rigged. In 2001 and 2002 the government weathered several army rebellions and attempted coups. Patassé survived these challenges to his authority with military assistance from Libya and rebel forces from the neighboring DRC. In March 2003, while he attended a conference in Niger, Patassé’s government was overthrown by former army chief François Bozizé. Bozizé appointed himself president and assembled a transitional government.

A democratic government was restored in 2005 when presidential elections were held. In the first round of voting in March, none of the candidates won a majority, necessitating a runoff between the two leading candidates, Bozizé and Martin Ziguele, who was prime minister under Patassé. In the May runoff Bozizé was elected president with about 64 percent of the vote.