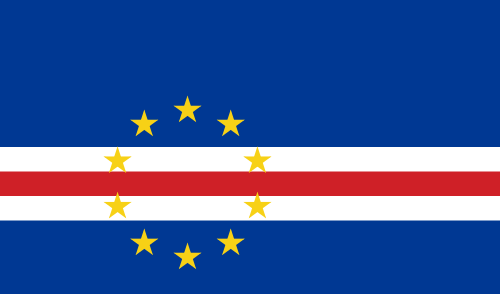 Cape Verde, republic comprising the Cape Verde Islands, in the Atlantic Ocean, due west of the westernmost point of Africa, Cape Verde. The archipelago consists of ten islands and five islets, which are divided into windward and leeward groups. The windward, or Barlavento, group on the north includes Santo Antão, São Vicente, São Nicolau, Santa Luzia, Sal, and Boa Vista; the leeward, or Sotavento, group on the south includes São Tiago, Brava, Fogo, and Maio. Cape Verde has a total area of 4,033 sq km (1,557 sq mi).

LAND AND RESOURCES OF CAPE VERDE

The islands are volcanic in origin, and all but three—Sal, Boa Vista, and Maio—are mountainous. The highest point, Pico do Cano (2,829 m/9,281 ft) on Fogo, is also the group’s only active volcano. The climate is tropical and dry, showing little variation throughout the year. The average temperature in Praia, the capital, ranges from 20° to 25°C (68° to 77°F) in January and 24° to 28°C (75° to 83°F) in July. Winds are frequent, occasionally carrying clouds of sand from the Sahara Desert in Africa to the east. Precipitation is slight and irregular. Average precipitation in Praia is 260 mm (10 in), nearly all of which falls from August through September. Vegetation is sparse and consists of various shrubs, aloes, and other drought-resistant species. Wildlife is also limited and includes lizards, monkeys, wild goats, and a variety of birdlife. Mineral resources are meager and primarily include pozzolana (a volcanic rock used in making cement) and salt.

Prolonged droughts are an increasing problem for the small, rocky archipelago, which has no renewable sources of fresh water. Only 80 percent (2004) of Cape Verde residents have access to safe water, and only 43 percent (2004) have access to sanitation. Overgrazing of livestock, improper land use, and high demand for fuelwood are added concerns. Reforestation projects are being initiated to retain runoff, but additional outside aid may be necessary to implement these projects effectively. Only 12.2 percent (2003) of Cape Verde’s total land area is arable, and 20.8 percent (2005) is forested. None of Cape Verde’s land is classified as protected. Environmental damage threatens several indigenous species of birds and reptiles. Cape Verde is a party to international agreements regarding biodiversity, climate change, desertification, environmental modification, law of the sea, and marine dumping.

More than two-thirds of the people of Cape Verde are of mixed African and European ancestry and are known as Creoles, or mestiços. Nearly all of the remainder are of African ancestry. The official language is Portuguese; the national language, however, is Crioulo, a Creole dialect of archaic Portuguese incorporating many African elements. Roman Catholicism is the dominant religion. Some 84 percent of the population is literate.

The census of 1990 counted a population of 341,491; the estimated population in 2009 was 429,474, giving the country an overall density of 107 persons per sq km (276 per sq mi). Because Cape Verde is poor in natural resources and suffers from frequent droughts, it has experienced large emigration for many years. More people with a Cape Verde ancestry live outside the country than inside. The population growth rate in 2009 was 0.6 percent annually. Life expectancy at birth was 75 years for women and 68 years for men. The principal urban centers are Praia (population, 2003 estimate, 107,000), on São Tiago, and Mindelo (2000; 62,970) on São Vicente.

Although limited by scarce arable land and diminished by regular drought, agriculture remains an important economic activity. Staple crops include maize and beans; also cultivated are sweet potatoes, coconuts, potatoes, cassava, and dates. Some bananas are grown for export, and sugarcane is raised for the making of rum. Because of its mountainous terrain, only 11.4 percent of the islands’ area is cultivated. Subdivision of farms from generation to generation has reduced many farms to a size smaller than needed for subsistence, and Cape Verde depends on food imports (much of it in the form of aid) to feed its people.

Cape Verde is located in the midst of rich fishing grounds, although the industry has yet to develop to its potential. Fish-processing facilities have been constructed in Mindelo, and the government has initiated programs to modernize the fishing fleet. The catch in 2007 was 9,673 metric tons; the catch is usually composed chiefly of skipjack and yellowfin tuna and wahoo, a type of large mackerel. Some lobsters are caught for export.

Salt is mined on Sal, Boa Vista, and Maio, with annual production of about 7,000 metric tons. Production has declined to less than one-quarter of the level achieved in the 1970s, depressed by the lack of steady markets and readily available ocean transportation, as well as the cost of repairs to equipment. Pozzolana is extracted for export.

Gross domestic product (GDP) of Cape Verde was $1,434 million in 2007, or just $2,705 per person. The bulk of exports, valued at $19 million in 2007, are purchased by Portugal, followed by the United Kingdom, Spain, France, Germany, and The Netherlands. Imports, worth $740 million, come principally from Portugal, France, and Japan. The economy depends extensively on remittances from Cape Verdeans living overseas, which help to offset the country’s large trade deficit. The country’s basic unit of currency is the Cape Verde escudo (80.60 escudos equal U.S.$1; 2007 average); 1,000 escudos is known as a conto.

Cape Verde is attempting to capitalize on its strategic location at the crossroads of mid-Atlantic air and sea lanes by expanding, with the assistance of foreign aid, airports, and port facilities. Main ports are at Mindelo and Praia. The international airport at Espargos, on Sal, is a refueling stop for flights to Africa and South America. A second international airport opened in Praia in 2005. With unspoiled beaches and a sunny climate, the government has identified tourism as the primary focus of development, although the number of visitors in 2007 was only 267,000.

A new constitution promulgated in 1992 affirmed Cape Verde as a multiparty democracy, expanding on reforms begun in 1990 that introduced free and popular elections for president and parliament. Legislative power is held by the 79-member National Assembly; members are elected by the voters to five-year terms. The head of state is the president, who is also elected to a five-year term. A prime minister holds executive power and is nominated by the assembly and appointed by the president. The largest political parties are the African Party for the Independence of Cape Verde (PAICV) and the Movement for Democracy (MPD).

The islands were used by Senegalese fishers before the first Europeans arrived, about 1456. They were claimed by Portugal in 1460; Portuguese settlers began to land shortly afterward. In 1495 the archipelago was declared a crown possession of Portugal, and slaves were subsequently imported from the African continent to cultivate the land. After gaining prosperity, the islands became attractive to pirates and foreign raiders—English, Dutch, and French—who repeatedly attacked during the following centuries. When the slave trade (for which the islands had served as a port of call) was abolished in 1876, their importance dwindled, although a coaling station and a submarine cable station at Mindelo still attracted many ships until World War I. Trade increased again toward the middle of the 20th century.

In an attempt to avert growing nationalism, Portugal in 1951 designated its African colonies, including Cape Verde, as overseas provinces. The provincial status gave Cape Verdeans access to higher education, but lack of job opportunities and poverty in the islands forced many of the educated to take administrative jobs on the African mainland. There they began to participate in growing nationalist movements. Amílcar Cabral, a Cape Verdean, cofounded the African Party for the Independence of Guinea and Cape Verde (known by its Portuguese acronym PAIGC) in 1956 in Portuguese Guinea (now Guinea-Bissau). The party initiated an armed rebellion against Portugal in the early 1960s. For logistical reasons, the rebels did not attempt to disrupt Portugal’s control of Cape Verde, which was used as a garrison for Portuguese troops fighting on the mainland. However, desire for independence among Cape Verdeans remained strong and many residents of the islands went to the mainland to join the rebellion.

A revolution in Portugal in 1974 sparked mass mobilizations in Cape Verde, which prompted the new Portuguese government to negotiate with the PAIGC. Talks culminated in independence for Cape Verde on July 5, 1975, ending five centuries of Portuguese rule. Although the original constitution envisioned eventual unification with Guinea-Bissau, a coup in that country in 1980 resulted in strained relations and the dropping of plans for unity.

In 1981 the PAIGC was dissolved and replaced by the African Party for the Independence of Cape Verde (PAICV). A 1981 constitution made the PAICV the country’s sole political party. Under its first president, Aristides Pereira, Cape Verde was nonaligned in foreign policy but heavily dependent on Western aid. Under pressure from church and academic circles, reforms enacted in 1990 provided for the country’s first free presidential election, won by Antonio Mascarenhas Monteiro in 1991. A new constitution enshrining the new multiparty system was adopted in 1992. Mascarenhas, running uncontested, was reelected in February 1996 and his party, Movement for Democracy (MPD), won a landslide victory in legislative elections.