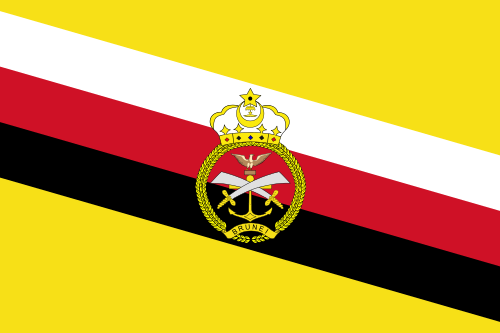 Brunei, in full Kingdom of Brunei, Abode of Peace (Malay, Negara Brunei Darussalam), Islamic sultanate located on the northern coast of the island of Borneo, in Southeast Asia. It is bounded on the north by the South China Sea, and on all other sides by Malaysia. Brunei’s petroleum reserves have made the small nation very wealthy. It was the only state in the region that chose to remain a British dependency in the early 1960s, finally becoming an independent nation in 1984.

Brunei consists of two lobes of territory, a larger western one and a smaller eastern one. Each part has a seafront but is otherwise enclosed by the Malaysian state of Sarawak. The total area of Brunei is 5,765 sq km (2,226 sq mi).

LAND AND RESOURCES OF BRUNEI

The terrain of Brunei consists of a narrow coastal plain and a hilly interior. There are extensive swamps, especially in the west and northeast. Most streams flow north to the coast, including the Belait River, the longest in the country. Brunei has a humid, tropical climate, with an average annual temperature of about 27°C (about 80°F). The annual rainfall is heavy and is concentrated in the monsoon season of November to March, but there is no dry season.

Dense tropical rain forests cover much of the interior, occupying 48 percent of the country’s total area. Brunei is rich in wildlife, including monkeys and diverse birds and reptiles. Petroleum and natural gas are the primary mineral resources. Some species are threatened, but considerable revenue from oil sales has kept the pressure off of Brunei’s forests. Nearly 38.3 percent (2007) of the land area is now protected, and the country has ratified the Convention on International Trade in Endangered Species of Wild Fauna and Flora.

POPULATION AND EDUCATION OF BRUNEI

About two-thirds of the population of Brunei is Malay (see Malayan Peoples). Minorities include Chinese, Indians, and various indigenous peoples, such as Dayaks and Belaits. The official language is Malay, but English is also used for official purposes. Islam is the state religion, and the majority of the people are Muslims. Brunei’s 2009 estimated population was 388,190, yielding an overall population density of 74 persons per sq km (191 per sq mi). The capital and chief town is Bandar Seri Begawan.

Medical and educational services are relatively well developed and are largely financed by revenues from petroleum production. Education is compulsory for children aged 6 to 15 years and it is free at all levels. Primary and secondary education is provided in Malay, English, or Chinese. The University of Brunei Darussalam (1985) is located in Bandar Seri Begawan. There are also vocational schools and a teacher-training institution. In addition, the government pays the tuition of Brunei students who study at overseas universities.

The economy of Brunei is overwhelmingly dependent on the production of petroleum and natural gas. Oil fields were first discovered in 1929 at Seria, in western Brunei, but production has since expanded to offshore fields. Crude oil output in 2004 was 62 million barrels. The Brunei Investment Agency (BIA) is responsible for investing petroleum and natural gas profits and represents another important source of national revenue. Of minor importance to the economy is the production of textiles and rubber. Local production of fish and rice does not meet national needs. Exploitation of the country’s forest reserves is increasing.

The country has 1,150 km (715 mi) of roads, mostly along the coast. Rivers form the principal network of transportation into the interior. The chief ports are Bandar Seri Begawan, Kuala Belait, and Muara. Royal Brunei Airlines, the state-owned carrier, provides service to a number of international destinations.

Brunei’s unit of currency is the Brunei dollar (1.50 Brunei dollars equal U.S.$1; 2007 average). The gross domestic product (GDP) of $30,269.70 per capita in 2006 was among the world’s highest, although much of this wealth is concentrated in relatively few hands.

Brunei is a sultanate governed under a constitution promulgated in 1959, and amended in 1984 when Brunei achieved independence. Under the constitution, executive authority is held by the sultan of Brunei, a hereditary position. Advised by a Council of Ministers, the sultan has ruled by decree since 1962. The constitution calls for a Legislative Council to review legislation, but Brunei went without this body from 1984 until 2004. Brunei is a member of the United Nations (UN), the Commonwealth of Nations, and the Association of Southeast Asian Nations (ASEAN).

Likely settled by the 8th century, Brunei became a dependency of the Javanese kingdom of Majapahit in the 14th century. An independent Islamic sultanate was established in the 15th century as Majapahit broke apart. By the 16th century the sultan of Brunei controlled most of Borneo’s north coast and some parts of the Sulu Archipelago in the Philippines. Brunei’s wealth was based on trade, notably with China and, after a 1521 visit by Spanish navigator Juan Sebastián del Cano, with European merchants.

The Brunei sultanate maintained its territorial expanse until the 19th century, when it began tottering under the combined attack of pirates from without and enemies within. In 1841 the sultan of Brunei, Omar Ali Saifuddin II, granted much of the territory of Sarawak to British army officer James Brooke in gratitude for aid in putting down an insurrection in the southwest. Brooke assumed the title of raja, and periodically thereafter the dynasty of the “white rajas” secured further territory from Brunei until Sarawak surrounded it, and Brunei was reduced to its present size.

In about 1849 the British, seeking to protect commerce between Singapore and northwest Borneo, started operations against the pirate fleets and destroyed them within five years. In 1888 Brunei became a British protectorate. In 1906 the administration of the sultanate of Brunei was placed in the hands of a British resident, although the sultan remained in nominal authority. In 1959 the sultan, Omar Ali Saifuddin III, promulgated the first written constitution. Invited to join the Federation of Malaysia in 1963, Brunei was the only Malay state that elected to remain a British dependency. In January 1979, the British government signed a new treaty with the sultan, Muda Hassanal Bolkiah, and Brunei became an independent sovereign country on January 1, 1984.

Muda espoused a state ideology called Malay Islamic Monarchy, which emphasized the uniqueness of Brunei’s Islamic culture and presented the sultan as the defender of the faith in Brunei. In August 1998 Muda confirmed his son as his eventual successor. In 2004 the sultan reappointed a Legislative Council to review legislation, viewed as a move toward greater democracy.