INTRODUCTION OF ANTIGUA AND BARBUDA 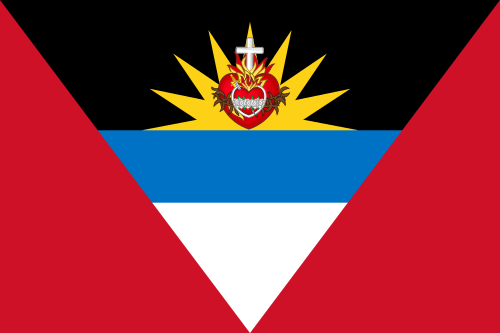 Antigua and Barbuda, an independent island nation located on the eastern edge of the Caribbean Sea. The country comprises three main islands—Antigua, Barbuda, and Redonda.

Antigua and Barbuda is one of the more prosperous of the Caribbean nations. The islands attract hundreds of thousands of tourists each year, and the nation’s economy is dependent on tourism. Antigua’s beaches are noted for their beauty. Cruise ships sailing the southern Caribbean often dock at the island. Numerous coral reefs and sunken ships surround Barbuda and Antigua, making for great snorkeling and diving.

Europeans first visited the islands when Christopher Columbus landed in 1493 on his second voyage to the Americas. Antigua and Barbuda were British colonies from 1632 until they achieved independence in 1981. The majority of the population is descended from African slaves brought to the islands to work on cotton and sugar cane plantations, and the islands’ culture developed from a mixture of African, West Indian, and British influences.

LAND AND CLIMATE OF ANTIGUA AND BARBUDA

Antigua and Barbuda lies at the southern end of the Leeward Islands chain, which is bordered by the Atlantic Ocean to the east and the Caribbean Sea to the west. The country has a total area of 442 sq km (171 sq mi), of which Antigua accounts for 280 sq km (108 sq mi), Barbuda for 160.6 sq km (62 sq mi), and Redonda for 1.3 sq km (0.5 sq mi). The capital, largest town, and main port is Saint John’s, on Antigua. The country’s nearest neighbors are the islands of Saint Kitts and Nevis to the west, Montserrat to the southwest, and Guadeloupe to the south.

Antigua is low-lying with rolling hills made up of volcanic rock, coral, and limestone. Its highest point is Boggy Peak at 470 m (1,542 ft). The coastline is composed of coves and bays and is known for its 365 beaches. Barbuda is a flat coral island with areas of mangrove swamp and sandy beaches. Coral reefs encircle the island. Redonda is a small, uninhabited rocky islet.

The climate of the islands is tropical, but drier than that of the other Leeward Islands. Rainfall averages 1,000 mm (40 in) a year; other low-lying islands of the group receive about 1,250 to 2,000 mm (50 to 80 in). The wettest months are July to November. Temperatures range from 21° to 32°C (70° to 89°F), with the coolest months being January to March. The islands are at risk from tropical storms and hurricanes.

PLANTS AND ANIMALS OF ANTIGUA AND BARBUDA

The native forest on Antigua was cleared by settlers to grow the sugarcane that was once the main export, and there are now few areas of woodland. Land animals are also scarce. However, the islands have a tremendous variety of birds, including many colorful tropical varieties. Barbuda has a colony of frigate birds, avian pirates who steal food from other birds; the males are known for the beauty of their puffed-up red chests. Hawksbill turtles, an endangered species, lay their eggs on the beach at Pasture Bay, Long Island, which lies just off Antigua.

POPULATION OF ANTIGUA AND BARBUDA

More than 91 percent of the population is black, descended from African slaves brought to work on the sugar plantations. Most of the remainder is of mixed ethnic origin or white, although there are also minorities of Syrian-Lebanese, East Asian, and Native American descent.

Religion in Antigua and Barbuda

Christianity is the religion of the vast majority of the population, with about three-fourths of the people belonging to Protestant denominations, mainly Anglican, Moravian, Methodist, and Seventh-Day Adventist. There are also Roman Catholics, Jehovah’s Witnesses, and Rastafarians.

Languages spoken in Antigua and Barbuda

English is the official language of Antigua and Barbuda. However, Leeward Caribbean Creole English, an English-based creole, is the language used in informal situations by the majority of the population. Arabic, Portuguese, and some Indian languages are nonindigenous languages spoken by minorities in some parts of the islands.

Culture of Antigua and Barbuda

Antigua holds a celebrated carnival at the end of July, with costumed dancing through the streets behind steel bands. Barbuda has a smaller carnival in June, known as caribana. The game of cricket is also quite popular in Antigua and Barbuda, and the islands have produced some famous cricket players in modern times: the fast bowlers Andy Roberts and Curtly Ambrose, and the batsman Vivian Richards.

ECONOMY OF ANTIGUA AND BARBUDA

The economy of Antigua and Barbuda is dependent on tourism and offshore banking. The country’s gross national product (GNP) is about U.S.$759 million (2004 World Bank estimate), giving a per capita income of U.S.$11,050. Hotels and restaurants contribute about one-fourth of the gross domestic product (GDP), and the industry employs around one-third of the labor force. In 2006 there were 273,000 tourists (including cruise-ship visitors). The tourism receipts are some U.S.$338 million a year, compared with merchandise exports of U.S.$60 million. There has been considerable investment in infrastructure to support the tourist industry, including the expansion of airport and harbor facilities, road improvements, and hotel construction.

The country’s economy is at the mercy of the weather, however. Hurricanes can be devastating, driving tourists away and causing hotels to remain closed for repairs for months. In the past the decline in tax income and budget revenues and increase in public spending on repairs due to hurricane damage has forced the government to introduce austerity programs.

ENVIRONMENTAL CONCERNS OF ANTIGUA AND BARBUDA

The growth of the tourist industry has created some environmental problems, including uncontrolled disposal of sewage from hotels on the beach. Hotel development also threatens the Antiguan mangrove trees. Water management is another major area of concern because of limited natural freshwater resources. Coral reefs that surround the islands have suffered disturbance to their ecosystem as a result of fishing, which has nearly doubled since 1980.

GOVERNMENT OF ANTIGUA AND BARBUDA

Antigua and Barbuda is a constitutional monarchy. The British monarch, represented by a governor-general, is the head of state.

Executive and Legislature of Antigua and Barbuda

The prime minister is the head of government. There are two legislative houses, the House of Representatives and the Senate; both have 17 seats. One of the seats in the House of Representatives is allocated to Barbuda and all members are elected for up to five-year terms by universal adult suffrage. The Senate is composed of 11 members appointed by the governor-general on the advice of the prime minister, 4 on the advice of the leader of the opposition, 1 at the discretion of the governor-general, and 1 on the advice of the Barbudan Council, which is responsible for local government on that island.

The two main political parties in Antigua and Barbuda are the United Progressive Party (UPP) and the Antigua Labour Party (ALP). The Barbuda People’s Movement (BPM) is one of the larger minority parties.

Health and Welfare in Antigua and Barbuda

The state provides free medical care, and the social security system supplies benefits for senior citizens and sick or disabled people. Life expectancy is 72.8 years for males and 76.8 years for females (2009).

HISTORY OF ANTIGUA AND BARBUDA

The first inhabitants of the islands were the Ciboney, who were related to the Arawak. Archaeological evidence points to settlements dating from around 2400 BC. Between AD 35 and 1100 the Arawak lived on Antigua, but the Carib were in residence at the time of the arrival of Christopher Columbus in 1493, during his second voyage. He named the island Santa María de la Antigua after a church in Seville, Spain, but did not settle it. Subsequent attempts by both the French and Spanish to establish colonies were fought off by the Carib.

It was not until 1632 that Antigua was successfully colonized by the British. Apart from a brief interlude of French rule in 1666, the island and its dependencies, Barbuda and Redonda, remained under British control until independence in 1981.

The first sugar plantation was established in 1674 by Sir Christopher Codrington. Barbuda, colonized by the British in 1678, was leased by the Codrington family until the late 19th century, when it reverted back to the British crown. It was used by them to raise provisions for the slaves introduced to clear the forests of Antigua and plant sugarcane.

Antigua was a valuable colony, not only for the sugar grown there, but also for its deep natural harbors, notably at Saint John’s and at Falmouth on the southeastern side of the island. Ships were refitted there safe from attack, and during the 17th and 18th centuries fortifications were built, many of which still survive, notably Shirley Heights and Nelson’s Dockyard in Saint John’s.

Horatio Nelson, a famous British naval commander, served for nearly three years in Antigua as a young man, and visited the island again in 1805 during his pursuit of a French fleet, which ended with the Battle of Trafalgar. The future king William IV was also on Antigua, as a young midshipman, in the 1780s.

Slavery was abolished on the islands in 1834, but the resulting freedom was limited and brought little respite from the harsh working conditions on the sugar estates. There was no land available for the freed slaves and the plantation owners continued to treat them as they had before. By the 20th century tension had risen and workers protested violently against low wages, food shortages, and poor living conditions. In 1939 the first labor movement was formed to try to resolve persistent problems.

Rise of the Antigua Labour Party

Vere Cornwall Bird became the president of the labor movement in 1943 and, with other trade unionists, formed the Antigua Labour Party (ALP). In 1946 the ALP won the first of many elections. Bird, his family, and the ALP then dominated Antiguan politics for decades.

In 1967 Antigua attained associated status with the United Kingdom, an arrangement that gave it full internal self-government. It achieved independence in November 1981 as a single territory with Barbuda, despite a campaign for separate independence by the Barbudans. As a concession to enable independence to go ahead, Barbuda was granted considerable internal autonomy. However, the pressures for separation have not gone away; the Barbudan People’s Movement, which advocates self-government, has since dominated Barbuda’s politics. Antigua and Barbuda is a member of the Commonwealth of Nations.

Bird was the first prime minister after independence and remained in office until his retirement in 1993. He was succeeded by one of his sons, Lester Bird, following the general election of 1994. After his election, Lester Bird tried to portray a professional image as prime minister and paid particular attention to the economy.

However, scandals and allegations of corruption beset Lester Bird’s family and the government. In 1990 an international arms-smuggling ring was exposed and a judicial inquiry investigated the involvement of Lester’s brother, Vere Bird, Jr. In 1996 another brother, Ivor Bird, was arrested and fined for handling cocaine. At the same time, Lester Bird’s finance minister was forced to resign amid controversy over his alleged failure to pay customs duty on an imported vintage Rolls-Royce car.

The offshore banking sector has also come under pressure to reform, following allegations of money laundering. In February 1997 the government closed down five Russian-owned banks that were suspected of laundering money.

In spite of the scandals, Lester Bird’s Antigua Labour Party was reelected in 1999. Bird appointed several new ministers, among them his brother Vere, Jr., who had been banned from public office since 1990. In the 2004 general election, however, the opposing United Progressive Party won a majority in the House of Representatives. Lester Bird conceded defeat and handed over the prime ministership to Baldwin Spencer of the UPP.