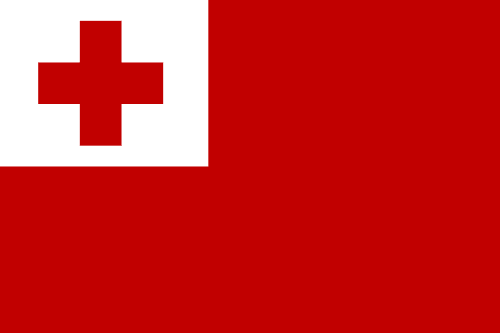 LAND AND RESOURCES OF TONGA

Tonga consists of more than 150 islands spread over approximately 360,000 sq km (approximately 140,000 sq mi) of the Pacific Ocean. They are divided into three main groups—Tongatapu, Ha’apai, and Vava’u. About 40 of the islands are inhabited. With inland waters and several outlying islands, the country has a total land area of 750 sq km (290 sq mi). Tongatapu, with a total area of about 260 sq km (100 sq mi), is the largest island. The eastern islands, including Tongatapu, are coral formations, while islands of volcanic origin lie in the west. The highest point in Tonga is Mount Kao (1,030 m/3,379 ft), a volcano forming Kao Island in the Ha’apai group. Several islands have active volcanoes. Volcanic ash creates fertile soil, and the islands are well-vegetated. However, deforestation, caused by land being cleared for agriculture and settlement, is an increasing problem.

The natural plant and animal life are limited, but include hibiscus plants and giant flying foxes, a species of bat. Domestic animals include horses, cattle, pigs, and chickens. Marine life is abundant and provides an important source of food.

The climate is tropical with high humidity and an average daily temperature range of 16° to 29°C (61° to 84°F). Precipitation averages 1,610 mm (63 in) a year. The rainiest months are from December to April, which roughly coincides with the cyclone season. Cyclones occur every few years and are quite destructive.

THE PEOPLE OF TONGA

The population of Tonga (2009 estimate) is 120,898, giving the country an overall population density of 169 persons per sq km (437 per sq mi). The population is unevenly distributed, however, and about two-thirds of the people live on Tongatapu, including one-fifth of the population that reside in Nukualofa (population, 2003 estimate, 35,000), the capital town. Neiafu, a smaller urban area, is located on Vava’u. The remainder of the population is scattered over 35 other permanently inhabited islands. Most of Tonga’s people are Polynesians; only 2 percent consists of members of other ethnic groups. English and Tongan, a Polynesian language, are the official languages. Tongan is preferred for everyday communications. English, which is taught as a second language in schools, is used mainly for business.

Tonga’s population has been almost entirely Christian for more than 100 years. The vast majority are Protestants, belonging to one of four branches of Methodism. The Free Wesleyan Church, the largest, is headed by Tonga’s monarch. The Church of Jesus Christ of Latter-day Saints, Catholicism, and other Christian denominations are minority religions.

Education is free and compulsory for children from the ages of 6 to 14. Most primary schools are operated by the government, while most secondary schools are sponsored by churches. At 99.2 percent, Tonga’s literacy rate is among the highest in the Pacific. The University of the South Pacific Extension Center and ‘Atenisi Institute (1971), a private Tongan institution that offers several degree programs, are located in Nukualofa.

Tonga has retained much of its Polynesian culture. There is respect for traditional authority and customs, and the lifestyle is conservative. Christianity has been thoroughly integrated into Tongan society. All commerce and recreation are prohibited on Sundays, the Christian day of rest, and much of Tongan social life is structured around the church. Western-style houses, usually constructed from wood and topped with corrugated tin roofs, are common in urban areas. Housing in rural areas is a combination of Western-style dwellings and fales, traditional Tongan homes constructed of woven coconut leaves. Western-style clothing is common for everyday use. Women typically wear dresses and men are required by law to wear shirts in public places. Urban Tongans rely on imported foods. People in rural areas are largely self-sufficient, relying on foods from their gardens and fish caught from the ocean. Everyone is expected to contribute to the well-being of the extended family, which typically includes parents, siblings, grandparents, aunts, uncles, and cousins. Men head the extended family, while women typically play supportive roles.

Competitive sports such as soccer and rugby are popular. The Tongan National Center, located in Nukualofa, displays and promotes Tongan culture and art, including Ngatu, a decorative bark cloth made by Tongan women. Tongan artisans also create weavings and wood carvings.

Agriculture and fishing are the chief economic activities in Tonga, employing about 70 percent of the people. About 50 percent of the population works predominantly at a subsistence level. The principal cash crops are pumpkins, coconuts, bananas, and vanilla, which account for one-third of Tonga’s exports. Still, much food needs to be imported. A shortage of land is a problem, and many Tongans seek employment overseas. Industry, including construction, manufacturing, and mining, employs the second largest number of people. Nukualofa has a small industrial park. Manufactured goods include concrete blocks, small excavators, clothing, and furniture. New Zealand, Australia, and Japan are Tonga’s principal trading partners.

The national currency is the pa’anga, which is equal to 100 seniti (2 pa’anga equal U.S. $1; 2007 average). Increased imports in recent years have created a trade deficit. However, tourism, money sent home by Tongans working abroad, and external aid help offset the negative balance of payments, allowing Tonga to maintain a reasonably well-balanced budget. In 2007 Tonga became a member of the World Trade Organization (WTO), which was expected to help the country develop greater trade ties. The United Kingdom, New Zealand, and Australia are the country’s principal aid donors.

Tongatapu Island and the area around Neiafu on Vava’u have a network of paved roads. Elsewhere, roads are of crushed coral or dirt, making them difficult to use by automobiles during periods of heavy rainfall. An international airport is located at Fua’amotu, 21 km (13 mi) from Nukualofa. Domestic air travel from Tongatapu to ‘Eua, Ha’apai, Vava’u, Niuatoputapu, and Niuafo’ou islands is provided by government-owned Royal Tongan Airlines. With the exception of Tongatapu and Vava’u, the islands have unpaved runways that can only accommodate small craft. Several airlines, including Royal Tongan Airlines, provide frequent international flights to Fiji, New Zealand, Australia, and the United States. Radio broadcasting and a weekly newspaper are controlled by the government. Several privately owned publications are distributed bimonthly or monthly, and there is a privately owned television station.

Tonga is a hereditary constitutional monarchy governed under a constitution promulgated in 1875 and revised in 1967. King George Tupou V is the head of state. The Privy Council, which includes the king and the cabinet, is the highest executive body. Cabinet members, who are appointed by the king, hold their positions until they reach retirement age. The prime minister serves as the head of government. The parliament, known as the Fale Alea, or Legislative Assembly, consists of the cabinet, nine representatives elected by Tonga’s 33 nobles, and nine representatives elected by the people. Elections are held every three years; all citizens aged 21 and over are eligible to vote. The Privy Council acts as the Court of Appeal, except for criminal cases, and appoints the Supreme Court judge. The country has a small defense force of about 200 and a separate police force. Tonga is a member of the United Nations (UN), the Commonwealth of Nations, and the South Pacific Forum, a regional organization that addresses the foreign affairs and international trade of its member countries. The country also belongs to several UN agencies, including the World Health Organization (WHO) and the International Monetary Fund (IMF).

The Tongan Islands were probably settled from Fiji about 3,500 years ago. Tonga developed as a highly stratified society with social classes and paramount chiefs. Warfare was common as chiefs competed to expand their respective domains.

In 1616 Dutch explorers became the first Europeans to visit Tonga. They were followed by the British explorer Captain James Cook, who made three visits between 1773 and 1777; Cook named Tonga the Friendly Islands, due to the welcome he received. Wesleyan Methodist missionaries arrived from England in the 1820s and began a successful conversion of the islanders. The missionaries converted paramount chief Taufa’ahau Tupou in the 1830s and he persuaded others to follow. Tupou, who became known as George Tupou I, consolidated three chiefly lines and founded the monarchy in 1875. Upon his death, he was succeeded by his grandson, George Tupou II. Owing to internal strife on the islands, Tonga and the United Kingdom negotiated a Treaty of Friendship and Protection in 1900, establishing Tonga as a British Protected State. Great Britain had great influence over the kingdom for the next seven decades, but the country was never formally colonized. When Tupou II died in 1918, his daughter Queen Salote Tupou III succeeded to the throne. She in turn was succeeded by her son, King Taufa’ahau Tupou IV. On June 4, 1970, Tonga became completely independent of the United Kingdom.

Tonga’s relatively high level of education has made some Tongans dissatisfied with the current political structure. Insisting that the monarchy in its present form has outlived its time, these Tongans organized a political organization, the Pro-Democracy Movement, in November 1992 and held a prodemocracy convention that same month. It was boycotted by the monarchy and the government refused to allow publicity of the event or grant visas to foreign speakers. The Pro-Democracy Movement formed the People’s Party in 1994, Tonga’s first political party. In 2007 Tonga became a member of the World Trade Organization (WTO). Membership in the WTO was expected to help Tonga improve its economy by developing trade ties with a wide range of nations.

After the death of King Taufa’ahau Tupou IV in 2006, the succession went to his son, who was crowned King George Tupou V in 2008. The king pledged to follow up on promised reforms that were made after protests turned riotous in 2006. Among the promised reforms was direct popular election of most members of the parliament.