INTRODUCTION OF SÃO TOMÉ AND PRÍNCIPE 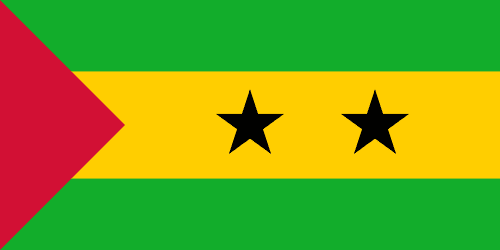 São Tomé and Príncipe, republic, located off the western coast of Africa, in the Gulf of Guinea (an arm of the Atlantic Ocean). The republic comprises the islands of São Tomé, Príncipe, and several small islets. It covers an area of 1,001 sq km (386 sq mi).

LAND AND RESOURCES OF SÃO TOMÉ AND PRÍNCIPE

The islands are volcanic in origin, with mountainous interiors and fertile soils. The highest point is Pico de São Tomé (2,024 m/6,640 ft) on São Tomé. Lowlands flank the northeastern and southwestern coasts of the islands. The climate is tropical with virtually no seasonal temperature variations. The average annual temperature is 25°C (77°F) in the lowlands and about 18°C (65°F) in the highlands. The average annual rainfall varies greatly with elevation, from 5,100 mm (about 200 in) on the southwestern mountain slopes to 1,020 mm (about 40 in) in the northeastern lowlands. A dry season lasts from June to September.

Uncontrolled logging is a continuing problem in the country’s primary forests. Soil exhaustion and erosion are additional problems.

PEOPLE OF SÃO TOMÉ AND PRÍNCIPE

The total population of São Tomé and Príncipe was estimated at 212,679 in 2009. The capital and principal port is São Tomé (population, 2003 estimate, 54,000), located on the northeastern coast of São Tomé island. The population, descendants of peoples who came to the islands beginning in the late 1400s, is composed of six identifiable groups: mestiço, or mixed-blood; angolares, descendants of Angolan slaves; forros, descendants of freed slaves; serviçais, contract laborers from nearby African countries; tongas, children of serviçais born on the islands; and Europeans, mostly from Portugal. Portuguese is the official language, but 90 percent of the people speak Fang, a Bantu language. Most of the people are Christians; 75 percent are Roman Catholic.

ECONOMY AND GOVERNMENT OF SÃO TOMÉ AND PRÍNCIPE

The economy of São Tomé and Príncipe is dependent on plantation agriculture, particularly cacao production. The major plantations were nationalized after independence in 1975. In 2007 the gross domestic product, which measures the total value of goods and services produced in the country, was $144.7 million, or $915.90 per inhabitant. The leading agricultural products are cacao, coconuts, copra, melons, and bananas. Cacao accounted for 60 percent of export earnings in the early 1990s. Because agriculture is dominated by export crops, 90 percent of the country’s food must be imported. The unit of currency is the dobra (13,537 dobra equal U.S.$1; 2007 average).

Under São Tomé and Príncipe’s 2003 constitution, the country is a multiparty democracy. The chief executive is a president, elected to a five-year term, renewable once. Legislative power is vested in the National Assembly, whose 55 members are elected to four-year terms.

In 1994 the legislature approved a bill granting autonomy to Príncipe. Príncipe assumed this status after holding elections in March 1995 for a five-member regional government and a seven-member regional assembly. The government of Príncipe is under the authority of a minister appointed by the president of the republic of São Tomé and Príncipe.

HISTORY OF SÃO TOMÉ AND PRÍNCIPE

The islands were probably uninhabited when first visited by Portuguese navigators in the early 1470s. From 1485 the Portuguese settled convicts and exiled Jews on the islands and developed a thriving slave trade and sugar-growing economy. Cacao was introduced in 1822, and by 1900 São Tomé and Príncipe was a leading world producer. In 1951, São Tomé and Príncipe became an overseas province of Portugal. On July 12, 1975, the country attained independence under the rule of the Movement for the Liberation of São Tomé and Príncipe.

The nation’s first president, Manuel Pinto da Costa, served until 1991, when Miguel Trovoada was elected. On August 15, 1995, Trovoada was deposed in a bloodless coup led by army officers. He was reinstated, however, on August 22, after agreeing to pardon the soldiers who participated in the coup. International threats to cut off aid to the country hastened the restoration of the government. In 1996 Trovoada was reelected to another five-year term. He stepped down in 2001 and Fradique de Menezes, a businessman and former foreign minister, was elected to succeed him.

De Menezes was ousted in a military coup in 2003, but the coup lasted only a week. After fleeing the country, de Menezes returned when the coup leaders agreed to restore democratic rule. In presidential elections in 2006, de Menezes was reelected to another term.