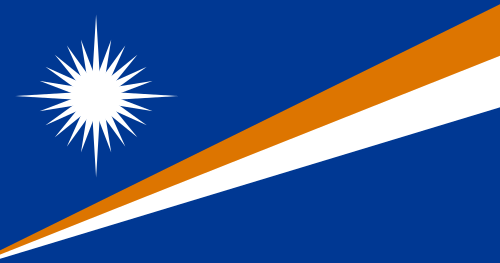 Marshall Islands, island republic in the central Pacific Ocean, located north of the equator in Micronesia. The Marshall Islands comprises 29 atolls, each made up of numerous islets, in two generally parallel groups: the southeastern Ratak Chain and the northwestern Ralik Chain. The chief industries are agriculture and fishing; the major export is copra. The islands are atolls and coral reefs, and the inhabitants are Micronesian. Kwajalein is the largest atoll; Majuro is the capital island.

The islands were sighted by the Spanish in 1526 but remained essentially uncolonized until the late 19th century. They were a German protectorate from 1885 to 1914, when they fell to Japan. In 1920 the archipelago was mandated to Japan. In February 1944 American forces took Majuro, the first Japanese possession captured in World War II. Other islands were subsequently occupied. The archipelago remained under American military control for the duration of the war. In 1946 an American task force used Bikini atoll as a nuclear testing ground. The Marshalls became a trusteeship of the United States in 1947 and self-governing in 1979, with a locally drafted constitution, a popularly elected legislature, and a president. A Compact of Free Association, delegating to the U.S. the responsibility for defense, was approved by plebiscite in 1983 and came into effect in 1986. The trusteeship was formally dissolved by the UN Security Council in 1990, and the country was admitted to the United Nations in 1991. Area, 181 sq km (70 sq mi); population (2008 estimate) 63,174.