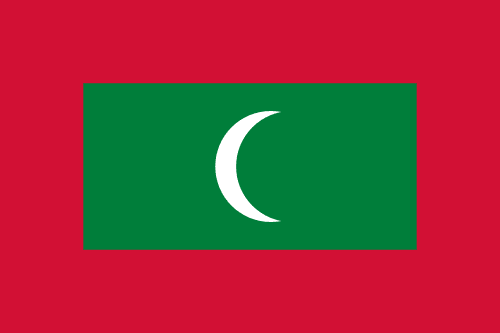 Maldives (formerly Maldive Islands), island republic in southern Asia, located in the northern Indian Ocean, southwest of the southern tip of India. Maldives is made up of a chain of 1,190 small coral islands that are grouped into clusters of atolls. It has a total area of 298 sq km (115 sq mi). The capital and largest city of Maldives is Male (population, 2003, 83,000).

LAND AND RESOURCES OF MALDIVES

The islands are low-lying and have only small tracts of arable land. Vegetation is dominated by coconut palms and breadfruit trees. The climate is tropical and humid. The average annual temperature is 26.7°C (80°F), with little seasonal variation. The average annual precipitation is 1,500 mm (60 in), most of which falls between May and November. The principal natural resource is the marine life of the surrounding seas.

The population of Maldives (2009 estimate) is 396,334, yielding an average population density of 1,321 persons per sq km (3,422 per sq mi). The most populous atolls are Male, the capital and principal commercial center; Suvadiva; and Tiladummati. The people are ethnically heterogeneous, incorporating Indian, Sinhalese, Arabian, and African elements. Islam is the state religion, and nearly all the people are Sunni Muslims. The language is Divehi, an Indo-European tongue related to Sinhalese.

ECONOMY AND GOVERNMENT OF MALDIVES

The Maldivian economy is dominated by fishing, and the total catch in 2007 was 184,158 metric tons. The most valuable species is tuna; corals and shells are also taken. Coconuts are the principal agricultural product; most food must be imported. Industrial activity is largely limited to fish processing and garment manufacturing. The tourist industry is growing; in 2007 some 676,000 tourists visited Maldives, adding $494 million to the economy. The national currency is the rufiyaa which is made up of 100 laari (12.80 rufiyaa equal U.S.$1; 2007 average).

Maldives is a republic governed under a constitution. The country’s first constitution, promulgated in 1968, was replaced by a new constitution in 1998. A constitution approved in 2008 gave Maldives its first bill of rights and direct multiparty elections, along with provisions for the separation of powers between the executive, the judiciary, and the legislative branch known as the Majlis, or Citizens’ Council. Prior to the 2008 constitution, the president of Maldives had been selected by the Majlis and then submitted to the populace in yes-or-no referenda. Critics argued that the system had resulted in a dictatorship.

The islands were settled by Buddhist peoples from southern Asia. Islam was introduced in the 12th century. The Portuguese traded at Male in the latter half of the 15th century. Although the islands were ruled by a local sultan, European influence was established over the area, first by the Dutch in the 17th century and later by the British. In 1887 the Maldives Islands formally became a British protectorate. In 1965 the Maldives achieved independence as a sultanate, and in 1968 the people voted to establish a republic. In 1988, Indian troops were called in to foil a coup attempt by Tamil mercenaries. In 1998 the country adopted a new constitution.

In 2008 Maldives held its first direct, multiparty elections for president under the terms of a new constitution approved the same year. The elections were won by opposition leader Mohamed Nasheed, a former political prisoner, who defeated incumbent president Maumoon Abdul Gayoom. Gayoom had been president since 1978 and was widely regarded as a dictator due to his suppression of opposition forces. As a political prisoner, Nasheed charged that he had been subjected to torture. Nasheed and his Maldivian Democratic Party (MDP) faced a number of challenges, including the threat posed to the very existence of the low-lying Maldives islands by rising sea levels due to global warming.