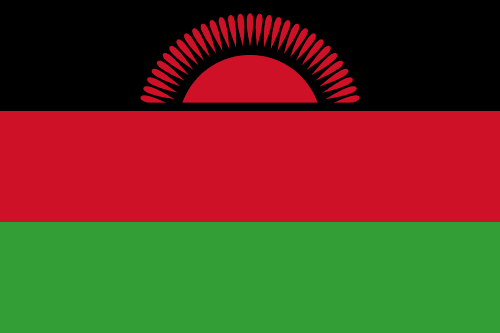 Malawi, republic in southeastern Africa, formerly the British protectorate of Nyasaland, bounded on the north by Tanzania, on the east by Lake Malawi (Lake Nyasa), on the southeast and south by Mozambique, and on the west by Zambia. Malawi extends about 835 km (about 520 mi) north to south and varies in width from about 80 to 160 km (about 50 to 100 mi). The total area of the country is 118,484 sq km (45,747 sq mi), nearly one-fifth of which is water surface, mainly Lake Malawi and three smaller lakes. The capital of Malawi is Lilongwe, and the largest city is Blantyre.

LAND AND RESOURCES OF MALAWI

Part of the Great Rift Valley runs through Malawi from north to south. In this deep trough lies Lake Malawi, the third largest lake in Africa. The Shire River flows from the southern end of the lake to the Zambezi River in Mozambique. To the east and west of the Great Rift Valley the land rises to form high plateaus, generally about 900 to 1,200 m (about 3,000 to 4,000 ft) in elevation but reaching about 2,400 m (about 8,000 ft) in the Nyika uplands in the north. South of Lake Malawi lie the Shire Highlands, which rise to more than 2,700 m (9,000 ft). Sapitwa (Mount Mulanje), central Africa’s highest peak at 3,002 m (9,849 ft), is here.

The climate in Malawi varies with the elevation. In the low-lying Shire Valley it is hot and humid, with temperatures averaging from 21°C (69°F) to 29°C (84°F) depending on the season. In the highlands the climate is more equable. The rainy season lasts from November to April. Annual rainfall averages about 2,300 mm (about 90 in) in the highlands and about 800 mm (about 30 in) in the lowlands.

The resources of Malawi are almost entirely agricultural. Mineral wealth is slight, although some marble, limestone, and coal are produced. A thin forest of small trees covers large parts of the country, and some timber trees grow in the damp ravines of the mountains and along the riverbanks. Baobab grow on the plains near Lake Malawi and in the southern valleys. Acacia and conifers grow in the highlands.

Animal life in Malawi includes elephants, rhinoceroses, giraffes, zebras, monkeys, and several varieties of antelope. Hippopotamuses inhabit the lake shores. Snakes and other reptiles, birds, and insects are plentiful, and the rivers and lakes abound in fish.

Unsafe sewage disposal, agricultural runoff, and soil erosion due to deforestation combine to contaminate much of the country’s fresh water. Only 76 percent (2006) of the population has access to safe water. In addition, erosion causes siltation of rivers and streams, endangering fish populations.

Nevertheless, Malawi has a rich and diverse wildlife population, and about 29 percent (2005) of the country’s total land area remains forested. Experts believe that Lake Malawi has more endemic species of fish than any other lake in the world. Of the country’s total land area, 16.4 percent (2007) is designated protected. Lake Malawi National Park, at the southern end of the lake, was declared a World Heritage Site in 1984. Poaching continues to be a problem in the protected areas, however. The government has ratified international environmental agreements pertaining to biodiversity, climate change, desertification, endangered species, environmental modification, hazardous wastes, marine life conservation, ozone layer protection, and wetlands.

More than 99 percent of the people of Malawi are black Africans. Principal ethnic groups include the Chewa, who constitute 90 percent of the population of the central region; the Nyanja, who predominate in the south; the Tumbuka, who predominate in the north; the Ngoni, an offshoot of the Zulu, who settled in the lower northern and lower central regions in the 1800s; and the Yao, who are mostly Muslim and live along the southeastern border. The rest of the inhabitants, principally settlers of British and Indian origin, form less than one-half of 1 percent of the population. Some 83 percent of the people live in rural villages.

Religion and Languages spoken in Malawi

Christians make up 76 percent of the inhabitants of Malawi. Another 15 percent are Muslim, and 8 percent practice traditional religions. English is Malawi’s official language and is the primary language of instruction in the schools. Chichewa, a Bantu language, is the national language, and a number of other Bantu languages are widely spoken.

In the early 1990s about 1.4 million students attended primary schools. However, after the government made primary education in Malawi free, enrollment increased dramatically. In the 2007 school year 2.9 million students attended 4,841 primary schools. In an effort to reduce overcrowding, the government has recruited more than 20,000 new teachers. Enrollment in secondary schools remains low, however, with only 33 percent of secondary school-aged children attending. The University of Malawi at Zomba (founded in 1964) and its affiliated institutions had 6,500 students in 2007.

Malawi is primarily an agricultural country, with 54 percent of its working force engaged in farming, fishing, and forestry. The nation has traditionally been self-sufficient in food, but malnutrition among children was a serious problem as the 1990s began. The principal crops are corn, sugarcane, fruits, vegetables, and peanuts. Major exports include tobacco, tea, sugar, and peanuts. A growing fishing industry, producing for domestic needs, is centered at Nkhotakota on the western shore of Lake Malawi. In 2007 the catch was 72,787 metric tons. Major manufactures, principally for domestic consumption, include processed food, chemical products, textiles, and beverages. The national budget for 1992 included revenues of $416 million and expenditures of $498 million. Many Malawians work as migratory laborers in South Africa and other countries.

Some 97 percent of Malawi’s electricity is produced by hydroelectric facilities. In 2006 Malawi generated 1,130 million kilowatt-hours of electricity.

Currency and Foreign Trade in Malawi

In 2007 the value of exports was $813 million. Imports, which typically consist of manufactured goods, fertilizers, machinery, motor vehicles, textiles, and petroleum, were valued at $1,184 million. Malawi’s principal trading partners for exports are South Africa, Germany, Japan, the United States, and Mozambique; chief partners for imports are South Africa, Germany, the United Kingdom, and the United States.

Transportation and Communications in Malawi

With the completion of a line from Salima to Mchinji on the Zambian border in 1980, Malawi owns 797 km (495 mi) of operated railroad track. Total road mileage in 2003 was 15,451 km (9,601 mi), of which only a small portion was paved or gravel surfaced. Passenger and freight traffic on Lake Malawi is extensive. Air Malawi provides domestic as well as international service.

In 2004 Malawi had 2 daily newspapers, with a combined circulation of 25,000. The Daily Times, published in Blantyre, is the most widely read daily newspaper. The government operates the postal and telegraph service. Radio transmitters are located in Blantyre and Lilongwe. The country has an estimated 8 telephone mainlines and 501 radios for every 1,000 inhabitants.

Under the country’s latest constitution, which went into effect in 1995, Malawi is a republic with an elected president, who is both the head of government and the head of state. Cabinet ministers are responsible to the president, who is elected to a five-year term by universal adult suffrage.

The parliament of Malawi is the unicameral National Assembly, made up of 193 members who are popularly elected to terms of up to five years, with additional members nominated by the president. The Malawi Congress Party (MCP) was the sole legal political party from 1966 until 1993; the first multiparty elections were held in 1994. The MCP and the United Democratic Front (UDF) hold most of the seats in parliament.

Judiciary and Local Government of Malawi

The judicial system comprises a Supreme Court of Appeal, a High Court, magistrates’ courts, and local courts. The high court has unlimited jurisdiction in all civil and criminal cases and hears appeals from lower courts. Popularly elected councils in Malawi’s 24 districts and 8 municipalities are responsible for all government services within their areas.

In 2006 the total strength of Malawi’s armed forces was 5,300. In addition, the country had a paramilitary national police force of 1,000 members.

Some evidence of Stone Age and later Iron Age settlements has been found around Lake Malawi. Bantu peoples moved into the territory in the 1st millennium AD. By the 16th century a Malawi kingdom, from which the present name of the country is derived, had a prospering trade with the coastal areas of Mozambique.

Jesuit missionaries from Portugal visited the territory near Lake Malawi as early as the 17th century, but the lake probably was not known to Europeans until Scottish missionary and explorer David Livingstone reached its shores in 1859. European involvement began in 1875 and 1876, when Scottish church missions were established; a British consul was stationed in the country in 1883. Subsequent warfare with Arab slave traders and fear of Portuguese expansion from Mozambique led to a mission by British explorer and colonial official Harry Johnston, who negotiated treaties with the indigenous rulers. In 1891 the treaties resulted in a formal declaration of a British protectorate, called the Nyasaland Districts Protectorate. Beginning in 1893, it was known as the British Central Africa Protectorate, and in 1907 the area was officially designated the Nyasaland Protectorate. In 1915 John Chilembwe, an African preacher, staged a short, bloody uprising in response to the treatment of Africans by British colonists. The uprising is considered a forerunner of later nationalist movements.

After World War II (1939-1945), nationalist movements gained strength. From 1953 the protectorate was joined for ten years in a federation with Northern Rhodesia and Southern Rhodesia (now Zambia and Zimbabwe), called the Federation of Rhodesia and Nyasaland. However, this federation was heavily opposed by nationalists who advocated political freedom from British rule. Following the federation’s dissolution in 1963, Nyasaland achieved internal self-government, with Hastings Kamuzu Banda, leader of the Malawi Congress Party (MCP), as the first prime minister. The protectorate gained independence on July 6, 1964, under its new name, Malawi. It was declared a republic on July 6, 1966, and Prime Minister Banda was elected president by the National Assembly.

Under the Banda regime Malawi embarked on a vigorous program of economic development. In international affairs Banda held to a firm policy of neutrality in the dispute between the United Kingdom and the government of Rhodesia (known as Southern Rhodesia before 1964), maintaining extensive trade relations with Rhodesia’s rebellious white minority government. He also continued friendly relations with Mozambique (until 1975 governed by Portugal) and in 1967 signed a trade pact with South Africa.

In November 1970 the constitution of Malawi was amended to make Banda president for life, effective the following year. Maintaining good relations with then white-dominated South Africa, he became the first black African head of state to visit that country. His policy of cordiality toward South Africa brought serious criticism from the leaders of other black African countries, and the influence Banda could exert on continental affairs was minimal.

The first parliamentary elections since independence were held in 1978. Although only the MCP participated, a majority of the incumbent members were defeated; participation in the 1983, 1987, and 1992 elections was also restricted to the MCP. Malawi’s economy performed sluggishly in the early 1990s, burdened by foreign debt and by an influx of Mozambican refugees. Meanwhile, Banda faced rising domestic discontent and international criticism of his human rights record.

Change swept through the government in May 1994, as a new constitution was approved, followed by Malawi’s first multiparty elections. Bakili Muluzi, the leader of the United Democratic Front (UDF) and a former federal cabinet member, defeated Banda for the presidency and formed a UDF-dominated government. In keeping with the new constitution, which established a human rights commission, Muluzi freed political prisoners and closed three prisons where tortures were reputed to have taken place. In June 1999 presidential and legislative elections, Muluzi was reelected but the UDF failed to secure a majority in the National Assembly, winning just less than half the total seats. Muluzi stepped down in May 2004 after two terms in office, and voters elected Bingu wa Mutharika of the UDF as Malawi’s next president.