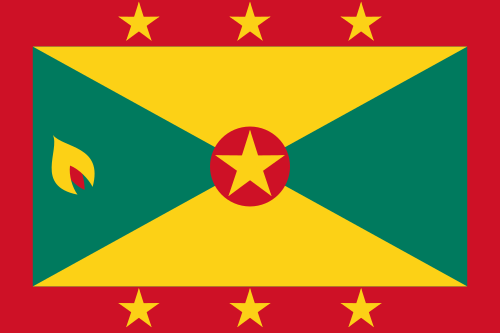 Grenada, independent country in the West Indies consisting of the island of Grenada and several tiny islands in the southern Grenadines. The largest of the attached Grenadines is the island of Carriacou, to the northeast. The country has a total area of 344 sq km (133 sq mi), making it the second smallest nation in the Western Hemisphere. Only Saint Kitts and Nevis is smaller. Grenada island itself has an area of 311 sq km (120 sq mi).

Grenada and its dependent islands in the southeastern Caribbean Sea are the southernmost of the Windward Islands. The capital, largest town, and principal port is Saint George’s, located on the southwestern coast of Grenada. In the center of the island lie volcanic mountains covered with dense rain forest. All the islands have a tropical climate, with a rainy season from June to December. Spices, such as nutmeg and cloves, thrive on the island and give Grenada its nickname “the spice island of the Caribbean.”

Grenada was once divided into large plantations owned by British colonists and worked by African slaves. The slaves’ descendants, who form the bulk of the present population, live mostly on small farms and raise food crops, such as yams, sweet potatoes, and cassava. Nutmeg, bananas, and cacao are grown for export. Grenada’s growing tourist trade is the largest source of income.

Grenada has a parliamentary government. In 1979 a leftist government took power in a coup d’état. In 1983 the country’s leader, Maurice Bishop, was killed by hardliners within his own political party. United States forces invaded Grenada a week later, with troops from seven other Caribbean countries. Parliamentary government was restored the next year.

Grenada island measures about 34 km (21 mi) in length by 19 km (12 mi) in width. The heavily wooded, mountainous island is of volcanic origin. The highest peak is Mount Saint Catherine (840 m/2,756 ft). Valleys interspersed between the mountains are picturesque and fertile, and many contain swift-flowing streams. Lakes fill several volcano craters high in the mountains. The island also has hot springs, several mountain lakes, and excellent beaches. The beaches consist mainly of black volcanic sand. Coral reefs fringe much of the coastline.

The climate of Grenada is tropical, with an average annual temperature of 28°C (82°F) along the coast. A rainy season lasts from June to December, with November the wettest month. Annual rainfall ranges from 1,000 mm (40 in) in the southwest to 3,800 mm (150 in) in the mountains. Grenada lies on the southern edge of the Caribbean hurricane belt and was hit hard in 2004 by Hurricane Ivan.

Tropical rain forests in the interior of Grenada contain teak and mahogany trees. Mangroves grow in swamps near the coast. Wildlife is abundant. Animals include the nine-banded armadillo, mona monkey, green iguana, and Indian mongoose. Many tropical birds and unusual tropical flowers also thrive on the island.

The population of Grenada (2009 estimate) is 90,739. More than a third of the people live in Saint George’s, the only town on the island. The population is quite young: A third of Grenadians are under the age of 15. The people are predominantly black, and just over half are Roman Catholic. The remainder are mostly Protestant or Anglican. English is the official language, but most Grenadians speak an English-based Creole as their first language. A French-based Creole is also spoken, mainly by older people.

The vast majority of Grenada’s people are the descendants of Africans brought to the islands to work as slaves in the 18th and 19th centuries. People of South Asian and European descent also form part of the population. Many Grenadians have immigrated to the United Kingdom, to the United States, and to other Caribbean islands in search of greater economic opportunities.

Education is free and compulsory for children between the ages of 5 and 16. Classes are taught in English, and students at public schools wear uniforms. Grenada has a literacy rate of 98 percent. There are teacher training, technical, and agricultural colleges on the island. St. George’s University was founded in 1977 as a medical school; many of its medical students come from the United States.

Agriculture and tourism provide the foundation of Grenada’s economy. Grenada’s gross domestic product (GDP) in 2007 was $604.8 million, giving a per capita GDP of $4,060. (GDP is a measure of the value of all the goods and services a country produces.) The principal export crops are the spices nutmeg and mace. Grenada is the world’s second largest producer of nutmeg after Indonesia. Other crops grown for export include cacao, citrus fruits, bananas, cloves, and cinnamon. Most farms on Grenada are small. Cereal grains and root vegetables, such as cassava and yams, are grown for local use. Shrimp and fish also are part of the local diet.

Tourism is of growing importance to Grenada’s economy. The island has a pleasant climate, sandy beaches, and lush tropical forests. The expansion of the main airport and the improvement of hotel accommodations during the 1990s turned tourism into the country’s main source of revenues. Grenada uses the East Caribbean dollar of 100 cents (2.70 East Caribbean dollars equal U.S.$1).

Manufacturing industries in Grenada are mostly on a small scale. They produce beverages, such as rum from sugarcane grown on the island, and beer; foodstuffs, such as flour from locally grown wheat; and textiles. Another industry is the assembly of electronic parts for export.

Grenada is an independent state within the Commonwealth of Nations. Grenada recognizes the British monarch as its own monarch and head of state. The monarch is represented by a governor-general. Grenada has a parliamentary system of government and a written constitution that was adopted in 1973. The constitution was suspended and the parliament dissolved after a coup d’état in 1979. Following a second coup and the United States-led military intervention in 1983, an Interim Advisory Council ruled Grenada until the constitution and parliamentary government were restored in December 1984.

Grenada is a member of the Organization of American States and the United Nations. From 1958 to 1962, it was a member of the West Indies Federation, and in the early 1960s it participated in unsuccessful attempts to form a federation linking the Leeward Islands and Windward Islands. Grenada is tied with other Caribbean countries through membership in the Caribbean Community and Common Market (CARICOM).

Grenada was originally inhabited by Arawak Indians, who were killed or driven away by the warlike Caribs before the 15th century. Christopher Columbus was the first European to land on the island during his third voyage in 1498, and he named it Concepción. Later Spanish sailors called the lushly forested island Granada, after the city in southern Spain. The Caribs resisted all attempts at settlement by European nations, and the island remained uncolonized for more than 150 years.

The French founded a settlement at the site of Saint George’s in 1650, and the Carib defenders were defeated the following year. The French built fortifications around the harbor at Saint George’s and resisted British efforts to seize the island for the next century. The British successfully invaded the island in 1762 during the Seven Years’ War and acquired Grenada by the treaties of Paris in 1763 and 1783, after the French recaptured it in 1779.

During the 18th century the British established sugar plantations on Grenada and brought Africans to work them as slaves (see Atlantic Slave Trade). In 1795 Julien Fédon, a black planter inspired by the French Revolution, led a violent slave rebellion that the British crushed only with great difficulty. Natural disasters in the late 18th century destroyed the sugar fields and led to the planting of nutmeg and other valuable spices. The slaves were freed in 1834, and many indentured servants from the Indian subcontinent were brought to Grenada as agricultural workers.

Grenada was part of the British Windward Island colony from 1833 to 1958, when it joined the Federation of the West Indies. When that federation collapsed in 1963, the island attempted to form another ill-fated federation among the British dependencies of the eastern Caribbean. Grenada became an associated British state with autonomy in its internal affairs in March 1967.

Grenada gained full independence from Great Britain on February 7, 1974. In March 1979 an uprising overthrew the elected, but corrupt and dictatorial, government headed by Eric M. Gairy, Grenada’s first prime minister. The coup d’état was headed by Maurice Bishop, founder of the leftist New Jewel Movement, with Jewel standing for Joint Endeavor for Welfare, Education, and Liberation). Bishop likewise ruled dictatorially but also, with Cuban support, tried to introduce populist social reforms. In October 1983 Bishop was killed by hardliners within his movement, who objected to his efforts to improve ties to the United States.

A week after Bishop’s murder—on October 25, 1983—U.S. troops, accompanied by those of seven Caribbean countries, invaded Grenada. About 300 people were killed before an interim government, led by Nicholas Brathwaite, was installed. It remained in office until elections were held in December 1984. The U.S. combat troops were withdrawn by the end of 1983, but contingents of U.S. and Caribbean technical and security advisers remained. U.S. aid of about $90 million helped to repair some of the war damage and to promote tourism.

Parliamentary elections in December 1984 established Herbert A. Blaize, head of the center-left coalition New National Party (NNP), as prime minister. Blaize died in office in 1989, and national elections were held in March 1990. The centrist National Democratic Congress (NDC) emerged as the strongest party and formed a coalition government headed by Nicholas Brathwaite. An economic slowdown prompted by labor unrest led to a decline in Brathwaite’s popularity in 1992 and 1993. In July 1994 Brathwaite announced that he would step down as the head of the NDC and that he would resign as prime minister in 1995.

Agriculture Minister George Brizan was elected as the head of the NDC in September 1994, and in February 1995 he replaced Brathwaite as prime minister. In June 1995 the NNP won 8 out of 15 parliamentary seats in national elections and replaced the NDC as the ruling party. NNP leader Keith Mitchell, a former university professor and minister of public works and communications, was sworn in as the prime minister of Grenada on June 22, 1995. Mitchell called for increased political and economic integration with the nearby Caribbean countries of Dominica, Saint Lucia, and Saint Vincent and the Grenadines, with a view to eventual political federation.

During 1996 Grenada’s politics were dominated by problems in the agricultural sector, notably a deterioration in banana quality that led to a temporary suspension of exports, and an infestation of pink mealybugs that threatened the entire cocoa bean crop. Losses as a result of decreased exports were estimated at $10 million. Grenada’s relations with Cuba improved in early 1997, leading to plans for Cuban assistance in education, health, and agriculture. The NNP retained power in 1999 elections, taking all 15 parliamentary seats and returning Mitchell for a second term as prime minister.

The November 2003 election was closely fought, with the NNP gaining a one-seat advantage over the National Democratic Congress. Keith Mitchell began his third term as prime minister.

In 2004 Grenada was devastated by a Category 4 hurricane. Hurricane Ivan destroyed or damaged about 90 percent of Grenada’s residential housing, including the home of Prime Minister Mitchell. About three dozen people were killed in the hurricane.

The NDC Returns to Power

In legislative elections in 2008, the National Democratic Congress (NDC), led by Tillman Thomas, returned to power with an overwhelming victory. Thomas was elected prime minister as Mitchell failed in his bid for a fourth term.