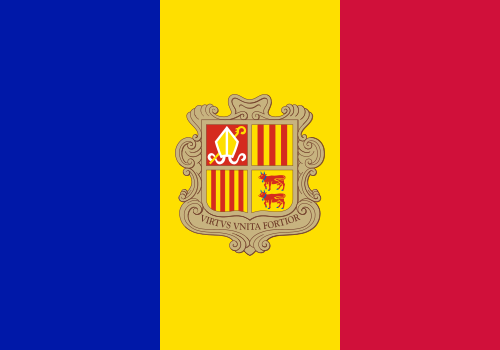 Andorra, country in southwestern Europe, located high in the eastern Pyrenees Mountains between France to the north and Spain to the south. Andorra is one of the smallest nations in the world, with an area of 468 sq km (181 sq mi) and a population (2009 estimate) of 83,888. The capital and largest city is Andorra la Vella (population, 2004 estimate, 22,035).

Andorra is a rugged land marked by deep gorges, narrow valleys, and towering mountains. The lowest part of Andorra stands about 914 m (3,000 ft) above sea level. Due to its alpine location, winters are cold, and heavy snowfall frequently blocks the mountain passes, especially the road linking Andorra to France. Summers are cool, dry, and sunny.

Isolated for centuries, Andorra had become a popular tourist destination by the 1950s. Although tiny, Andorra offers some of the best skiing and snowboarding in the Pyrenees. Great hiking, mountain biking, and stunning alpine scenery attract visitors in summer. But most of the visitors to Andorra are day travelers from France or Spain, who take advantage of Andorra’s duty-free shopping. Merchants selling electronic goods, alcohol, tobacco, and luxury items crowd the streets of Andorra la Vella and other nearby towns.

Tourism is Andorra’s main source of revenue, but some Andorrans still raise sheep and cattle as they have since ancient times. In the summer months, villagers herd livestock up the mountains to graze in alpine pastures. Most of the small patches of land suitable for cultivation are used to grow tobacco.

For more than 700 years Andorra was ruled jointly by the leader of France and the Roman Catholic Bishop of Urgel in northwestern Spain. These leaders, known as the “princes of Andorra,” served as overlords of Andorra. The country formally remains a co-principality (jointly ruled by princes) to the present day. In 1993 Andorrans adopted their first constitution, which established the country as an independent democratic co-principality. Today, the president of France and the Bishop of Urgel remain Andorra’s heads of state, but their roles are largely ceremonial.

LAND AND RESOURCES OF ANDORRA

Andorra occupies a region of gorges and valleys in the eastern Pyrenees. The country is almost completely encircled by high mountains. The Coma Pedrosa, which rises to 2,946 m (9,965 ft), is Andorra’s highest peak.

Over the centuries, settlers have cleared much of Andorra’s original alpine forest cover, including birch, pine, and fir, creating pastures in valleys and on the slopes. Overgrazing by livestock has caused soil erosion in some mountain meadows.

Andorra is drained by the Valira River. Many streams meet to form the Valira, which flows south into Spain. Waterpower is one of Andorra’s few significant natural resources, and it permits the country to produce nearly half of its electricity needs. Andorra has small deposits of iron and lead, but they have not been mined extensively because of the high costs of transportation. Some marble is also quarried.

The citizens of Andorra account for only about one-fourth of the entire population. French and Spanish immigrants, allowed residence in Andorra under a strict quota system, make up the majority of the remaining population. Most native Andorrans trace their ancestry to Catalonia.

Andorra’s official language is Catalan, which is spoken by about 30 percent of the population as a first language. Spanish is spoken by more than half the population, and a small percentage of residents speak French as a mother tongue. Few Andorrans speak English. Roman Catholicism, the religion of 89 percent of Andorrans, exerts a strong influence on social and cultural life.

Most of the people of Andorra live in seven small towns. The capital and largest town is Andorra la Vella, with a population of 22,035. Located on the Valira River in west central Andorra, the town is a center for the retail trade in duty-free goods. Other sizable towns include Escaldes-Engordany, Encamp, Saint Julià de Lòria, and La Massana. The overall population density of Andorra is 186 persons per sq km (482 per sq mi).

Before World War II, Andorra’s economy was based largely on farming and the processing of tobacco and timber (see Forestry). Tourism has boomed since the 1950s and now dominates the principality’s economic life. Andorra receives more than 3 million tourists and more than 8 million excursionists (day trippers) every year. Visitors are drawn by the excellent facilities for winter sports, the sunny alpine climate, the old churches and quaint towns, and the availability of a wide assortment of duty-free goods. Andorra also collects revenues on the sales of its distinctive postage stamps, which are purchased by tourists and collectors.

Financial services emerged as an important facet of Andorra’s economy in the 1990s, aided by strict banking secrecy laws and low business taxes. In 2002 Andorra refused to sign an Organization for Economic Cooperation and Development (OECD) agreement on tax evasion that would have compelled the country to share information about potential tax evasion and make transparent its own banking arrangements.

Because only about 4 percent of Andorra’s land is suitable for cultivation, most food is imported. Nevertheless, farming—especially sheep and cattle grazing and the growing of tobacco—remains a visible feature of Andorran life and culture. Andorra manufactures cigarettes and cigars, and timber harvested from Andorra’s slopes is used to produce furniture. In 2004, the United Nations Educational, Scientific and Cultural Organization (UNESCO) listed Andorra’s Madriu-Perafita-Claror Valley as a World Heritage Site (see World Heritage Committee) for its living tradition of mountain pastoral farming and culture.

Although Andorra is not a member of the European Union (EU), in 1990 it signed a customs union with the EU that regulates the duty-free allowances permitted visitors to the country. In 2002 Andorra adopted the EU’s common currency, the euro. Previously, Andorra had used the Spanish peseta and the French franc, both of which were also replaced by the euro.

Andorra has no railroad or airport but possesses an excellent road system. Even so, heavy traffic frequently clogs the streets of Andorra’s towns. Public television and radio broadcasting services are provided by Andorra Televisió and Radio Nacional d’Andorra. Andorrans also have access to broadcasts from France and Spain. There are two major daily newspapers, el Periodicó and Diari d’Andorra.

For 715 years Andorra was ruled jointly by Spanish and French co-princes—respectively the Bishop of Urgel and, in modern times, the president of France. Under this arrangement, which granted Andorra a limited form of autonomy, responsibility for domestic affairs was delegated to an elected general counsel (Consell General de las Valls). Judicial matters, foreign affairs, and defense remained under the control of the co-princes.

In March 1993 Andorrans voted to end this semifeudal system (see Feudalism) in a referendum establishing Andorra as an independent democracy. Under the constitution approved by the referendum, Andorra’s first-ever executive, judicial, and legislative bodies were set up. The Andorran legislature is the General Council. The council’s 28 members are popularly elected to four-year terms. The executive organ of government is the Executive Council, which is headed by a president (prime minister) who is elected by the General Council and formally appointed by the co-princes. The president appoints the other members of the Executive Council.

Andorra’s constitution permits it to pursue its own foreign relations and to join international organizations of its own choosing. In 1993 Andorra was admitted to the United Nations (UN), and it joined the Council of Europe in 1994. The co-princes formally remain Andorra’s heads of state but retain little real authority; they hold veto power only over legislation affecting Andorra’s borders or security. France and Spain share responsibility for Andorra’s defense.

Andorra has been an independent principality since the early Middle Ages. It is the last surviving remnant of the March States, or buffers states, created by Charlemagne in the early 900s AD to prevent Muslims in Spain from advancing north into Christian France. According to Andorran tradition, Charlemagne granted autonomy to Andorrans as a reward for fighting against the Muslims.

For many years, the right to rule Andorra was disputed by the Count of Foix of France and the Bishop of Urgel of Spain. The dispute was resolved in 1278 when the count and bishop were made joint overlords, or co-princes, of Andorra. The count’s rights later passed to the French crown and later to the president of France. To this day, Andorra pays an annual token tribute, called the questia, alternately to the president of France and to the Bishop of Urgel.

In 1970, women were granted the right to vote. In 1991, representatives of the president of France and the Bishop of Urgel agreed to recognize Andorra’s sovereignty and to permit the principality to draft a constitution. Despite some opposition from traditionalists, a referendum in March 1993 approved a new constitution, which came into force on May 4, 1993. The first general election under the new constitution took place in December 1993, and Oscar Ribas Reig was elected president (prime minister) of the Executive Council. Reig resigned in November 1994 and was replaced by Marc Forné Molné. In elections in February 1997 and March 2001 Molné’s government was overwhelmingly reelected.